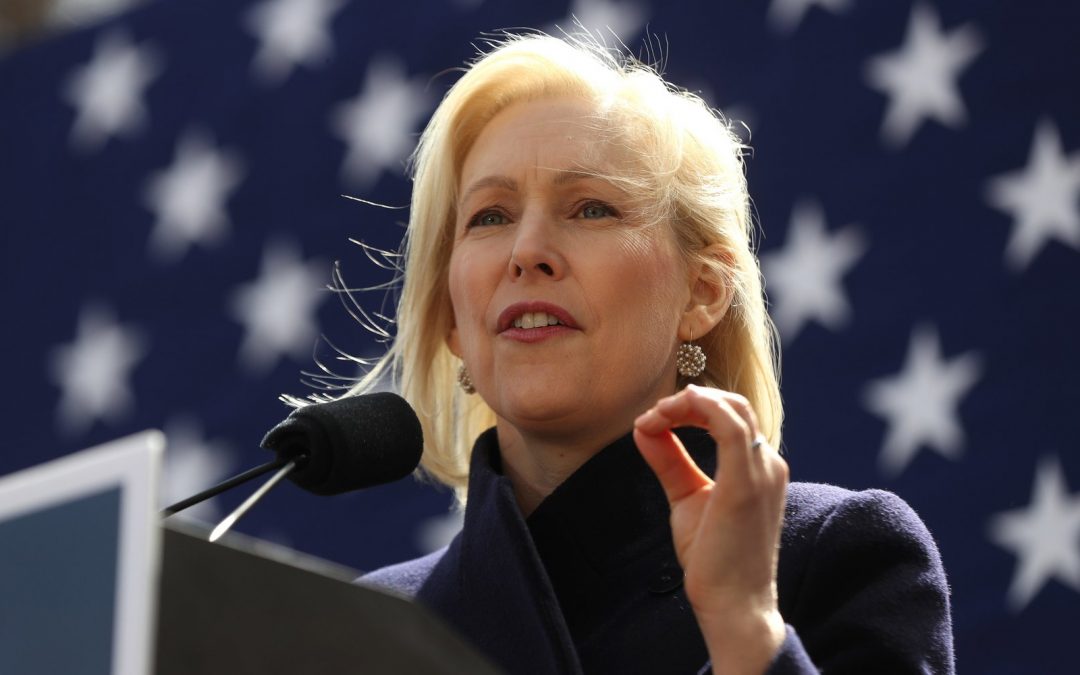 NEW YORK ― Addressing hundreds of supporters in the shadow of the Trump International Hotel in midtown Manhattan, Sen. Kirsten Gillibrand (D-N.Y.) formally announced her campaign for president of the United States.

In Gillibrand’s speech, which elaborated on themes she introduced in a two-minute video advertisement earlier this month, she argued that she possesses the “bravery” needed to defeat President Donald Trump and overcome his divisive legacy.

Drawing on the “Star-Spangled Banner” line, “in the land of the free and the home of the brave,” the speech and video that preceded it framed Gillibrand’s career and candidacy as an extension of intergenerational struggles for racial, gender and economic equality that have succeeded thanks to individual acts of courage.

Gillibrand cited her work in Congress fighting sexual assault in the military, advocating an end to the exclusion of openly gay Americans in the military, and winning health care benefits for the 9/11 first responders as evidence that she has the backbone ― or “bravery” ― needed to reunite the country behind a vision of inclusivity and greater economic opportunity.

“I will go toe-to-toe with anyone to do the right thing. Whether it’s powerful institutions, the president, or even my own party,” Gillibrand declared.

“I’m fighting for an America where power truly belongs in the hands of the people ― where our leaders care about everyone in this country, and lead not from weakness of ego, but from strength of character; where compassion and integrity define our government, not self-interest and corruption; where we just don’t care about the profits we make today, but the future we’re leaving to our grandchildren,” she added.

Gillibrand’s formal announcement was an attempt at something of a reboot more than two months after she rolled out an “exploratory committee” for her White House run.

After eliciting some positive attention for her mid-January announcement and subsequent Iowa campaign swing, Gillibrand has struggled to break through in the press and the polls.

The junior senator from New York lacks the name recognition of colleagues like Sen. Kamala Harris (D-Calif.); the devoted ideological base of Sen. Bernie Sanders (I-Vt.); or even the youthful novelty of South Bend, Indiana, Mayor Pete Buttigieg (D).

In a Des Moines Register poll of over 400 Iowa Democrats conducted earlier this month, not a single respondent listed Gillibrand as their first choice. (Former Vice President Joe Biden, who has yet to announce his plans to run, led in the poll, followed by Sanders.)

Gillibrand’s televised town hall on MSNBC last Monday evening provided another demonstration of the challenges she has faced in carving a niche for herself in the crowded Democratic presidential field. It was a relatively rare moment of unfiltered national television exposure for Gillibrand, and she used it to unveil a new proposal to provide free college for Americans who volunteer for some form of national service.

But Sen. Elizabeth Warren (D-Mass.), who held a live CNN town hall the same night, dominated the news cycle with her call to abolish the Electoral College.

And unlike Sanders, Warren, Harris and neighboring Sen. Cory Booker (D-N.J.), it took Gillibrand two months to pick up an endorsement from a prominent elected official in her home state. Rep. Carolyn Maloney (D-N.Y.) announced last Sunday that she was backing Gillibrand’s presidential bid. However, neither Maloney nor any other elected officials spoke at Gillibrand’s Manhattan rally.

We can’t afford not to do this. We don’t have time to waste. Sen. Kirsten Gillibrand (D-N.Y.)

In addition, Gillibrand is under scrutiny for her Senate office’s decision to discipline, rather than fire, a male employee accused by a female subordinate of unwanted sexual advances. The subordinate subsequently resigned in protest over what she perceived as an inadequate response to her allegation, Politico reported earlier this month.

The allegation runs counter to Gillibrand’s reputation as a crusader for the rights of sexual assault and harassment survivors. She has received both praise and criticism for becoming the first senator to call for Sen. Al Franken (D-Minn.) to resign in December 2017 after women lodged multiple allegations against him of unwanted groping.

In a bid to turn the page on a rocky start to her run, Gillibrand emphasized her potentially eclectic appeal on Sunday, portraying herself as a working mother and women’s rights champion; a principled progressive with an unyielding record against Trump; and an upstate New Yorker with success in Republican areas. She occupies something of an ideological middle ground between Sanders and Warren on the left, and figures like Biden and Sen. Amy Klobuchar (D-Minn.), who are more explicitly trying to appeal to moderate Democrats and independents less comfortable with the party’s leftward turn.

On the one hand, Gillibrand is keen to emphasize that her 2006 win in a heavily Republican House district in upstate New York equips her uniquely to appeal to rural Americans. It’s a pitch Gillibrand wielded frequently in her first campaign trip to Iowa in January ― a state she has since visited two more times ― and she invoked it again on Sunday.

“People told me: ‘It has more cows than Democrats ― you can’t possibly win!’” she recalled. “But, I took those odds, and I won.”

At the same time, Gillibrand has adopted a steadily growing list of progressive policies since she was tapped to fill Hillary Clinton’s Senate seat in 2009.

Early on in her Senate tenure, Gillibrand shed her past opposition to gun control and support for hard-line immigration enforcement policies. More recently, she has championed legislation that would provide 12 weeks of paid family leave, and a bill to transform the postal service into a nonprofit bank that could effectively replace the exploitative payday lending industry.

She even claimed she’d “go further” than some Green New Deal proponents by coupling it with a carbon tax.

“We can’t afford not to do this. We don’t have time to waste,” Gillibrand said on Sunday.

Gillibrand has nonetheless stopped short of her most left-wing colleagues. She has not endorsed tuition-free public college for all Americans. And she consistently describes a Medicare buy-in, rather than an immediate switch to single-payer health care, as her preferred method for achieving universal coverage.

Beatrice Sevcik, 47, and her husband Tony Gibney, 48, came in from the Westchester County suburbs to hear Gillibrand speak.

“I think it’s time that we had a woman running the country,” said Sevcik, a retired attorney. “I think she has a broad appeal. We need someone who can appeal to the suburban and rural populations, and I think that makes a difference.”

“I love Kamala Harris, but I don’t know if a progressive from San Francisco can win the middle,” she added.

Other rally attendees said they came to hear Gillibrand’s pitch, but had yet to decide on Gillibrand or any other candidate. Several said that while nominating a woman was not essential, it factored into their interest in Gillibrand.

Nicole McCloskey, a 30-year-old finance professional from Manhattan, said she was “still shopping” for the right candidate. McCloskey, who likes Gillibrand’s support for paid family leave, said she was attending the rally because, “[Gillibrand]’s my senator and I want to support other women running for office.”

Andrew Sapon, 62, a Manhattan attorney, joked that he was waiting for another “15, 20 Dems to announce.”

But he was impressed with Gillibrand’s work in the Senate on behalf of sexual assault survivors in the military. It would be nice, he suggested, to “replace one New Yorker with another in the White House.”

New York University students Daniel Cueto, 22, and Joseph Blakely, 21, are leaning toward Sanders or Warren, but they wanted to give Gillibrand a chance as well.

Blakely was skeptical of Gillibrand’s shift to the left.

“A lot of [her] material for this election seems kind of forced in a way, but I don’t follow it enough to say whether it’s authentic,” he said.