In Germany, Solar-Powered Homes Are Really Catching On 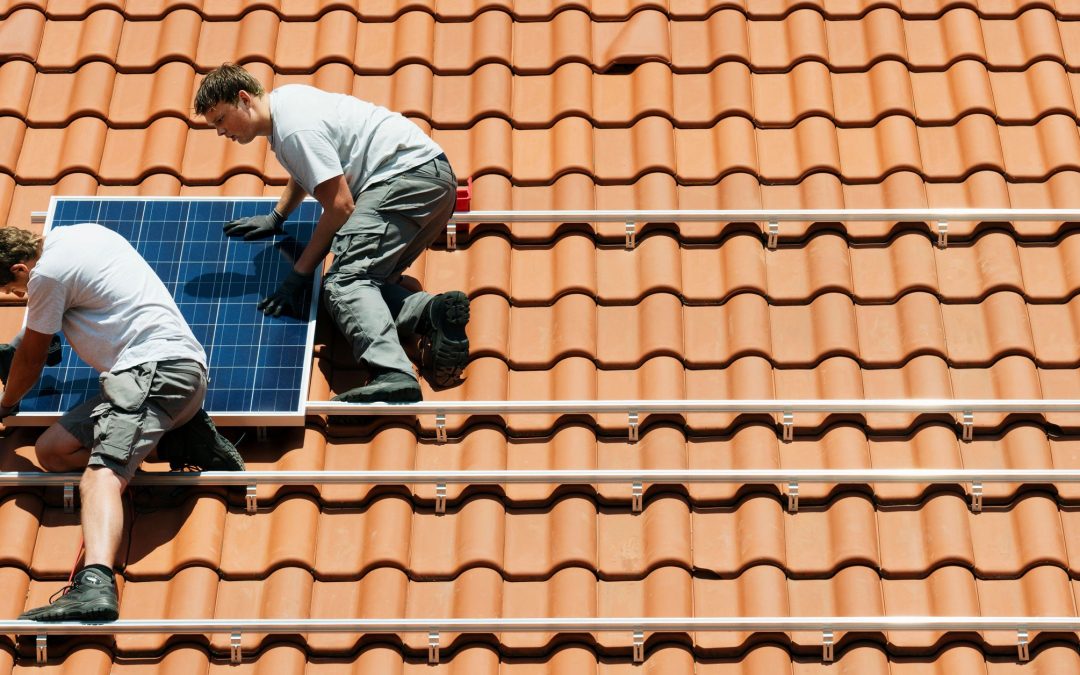 This story was originally published by Yale Environment 360 and is reproduced here as part of the Climate Desk collaboration.

Stefan Paris is a 55-year-old radiologist living in Berlin’s outer suburbs. He, his partner, and their three-year-old daughter share a snug, two-story house with a pool. The Parises, who are expecting a second child, are neither wealthy nor environmental firebrands. Yet the couple opted to spend $36,000 for a home solar system consisting of 26 solar panels, freshly installed on the roof this month, and a smart battery—about the size of a small refrigerator—parked in the cellar.

On sunny days, the photovoltaic panels supply all of the Paris household’s electricity needs and charge their hybrid car’s electric battery too. Once these basics are covered, the rooftop-generated power feeds into the stationary battery until it’s full—primed for nighttime energy demand and cloudy days. Then, when the battery is topped off, the unit’s digital control system automatically redirects any excess energy into Berlin’s power grid, for which the Parises will be compensated by the local grid operator.

“They convinced me it would pay off in 10 years,” explains Paris, referring to Enerix, a Bavaria-based retailer offering solar systems and installation services. “After that, most of our electricity won’t cost us anything.” The investment, he says, is a hedge against rising energy costs. Moreover, the unit’s smart software enables the Parises to monitor the production, consumption, and storage of electricity, as well as track in real time the feed-in of power to the grid.

The Parises are one of more than 120,000 German households and small-business owners—and an estimated 1 million people worldwide—who have dug deep into their pockets to invest in solar units with battery storage since lower-cost systems appeared on the market five years ago. “No one expected this kind of growth, so fast,” says Kai-Philipp Kairies, an expert on power generation and storage systems at the RWTH Aachen University in western Germany.

Today, one out of every two orders for rooftop solar panels in Germany is sold with a battery storage system. The home furnishing company Ikea even offers installed solar packages that include storage capacity. Battery prices have plummeted so dramatically that Germany’s development bank has now scratched the battery rebates—covering about 30 percent of the cost—that it offered from 2013 to 2018.

To be sure, 120,000 households and small businesses represent only a tiny fraction of Germany’s 81 million people. But analysts say this recent growth demonstrates the strong appeal of a green vision for the future: a solar array on every roof, an electric vehicle in every garage, and a battery in every basement. Analysts see the embrace of home batteries as an important step toward a future in which low-carbon economies rely on increasingly decentralized and fluctuating renewable energy supplies. To date, electricity storage has lagged far behind advances in solar power, but as batteries become cheaper and more powerful, they will increasingly store the uneven output of wind and solar power, contributing to the kind of flexibility that a weather-dependent source will require.

The budding popularity of solar panel and battery systems, driven by a drop in lithium-ion battery prices, has thrown a lifeline to Germany’s moribund solar sector, which has been reeling in recent years, in part because of low-cost production of solar panels in China. The progressive decline of feed-in tariffs—guaranteed remuneration for consumers supplying energy to the grid—also led to a sharp drop in solar energy deployment.

But against all odds, companies like Enerix, Sonnen, and Solarwatt have gotten back on their feet thanks to home energy storage systems. In 2012, Enerix had to shut down eight of its 15 affiliates in Germany and Austria. But since the battery boom, it has been reopening old shops and starting new ones, today boasting 54 outlets that sell panels, batteries, and energy optimization systems. Germany now has some 44 manufacturers of home energy storage systems. Germans have installed solar-panel arrays on more than 1 million buildings, but most of them lacked storage units. Now, a growing number of those homeowners are buying batteries. German electricity storage units also are being sold in France, Great Britain, Italy, the Netherlands, and Spain, as well as Australia and South Korea.

The price tag of a home storage system depends on the size of the house or business, the owner’s energy needs, the building’s access to sun, and the quality of the panels, batteries, and management systems. For a small house with just 20 panels, one can expect to pay about $8,000 to $11,000 for the PV array and roughly the same amount for the battery and DC/AC power inverter. The largest home batteries go for around $34,000. And for an extra $500, advanced devices connect the system to household appliances and optimize energy use, as well as regulating feed-in to the grid. With such top-of-the-line technology and lots of sunlight, an owner might save as much as 80 percent on electricity bills, according to Solarwatt, a Dresden-based outfit manufacturing smart tech.

But the economics of battery storage aren’t the only, or even the main, motivation of most battery system buyers, says Matthias Schulnick of Enerix Berlin. “More and more people want to be independent of the power companies and rising prices,” he says. “And they want a green footprint, to do something for the future.”

In Germany, in just a few short years, home storage units morphed from a quirky niche product for tech nerds and Green Party voters to one with enormous mainstream potential. The consulting firm McKinsey predicts that the cost of energy storage systems will fall 50 to 70 percent globally by 2025 “as a result of design advances, economies of scale, and streamlined processes.”

Signs of the explosion in interest are everywhere: Earlier this month, the British-Dutch oil company Royal Dutch Shell purchased Sonnen, Germany’s leading maker of home batteries. The German utility giant E.ON is a step ahead of Shell, having teamed up with Solarwatt in 2016 to sell combined solar-and-battery units.

The Energy Storage Association, a U.S.-based trade group, projects that energy storage capacity will soar eight-fold from 2015 to 2020, becoming a $2.5 billion market. Bloomberg New Energy Finance projects that within 20 years the global energy storage market, of which home storage is just one part, will have attracted $620 billion in investment.

In California, as of 2020 all newly constructed residential buildings must be outfitted with solar panels. The owners of these buildings will surely be giving battery systems a hard look as prices fall. Adding home batteries becomes especially attractive for consumers who own electric vehicles.

The downside of the battery bonus, explains Kairies, is that “under today’s conditions it takes about a decade to pay off the battery from savings on energy bills. But most of the life spans of these batteries today aren’t much more than 10 years, at most 15 years. Then you have to buy a new one.”

The boom-in-progress is in large part a consequence of spectacular advances in the performance of lithium-ion batteries—the standard type of battery found in most electric vehicles and cell phones. In laboratory conditions, technicians—who were working on improving electric vehicle batteries, not home storage units—increased the lithium-ion battery’s density by tweaking the conductors and the chemicals, which doubled storage capacity. This sent the price of storage, measured per watt hour, plummeting by half. Solar panels, too, are cheaper than ever before, although their decades-long price decline has leveled off.

Experts differ widely on the future of battery-based storage technologies and the implications for decentralized energy generation. Some, like Julia Poliscanova of the Brussels-based watchdog group Transport and Environment, argue that lithium-ion will remain the go-to battery type for the foreseeable future. The emergence of recycled EV batteries, which have too little capacity for cars but enough for household needs, would drive down costs even farther while giving lithium-ion batteries second and third lives, she says.

Others, like Stefano Passerini, director of the Helmholtz Institute in Ulm, a battery research center in Germany, says the next generation of small-scale storage will be sodium-ion batteries, which, unlike lithium batteries, don’t require cobalt, a mined chemical element that is ever-harder to find. “Since home batteries can be larger than EV batteries, we should conserve the cobalt that’s available for cars, and go a different way with home storage,” he says. The clean-energy pioneer EWS Schönau is developing environmentally friendly batteries, such as largely recyclable saltwater batteries that contain neither carcinogenic heavy metals nor scarce minerals.

Regardless of the type of battery, home energy storage units can help smooth out fluctuations in electricity production, a function known as “balancing.” When the grid is flush with power, for example, grid operators can pay battery owners—even ones with no solar array attached to them—to store the excess for them. When the grid needs power, home and car batteries can feed energy into the grid. Experts say balancing is critical to the larger project of a low-carbon world.

But this scenario is still largely in the future. “What we have now [in home storage] certainly helps,” says Passerini, “But it’s still very little.” He says the next step is enabling home energy producers to sell to neighbors and tenants, a service known as peer-to-peer electricity trading. This would allow consumers without access to home-generated power to take advantage of the clean energy of those who produce more than they need.

Volker Quaschning, a professor of renewable energy systems at the University of Applied Sciences in Berlin, put the scale of the challenge in perspective: “We have over 100,000 home-generation and storage systems [in Germany], but to hit the Paris goals we need 10 million in Germany alone. There’s huge potential, but it has to be cheaper and easier.” He says that requires eliminating energy-consumption taxes on households and businesses that generate electricity for their own use and maintaining solar energy’s guaranteed tariffs, which encourage investment.

“Home storage can be expanded the same way we did solar power,” adds Quaschning, referring to investment and production incentives, “which eventually created economies of scale and brought prices way down.”

It worked once, he says, and it can work again.