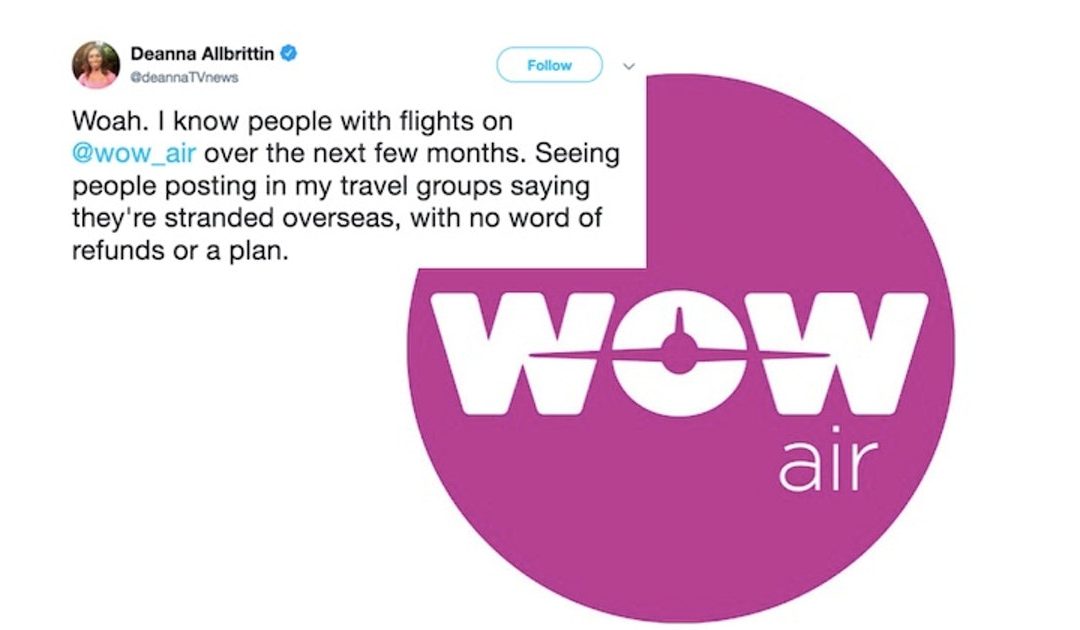 The discount Icelandic airline that you know and love abruptly shut down on March 28, leaving travelers stranded across the globe. These tweets about WOW AIR shutting down and canceling flights are alarming, to say the least. Some people are tweeting about friends being stranded overseas, while others are chatting about refunds. In all, people seem concerned about the shutdown. Elite Daily reached out to WOW AIR for comment on the company ceasing operation, but did not hear back by the time of publication.

Early on Thursday, the airline posted an official announcement on its website about discontinuing its services. According to the WOW AIR announcement, the company “has ceased operation” and canceled all future flights. Beneath the shocking news, the company gives details about how passengers can reach their destination moving forward. It also discusses how customers can get refunds on their tickets (if they’re eligible to do so).

The company is encouraging passengers with cancelled flights to check other airlines for discounted fares (aka “rescue fares”). As far as refunds go, the process seems tricky. According to WOW AIR, customers who bought their plane tickets with a credit card should check with their company to see if they’ll get a refund. Anyone who purchased their flights in a package through a European travel agent is reportedly protected by the Package Travel Directive, but they should touch base with the agent that helped them. Finally, anyone who has travel protection on their tickets might be entitled to compensation. For more information, click here.

Refund or not, Twitter seems totally shook about the abrupt news.

As you can see, some people are pretty upset about the shutdown, while others are concerned about getting a refund. Some folks, on the other hand, are bummed out about the discount airline ceasing operation. In case you’re unaware, WOW AIR was a hub for cheap international flights — and it was widely known for its affordable trips to Iceland. In fact, the company hosted ticket specials pretty frequently, such as this Valentine’s Day deal and this President’s Day flight sale. The discounted tickets that WOW AIR boasted were often as low as $45 for a one-way trip, so it’s definitely a shame to watch the company shut down.

Now, travelers will need to seek cheap flights elsewhere. That shouldn’t be too much of a problem, since tons of airlines offer sales from time to time. Just take Southwest’s latest flight sale for March into consideration. The sale, which ends on March 28, offers a ton of cheap flights that’ll make for a great vacay. Other companies, such as JetBlue and Alaska Airlines, offer flash sales pretty often, too, so keep an eye out.

If you’re someone who’s stranded on WOW AIR’s account, you’re probably not thinking about vacations right now (and I don’t blame you). Instead, you can stay up to date on the shutdown by going online and visiting WOW AIR, the Icelandic Transport Authority, or the Keflavik Airport.