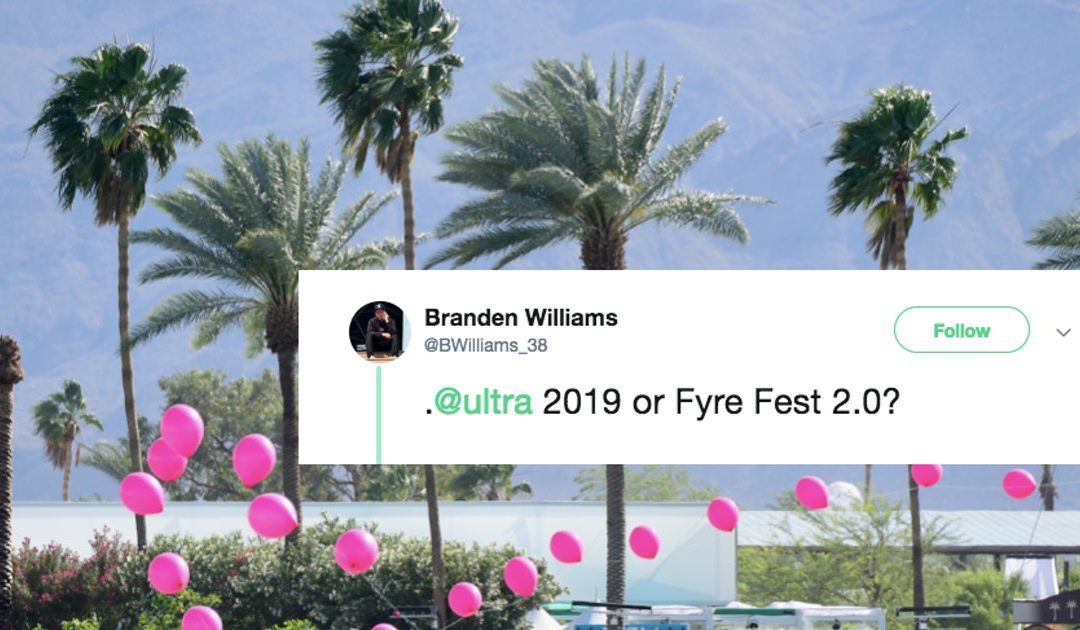 Welp, get ready for another potential “music festival mishap” documentary, folks. A music festival in Florida apparently hasn’t gotten off to a great start with reported various parking, travel, and access issues. To make matters worse, Miami’s Ultra Music Festival is being compared to Fyre Festival thanks to the reported transportation issues on day one. Elite Daily reached out to Miami Ultra Music Festival for comment on the reports, but did not hear back at the time of publication.

The Ultra Music Festival, an electronic music festival featuring headliners like Deadmau5, Odesza, and Alesso, which began on Friday, March 29, started at Miami Marine Stadium in Virginia Key after being forced to relocate from downtown Miami, per . This is where the reported issues began as festival-goers started leaving the event on late Friday evening and into the early hours of Saturday morning.

Miami Marine Stadium, which is on an island off the Miami coast, has no parking on-site, and, per , both Uber and Lyft announced that they would not be picking up people from the festival to minimize traffic. According to Ultra Music Festival’s website, the organizers ensured guests that there would be shuttles off the island. From the looks of Twitter on Friday night, thousands of people were reportedly left without transportation when shuttles failed to show up at night. Ultra Music Festival did not respond to Elite Daily’s request for comment on the reported bus issues.

One festival go-er posted a video on Twitter apparently showing countless people waiting for a bus and wrote:

2+ hrs of waiting for buses to pass by us either full or empty. I might not come back the second day even though i already paid for the ticket. Nobody on charge no barriers no nothing. Wow for my first #Ultra not looking at going next year.

Needless to say, people were quick to make comparisons to the infamous Fyre Festival — the brainchild of Billy McFarland, who is currently serving a six-year prison sentence after pleading guilty to two counts of fraud — that took place in 2017, where festival-goers did not get what was advertised. Remember that iconic photo of the cheese sandwich? Pretty much nothing was as advertised when people arrived in the Bahamas, and in January 2019, both Netflix and Hulu aired documentaries detailing all that went wrong. With the echoes of Ja Rule’s tweet ringing in their ears, Ultra festival-goers couldn’t help but compare the two.

Another person, who compared the event to “Fyre Fest 2.0,” tweeted, “Only one way off this island at 2am w/ zero transportation. 80k+ people stranded. #Ultra2019.”

After an extended period of time with no reliable transportation, people reportedly started walking across the three-mile bridge, blocking traffic to get back to the mainland. Twitter user @Tidoublemy8 posted a video of the “end of the world”-esque migration of frustrated young people.

In case you didn’t think things could get any worse, a fire reportedly broke out near the main stage, per EDM.com. Elite Daily reached out to Ultra Music Festival for comment on the reports of a fire and if anyone was injured by the apparent blaze, but did not hear back at the time of publication.

Joey Flechas, a reporter for , live-tweeted his festival journey, including the apparent transportation mishaps in the evening. In one tweet, he wrote, “I’ve seen some tempers flare here. People confused above which bus to get on. Just talked to Shadey Gramajo, who said she waited an hour and a half in the wrong line and was sent to another line.” Ultra did not respond to Elite Daily’s request for comment on the reported transportation issues.

Despite all the setbacks at the end of the evening, some people were still defending Ultra, saying it was nothing like Fyre. Twitter user @TitoR10 noted that “Fyre festival didn’t even have a lineup,” which Ultra did. Twitter user @x_bassbabe echoed the sentiment, writing, “Comparing Ultra to Fyre Festival is a bit of a stretch. Y’all weren’t stranded on an island and you still got to see DJs all day.”

Fyre Festival 2.0 or not, it looks like Ultra has gotten off to a rocky start. Hopefully the reported transportation issues can be solved in time for day two and three — you’ll just have to stay tuned and see.