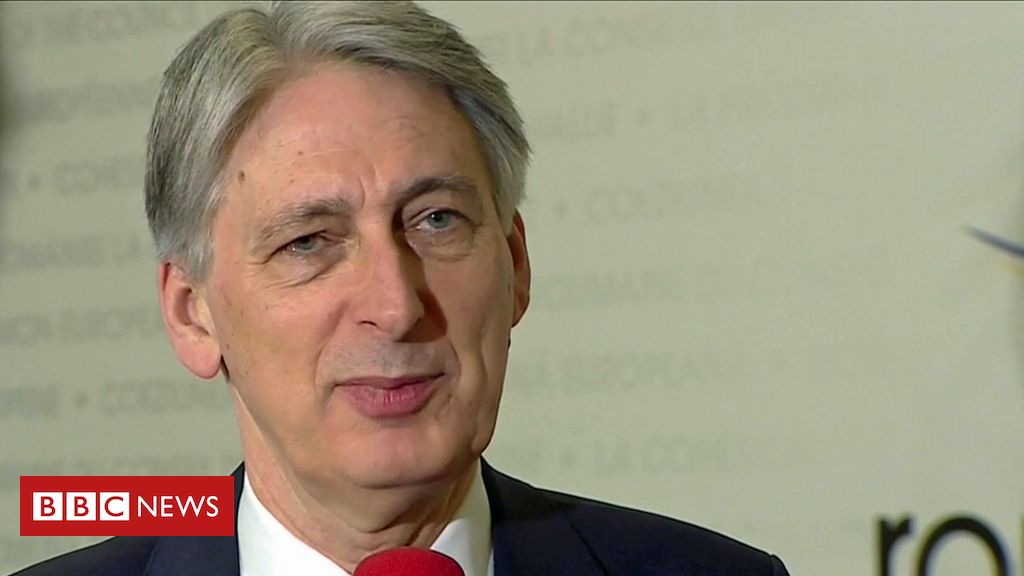 Chancellor Philip Hammond has said he is “optimistic” Brexit discussions between the government and Labour can reach “some form of agreement”.

Mr Hammond said there were “no red lines” in the meetings.

But Labour leader Jeremy Corbyn said he was “waiting to see the red lines move” and had not “noticed any great change in the government’s position”.

Three days of talks ended on Friday without agreement and Labour said no more talks were planned this weekend.

Downing Street responded by saying it was prepared to pursue alterations to the deal and ready to hold further discussions with Labour over the weekend.

The talks have been taking place to try to find a proposal to put to MPs which could break the Brexit deadlock in the Commons before an emergency EU summit on Wednesday.

Speaking ahead of an EU finance ministers’ meeting in Bucharest, Mr Hammond told reporters: “We are expecting to exchange some more text with the Labour Party today, so this is an ongoing process.”

Mr Hammond said: “We should complete the process in Parliament… Some people in the Labour Party are making other suggestions to us. Of course, we have to be prepared to discuss them.

“Our approach to these discussions with Labour is we have no red lines. We will go into these talks with an open mind and discuss everything with them in a constructive fashion.”

Speaking while campaigning for next month’s local elections in Plymouth, Mr Corbyn suggested votes in Parliament were now the most likely way of providing a breakthrough on Brexit, saying his key priority was “to avoid crashing out of the EU with no deal”.

Mr Corbyn told the BBC: “We have a party position on the future relationship with Europe… and we will responsibly discharge those duties, but we are determined to make sure there is no crashing out.”

The prime minister has been unable to get Parliamentary backing for the withdrawal agreement she secured with the EU in November last year, which sets out the terms of the UK’s departure.

Labour has said it wants fundamental changes to a document drawn up at the same time, known as the political declaration. It sets out ambitions for the future relationship between the UK and EU after Brexit – including on trade, regulations, security and fishing rights – but does not legally commit either party.

Shadow home secretary Ms Abbott told BBC Radio 4’s Today programme that Labour had engaged in the talks “in good faith” and shadow Brexit minister Sir Keir Starmer had written to the government to say he wants them to continue.

She said there was concern that the government has made “no movement” on alter the political declaration and “that is key”.

A Downing Street spokesman said after Friday’s talks that “serious proposals” were made and it was “prepared to pursue changes to the political declaration in order to deliver a deal that is acceptable to both sides”.

BBC political editor Laura Kuenssberg says there was a sense that the government has “only offered clarifications on what might be possible from the existing documents, rather than adjusting any of their actual proposals”.

She added that both sides agreed the talks are not yet over, but there were no firm commitments for when further discussions might take place.

The UK is due to leave the EU on 12 April and, as yet, no withdrawal deal has been approved by the House of Commons.

Prime Minister Theresa May has written to European Council President Donald Tusk to request an extension to the Brexit process until 30 June but says if MPs agree a deal, the UK should be able to leave before European parliamentary elections are held on 23 May.

She says the UK would prepare to field candidates in May’s European Parliament elections if MPs failed to back a deal.

But education minister Nadhim Zahawi told the Today programme it would be “a suicide note of the Conservative Party if we had to fight the European elections”.

He added the elections would pose an “existential threat” to both the Conservatives and Labour if they “haven’t been able to deliver Brexit”.

Mr Zahawi suggested that if an agreement could not be found from the talks with Labour, MPs should be asked to find a compromise on a deal through a preferential voting system.

Any extension to the UK’s departure would have to be unanimously approved by EU leaders.

Your guide to Brexit jargon

A senior EU source told BBC Europe editor Katya Adler that Donald Tusk would propose a 12-month “flexible” extension, with the option of the UK leaving sooner once Parliament had ratified a deal.

French Europe minister Amelie de Montchalin said such a delay would require the UK to put forward a proposal with “clear and credible political backing”.

“In the absence of such a plan, we would have to acknowledge that the UK chose to leave the EU in a disorderly manner,” she added.

Irish Prime Minister Leo Varadkar told RTE it was unlikely that a UK request for a delay would be vetoed by any EU member nations as it could cause economic hardship in the bloc and “they wouldn’t be forgiven for it”.

But he said there was growing frustration from some nations which see Brexit as distracting from other things.