Game Of Thrones: 5 Things The Show Did BETTER Than The Books! – Perez Hilton 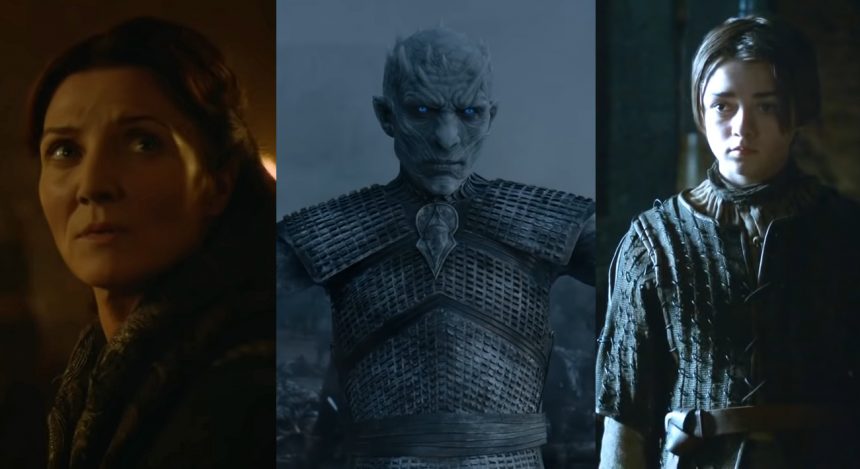 We know, we know, it’s blasphemy to say the Game of Thrones TV show is better than the books. But hear us out!

The two are VERY different experiences, and BOTH are a must for any fan.

We’re just saying that while many things are done masterfully in the books, some of it is actually improved upon in the show!

[Note: we are NOT including the show’s absolutely brilliant costumes and music as that would be an unfair comparison for a book and is a given in the show’s favor.]

Season Five brought misery and despair and heartache. But it also brought Hardhome.

The titular battle of the episode comes when Jon Snow (Kit Harington) and Tormund (Kristofer Hivju) travel to where the bulk of the wildlings have gathered to bring them south of the Wall on ships before they can be massacred by the White Walkers.

Unfortunately they’re just a tiny bit late — the White Walkers arrive during the evacuation and attack. What follows is possibly the most tense 20 minutes ever put on TV.

Jon and a few wildling warriors fend off the army of the dead while the boats are filled one last time. In single combat with a White Walker, Jon is almost killed — until he learns his Valyrian steel sword is one of the only things that can kill the icy generals.

Even still, he and (some of) his allies barely get away with their lives… and are forced to watch from the boat as the Night King raises all their own dead as soldiers in his army.

The battle is a crucial point in the show as it perfectly represents the stakes of the war to come. If the living don’t come together and defeat the White Walkers in the next big confrontation, every single person in the world will die.

The moment the Night King raises the fallen is a turning point for the viewers and for Jon; he knows, with no question, this is the battle that matters. Every decision he makes going forward is with this sight in mind.

It’s an action-packed sequence, but it’s treated almost more like a horror movie. Thrilling but utterly spine-tingling. But what makes it so much better than when it happens in the books?

Well, that’s the thing… it kind of happens in the books?

There is a massacre at Hardhome, but we never see it. The entire thing takes place out of the sight of any of our POV characters.

Yep — Jon isn’t even there.

He hears about it in letters, and Melisandre has a very expressionistic vision of it, but it’s all in the background.

Not only do readers not get this splash of ice water to warn us what’s to come, Jon doesn’t see it!

In the books, when Arya hides out at Harrenhal under a fake name, she eventually becomes the cupbearer for… Roose Bolton.

Yep. The very man who is about to betray her brother.

Bolton still ends up in Harrenhal in the show, that’s not until Season Three — well after Arya has left.

Instead the man who comes in and takes over the ruined castle is Tywin Lannister.

And it was the right call, no question!

Arya still overhears things she shouldn’t, trying to suss out battle plans while making sure not to give away her identity.

But in the show the interaction takes on a whole new life.

After the death of Ned Stark, the tween tomboy finds a series of replacement father figures, including Yoren, The Hound, and Jaqen H’Ghar.

And in a series of scenes through the back half of Season Two, Arya has a relationship with the most unlikely patriarch. Tywin is the father/grandfather/boss of just about everyone on her kill list, but the two develop a real affection despite all that.

Tywin gives Arya a sense of pride by recognizing her intelligence and potential; and she knows how sincere it is because it’s always teetering on suspicion of her station.

In Arya, Tywin finds the foil he lacks making battle plans all day with uneducated Lannister generals, all either dullards in their positions due to nepotism or brutish beasts elevated by their talent for killing.

The two have spirited sparring sessions, sweetened by compliments and peppered with veiled threats — and you can see in their eyes they both love it.

They are as much an odd couple on screen as on paper, and every scene between them just plain works.

BRIENNE VS THE HOUND

Remember that amazing scene at the beginning of Season Four when Arya (Maisie Williams) goes after her sword and The Hound (Rory McCann) has to follow — then proceeds to trash talk the Lannister men before they both clean house?

In the books, Sandor Clegane is injured in that fight, and it’s his wounds getting infected that leave lying on the ground begging for mercy as Arya leaves him for dead.

By having him fight Brienne of Tarth (Gwendoline Christie) in a no holds barred, brutal brawl for Arya.

It’s probably the best, most evenly matched duel in the entire show. It comes down to a bloody slugfest, and every moment is made so much more breathtaking by the fact at this point, most audience members love BOTH characters.

Not only is it a better way to send Sandor on his way — getting defeated by maybe the best fighter on the show — but it also gives Brienne a big moment she’s missing in the books.

Sure, she wipes the floor with some random soldiers, as she does on the show, but getting that one epic duel — brilliant.

OK, this one requires WAY too much explanation of an incredibly convoluted plot in the books.

We’ll just say this as a word of warning: if your head is spinning at the end of all this, we think you can agree the simple story of Gilly on the show is much better.

OK, so on the show and in the books, Gilly is one of Craster’s daughters AND wives, who runs away with Sam after giving birth to a son — which Craster would have given to the White Walkers.

It’s a dark, twisted backstory, but it gets worse for her in the books.

It all starts with Mance Rayder, the King Beyond The Wall. This guy:

See, the wildling leader also has a pregnant wife. She dies in childbirth, but her baby is alive and healthy — so Gilly ends up caring for it when Mance gets burned at the stake.

And when Jon sends Gilly with Sam, it isn’t to keep her safe. He sends her with Mance’s baby to protect it from Melisandre — who is eager to get her hands on anyone with “king’s blood.”

The problem is, he orders her to take Mance’s baby and leave her own.

So he’s protecting a baby from being burned alive by the Red Woman by… replacing it with another baby. How is that supposed to help?

It’s one of the dumbest, most inscrutable decision Jon ever makes, and frankly indicative of a lot of convoluted goings on in that area of the books. (Mance also turns out to have been switched with another wildling who was burned in his place. It’s… a lot.)

The upshot is, Gilly is forced — by our hero — to leave her own baby to be burned alive or, at best, abandoned. So her entire story just continues to be tragic as she basically cries her way through an entire book.

Why is this so much better on the show? Besides the simplicity, it’s about balance.

On the show Gilly remains one of few unassailably positive characters despite the tribulations she’s faced. Her relationship with Sam is just consistently adorable.

In a world which can be so cruel and unforgiving, she is one of the rare spots of brightness. No, not everything should be sweet, but spending time with people who are is a necessary respite from the awful realities of this gritty world.

In the books… just another drop in a relentlessly dour bucket.

The centerpiece shocker from A Storm Of Swords occurs after Catelyn Stark and her eldest son Robb Stark have already been offered bread and salt by Walder Frey.

They’ve been given guest rights and are lulled into a sense of safety during Cat’s brother Edmure’s wedding — and then they’re slaughtered like sheep out of nowhere.

It’s absolutely the most brutal scene in both the books and the show.

Usually on the show we’re given a better look at what’s happening overall but missing that extra emotional impact of being inside the POV character’s mind.

But frankly Michelle Fairley‘s peerless performance brought us RIGHT in.

We felt every moment of her agony as she begged Robb to get up and away. The only thing we missed out on was Catelyn’s description of the feeling of the knife slicing her throat — but the real impact was the knife in all our hearts, wasn’t it? And on TV the knife was twisted just a little deeper…

In the books Robb is not a POV character. We get all our scenes with him through the eyes of Bran or Catelyn. We get news of his military exploits secondhand as Cersei or someone hears about it.

We barely even MEET Robb’s wife in the books. We know what happens.

Robb meets a girl named Jeyne Westerling who nurses him after he gets wounded in a battle, they end up sleeping together and getting married — destroying his alliance with the Freys, which was based on a promised future marriage. She’s a Westerosi girl, not a foreigner, and her personality is… forgettable at best. Like we said, we barely meet her. There are like a thousand characters in this saga.

What you need to know is this… Jeyne’s parents are always around scheming and likely pushed her into getting close to Robb to help their position.

Talisa is different. When we meet Talisa she isn’t trying to get close to the King in the North, she’s criticizing him for warmongering. It’s basically a rom com meet-cute.

We get to see Robb become intrigued with this capable, complex woman — as she is impressed by his compassion and virtue. We get to watch them fall in love.

The audience may still think Robb is an idiot for breaking his vow to Frey, but they UNDERSTAND. Because he and Talisa are so good together. Their relationship is playful but full of mutual respect. It’s sexy but sweet.

And when she tells him she’s pregnant, it’s a beautiful and moving moment.

In the books, Jeyne isn’t just absent figuratively, she’s absent from the event PHYSICALLY. That’s right; she isn’t even AT the wedding. She stays in Riverrun so as not to further insult Walder Frey. She and her family stay safe. (Her parents may or may not have known what was going to happen; like we said, they’re schemers.)

But Talisa… Talisa doesn’t just attend the wedding, she is the first casualty.

Walder Frey’s first nod is to his son, who stabs Talisa in the belly, killing Robb’s wife and his unborn child before the first crossbow is fired.

Watching from Cat’s eyes as Robb is murdered was devastating. Seeing Talisa and “Little Ned” snuffed out through Robb’s eyes? It doubled down on the tragedy.

Showrunners David Benioff and D.B. Weiss said for months it was the moment they’d been thinking about putting on film since they first pitched the adaptation — and it really shows.

The moment was so successfully done, a few posted reaction videos — likely by book readers who knew roughly what their loved ones were about to go through — went viral, leading to what has become its own cottage industry of Game Of Thrones reactions on YouTube!