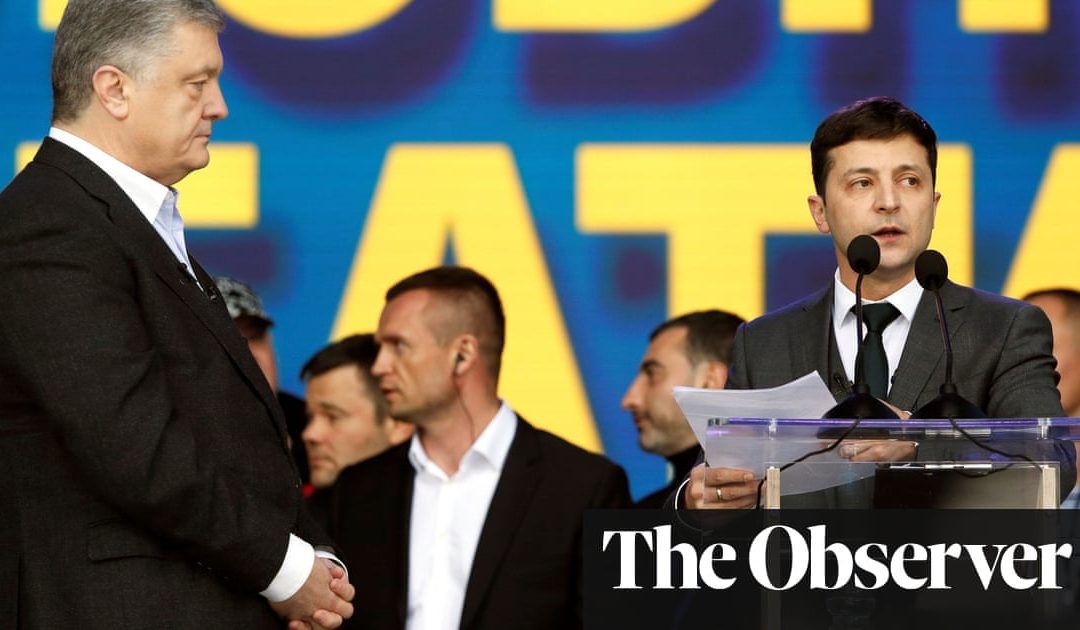 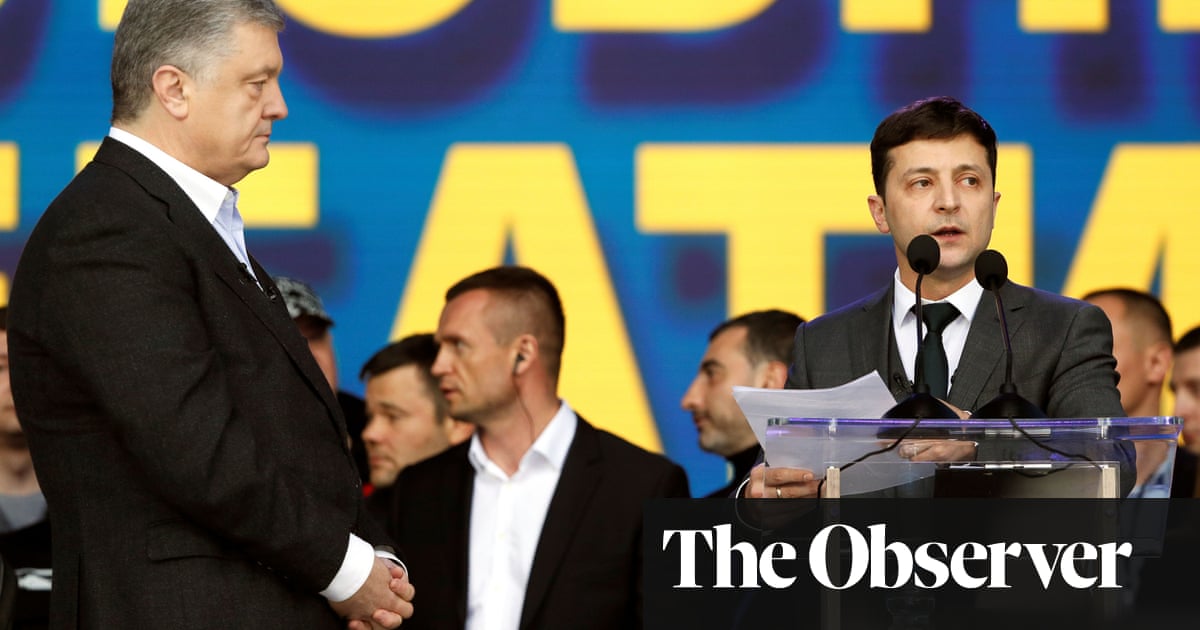 Theres a 90% chance hell be a disaster, but Im going to vote for him anyway, said Alyona Sych, a 36-year-old nurse, strolling through Kyiv in the spring sunshine and explaining why she plans to vote for an untested actor and comedian in Ukraines presidential election. I know 100% that the current guy is a disaster, so of course Ill go for the 10% chance we could really change things.

For three seasons of the popular Ukrainian television show Servant of the People, Volodymyr Zelenskiy has played a frustrated everyman teacher, implausibly propelled to the countrys presidency. Now hes standing for the job for real, and most polls give him a commanding lead over the incumbent, Petro Poroshenko. By Sunday evening, Zelenskiy could have secured a fourth season as president, but his first one in real life.

The fresh-faced, 41-year-old is the latest iteration of a global phenomenon of outsiders challenging the mainstream. However, unlike populist insurgents in other countries, Zelenskiy has come out on top without really making any promises or policy suggestions. He has eschewed standard campaigning in favour of quirky Instagram videos and standup comedy gigs, and he doesnt even have many dedicated supporters. Most, like Sych, say they are voting for him as a gamble that he cannot be any worse than the status quo.

At Fridays unorthodox debate between Zelenskiy and Poroshenko, held inside Kyivs Olympic Stadium at Zelenskiys insistence, the shallowness of real support for him was visible: while Poroshenko filled out his section, Zelenskiy was cheered on by a meagre contingent of fans. It was another sign that if he wins, it will be a triumph not of dedicated Zelenskiy backers, but of an anti-Poroshenko, anti-establishment vote, fixing on to Zelenskiy as the default alternative.

Im not your opponent, Im a verdict on you. I am the result of your mistakes, Zelenskiy told Poroshenko on the stage, reinforcing the point.

Poroshenko has said that while Zelenskiys showmanship might make for good entertainment, it would be suicidal for a country at war. He came to power in 2014, burdened with the enormous expectations that followed the Maidan revolution to clean up a country dominated by oligarchy and corruption.

Then, he promised to help Ukrainians live in a new way, and his campaign videos for these elections have promoted a glossy vision of a dynamic country that has flourished during his time in charge: a place where ambitious young people found startups, a professional and well-equipped army defends the country against Russian aggression, and the creative industries thrive.

On the streets of Kyiv, elements of this new Ukraine are indeed visible. The nightlife and restaurant scenes are now among the best in Europe, and there is an optimism and dynamism about the city that has emerged only in the last few years.

The problem for Poroshenko is that for the majority of Ukrainians, especially those outside the capital, this country is not one they know. Millions have already voted with their feet, fleeing the country in search of better wages, some eastwards to Russia, others to Poland and further west.

Poroshenko has portrayed the visa-free agreement he signed with the Schengen group of EU countries as a major achievement, but its of little use to millions who cant afford to travel. Utility bills have risen sharply, infrastructure remains poor, and the judiciary remains corrupt and beholden to political and business interests.

A last-ditch attempt by Poroshenko to tap into nationalist sentiment and portray the Russophone Zelenskiy as a Kremlin stooge has fallen flat, with most Ukrainians apparently favouring the softer, more tolerant vision of Ukrainianness that Zelenskiy represents.

While ordinary people contemplate giving a political novice a turn at running the country, in the embassies and businesses of Kyiv there has been a flurry of activity trying to work out even the most basic things about Zelenskiy. Will he get more serious once hes in office? Should they be watching his show for clues to his policies? Do his links to the Ihor Kolomoyskiy mean he will do the controversial oligarchs bidding as president? And how will he approach the conflict in the east of the country, which has claimed more than 13,000 lives?

He doesnt really have any idea of practical solutions to real issues, its just a set of phrases. Its crazy, said one western diplomat in Kyiv. His people come in to see us and the first question we ask them is what they know about his commitments to Kolomoyskiy, and they tell us they themselves have no idea, the diplomat said.

The French president, Emmanuel Macron, received Zelenskiy in Paris earlier this month, but for most foreign capitals he is an unknown quantity. Everyone is trying to find his personal phone number so that they can congratulate him after the vote, said Alyona Getmanchuk, who runs a foreign policy thinktank in Kyiv.

Zelenskiy has not hurried to fill in the blanks. The only wide-ranging interview he gave, between the first and second round of voting, was to a journalist who won the right to conduct it in a table tennis tournament at Zelenskiys campaign headquarters. When another journalist, Kristina Berdynskykh, asked on Facebook whether it was possible for those who were not good at table tennis to interview Zelenskiy, an aide suggested a game of cards.

The way Zelenskiy has been able to leapfrog traditional politicians, with their party infrastructure and refined campaign strategies, is testament to the fact that real democracy is flourishing in Ukraine, unlike in most of the rest of the former Soviet space. Many Russians and Belorussians watched Fridays debate with envy, imagining what it would be like to see their own leaders subjected to a stadium grilling.

But it is also a shocking indictment of the current political class. Zelenskiys team registered a political party, named Servant of the People after his TV show, in anticipation of parliamentary elections later this year. Despite the fact it has no members, no infrastructure and no campaign, polling suggests it is the most popular party in the country.

Zelenskiy won the first round of voting with 30% to Poroshenkos 16%, and a series of polls have given him what looks like an unassailable lead going into the runoff, meaning Poroshenko will have to pull off a dramatic shock to remain in power.

As victory has looked more likely, the crowd of would-be advisers, henchmen, hangers-on and mentors has continued to grow, just as it did around Zelenskiys fictional president. Some of these people, doubtless, want to maintain a place at the trough of financial favour if the centre of power shifts.

Others speak as one might about an infant regent who needs protecting from the more nefarious people around him. His advisers portray themselves as the people who will do damage control, the diplomat said.

Serhiy Leschenko, a journalist turned MP who supported Poroshenko but became disillusioned with him and is now acting as an adviser to Zelenskiys team, said: If we had a new president who was not prepared for the work its a bad option for Ukraine, so we decided to help. He criticised Poroshenko for his failures, and said Zelenskiy might make a good president after all. Hes demonstrated progress and has studied very well for his new role.