Kirsten Gillibrand is campaigning by living her best life. So why aren’t voters responding? 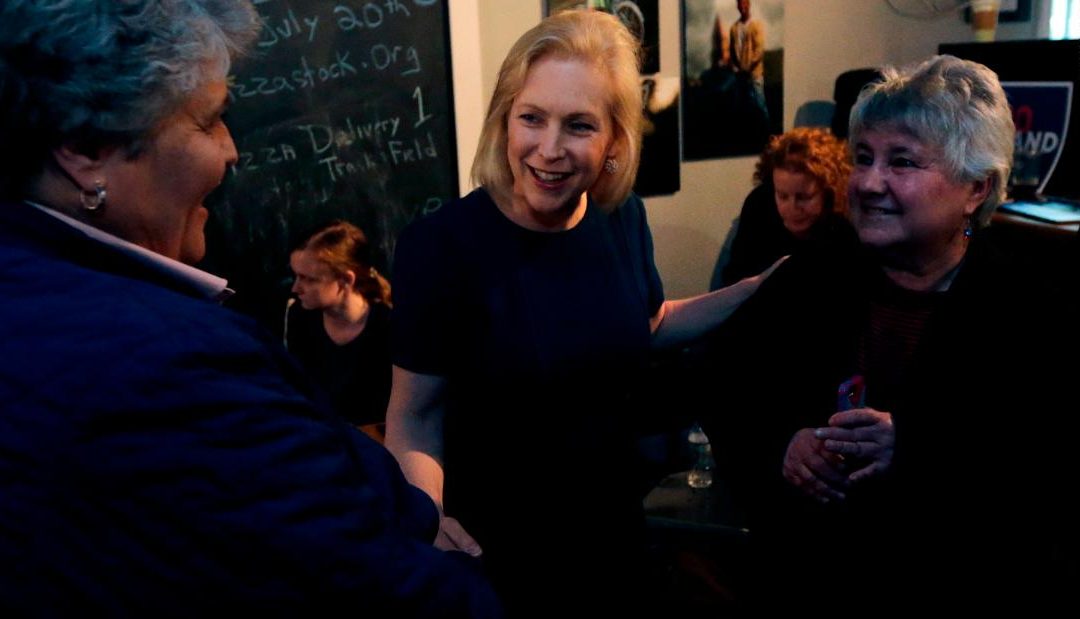 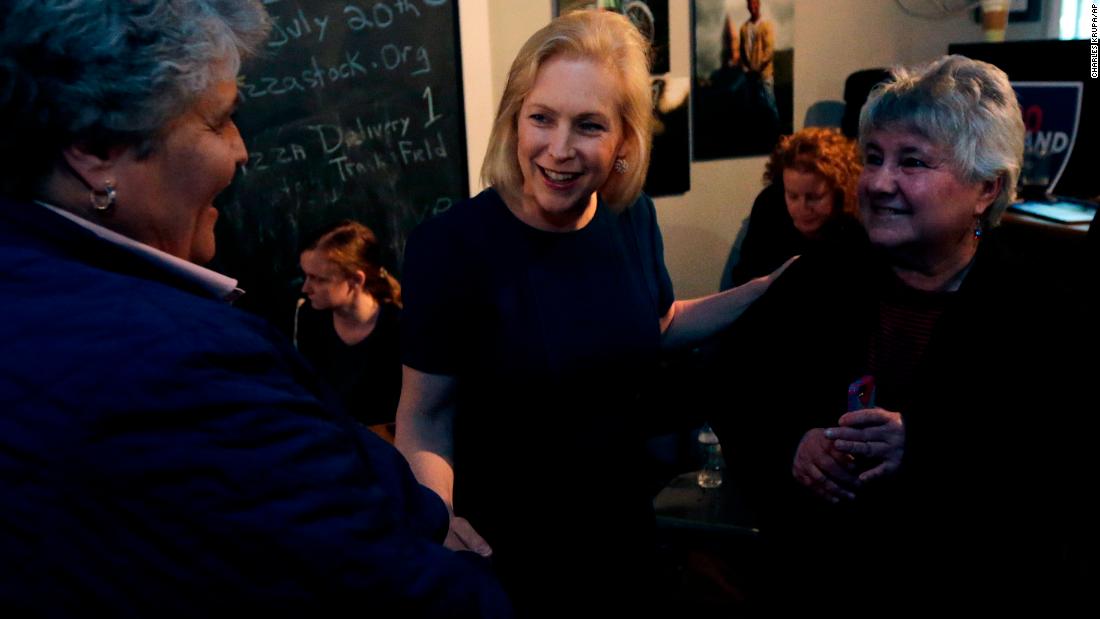 Manchester, New Hampshire (CNN)It’s 6:30 a.m. on a Saturday and Sen. Kirsten Gillibrand is wide awake and visibly pumped that The Killers is blaring in an exposed brick cycling studio here in downtown Manchester.

“You don’t really come here to be comfortable,” shouts another Kirstin, the instructor here at FortCycle. “I don’t even know how we keep going!”
Covered in sweat after the class, Gillibrand’s competitive streak comes out as she asks her aides how many miles they rode in the 45-minute session. When Meredith Kelly, her communications director, sheepishly tells her 13 miles — the high score of the day — Gillibrand exclaims, “You out spun Jess,” a reference to an earlier class with Jess Fassler, the senator’s longtime aide and now campaign manager.
“This,” she told CNN as the Gillibrand posse sipped smoothies, “is why we have the most fun.”

‘Let voters know who I am’

It doesn’t take long on the campaign trail to see that Kirsten Gillibrand is having a great time.
“I probably am having more fun than the other candidates,” she said with a laugh in an interview with CNN.
But there is a harsh irony to this upbeat attitude: Gillibrand’s campaign, despite the joy, has gone nowhere since she announced earlier this year. The senator’s polls are sagging — a recent Monmouth University poll found her with less than 1% in New Hampshire, she has yet to hit the fundraising threshold outlined by the Democratic National Committee — a mark that a series of lesser known candidates have met, and people coming to her events have begun to worry she is being engulfed by the massive field of Democrats.
Gillibrand said in an interview that she was well aware of these issues. When asked why her campaign hasn’t taken off, the senator jumped in.
“Not yet,” she interjected.
Gillibrand said she is confident that her campaign will get its time in the spotlight.
“I need to earn my moment and it will be in the future, which will be just fine by me,” she said. And to do that, Gillibrand believes she needs to show voters what makes her “authentically” her.

Gillibrand’s campaign aides — from her digital staff to her content department to her most senior aides — are hyper vigilant for moments on the campaign trail that, with a little editing and a few clicks, can be turned into semi-viral moments that show the senator’s funny, athletic and — at times — goofy side.
The latest example of this was Gillibrand sinking a shot while playing beer pong with college students in New Hampshire. The clip, which shows a perfect shot by Gillibrand followed by a celebration, was posted online, emailed to supporters and used to raise money.
This is far from the only example of Gillibrand living her best life on the campaign trail.
Saturday morning’s spin class ended up online shortly after the crew left the studio, captured by an aide who stealthily filmed from across the room.
Voters have seen Gillibrand arm wrestle an Iowa Democrat, swap wardrobes with drag queens in Des Moines and play foosball with a trio of young people.
She made an impromptu sledding stop early in her campaign, went bowling with Showtime’s Desus & Mero in Troy, New York, and, after she was featured in an Iowa caucus goer’s determined search for ranch dressing, embraced the moment by working out in a T-shirt that blared, “Just trying to get some ranch.” The latter video has been viewed more than a million times.
All of these videos have resonated with Democrats, especially younger voters.
“I appreciate it,” said Kyle Madden, a 23-year-old graduate student at the University of New Hampshire who attended a Gillibrand event on Friday. “I think a lot of it shows that she is unapologetically herself.”
Emmy Bengtson, Gillibrand’s deputy communications director and head of digital, said these videos are only possible because of Gillibrand’s “joyful, spontaneous” personality, but that the campaign is well aware nothing they post can look staged.
“We know that the internet has a really low threshold for BS, and we know that the best thing we can do is just showcase Kirsten being herself,” Bengtson said. “Luckily we have a candidate who is that kind of person.”
All of it makes Gillibrand laugh.
“We are trying to let voters know who I am,” she said. “If you can like give a little slice of life about what’s happening on the campaign trail in all its forms, they’ll get to know me as the person that I am.”

Underneath that joy, however, is obvious frustration inside Gillibrand.
She entered the presidential race as a top name, someone who had operated on the national stage for years and who had a deep donor base to help fund her effort. But, with now more than 20 Democrats in the race, she finds herself in the middle of the pack and relying heavily on her Senate campaign fundraising account to finance her presidential effort.
The thing that appears to frustrate Gillibrand the most is the fact she has yet to hit the 65,000-donor threshold, while candidates like businessman Andrew Yang and author Marianne Williamson have reached the milestone that helps candidates qualify for the first and second Democratic debates.
And her ire over that threshold is aimed at the Democratic National Committee.
“That’s an odd measurable,” she said bluntly of the 65,000-donor threshold. “Like, why do you make that your measurable as opposed to have you won elections before and have you ever run statewide before and how many votes have you gotten before and have you passed legislation and are you effective in your job?”
She added: “I think it’s random and inaccurate, but it’s their choice. They’re the DNC, so I’ll follow the rules that are given and I’ll have to play by the rules. … I don’t think it’s a measure of success. I don’t think it’s a measure of electability. I don’t think it’s a measure of quality of candidate. I think it’s just a measurable about how many online folks like you, which is not determinative of any of the things that matter about whether I’d beat Trump. At all. Not at all.”
When pressed on whether it bothers her personally that she is being passed on that measure by others, she lets out a hearty, “No!”
“Because if Madonna was running, she’d have a million supporters,” she added. “She’d have more than anybody.”
She added: “What having followers is a measurable of is whether you’re famous, it’s a measure of whether people know enough about you to send you a dollar.”

Gillibrand’s stump speech throughout her two-day New Hampshire trip this weekend focused on a host of key campaign themes — Medicare for All, gender equality and the need for more courage in Washington, to name a few.
But at multiple stops on Saturday, the New York senator hung on the story about her first campaign, when she ran for Congress against Republican incumbent John E. Sweeney in 2006. The district leaned heavily Republican and Gillibrand tells a story about how her pollster for the race — who is also her pollster for her presidential campaign — said that she was a longshot because the district had “more cows than Democrats.”
The story is a constant laugh line at events, but for Gillibrand, it offers a point for her struggling campaign: Don’t underestimate me.
“My opponent never took me seriously,” she said at a coffee shop in Derry. “Which is why I know I am going to beat Trump, because he is not going to take me seriously.”
Gillibrand, in an interview after the event, let out a hearty “yeah” when asked if she felt she was currently being underestimated in the race for the Democratic nomination.
“I think it’s just gender bias. I think people are generally biased against women. I think also biased against young women,” she said. “There’s just bias and it’s real and it exists, but you have to overcome it.”
And the senator believes a candidate overcomes it by introducing voters to who they truly are — more than just policy, but also personality.
“Voters will give a woman a shot. They just have to get to know her,” Gillibrand said. “They might make a judgment without knowing her, but once they meet her and know who she is and why she’s running, it will give her that opportunity.”
She added, buoyantly, “If I’m going to be the candidate of the women’s vote, which I fully intend to be, those voters might not come home until October or November or December.”