From crypto winter to crypto weirder 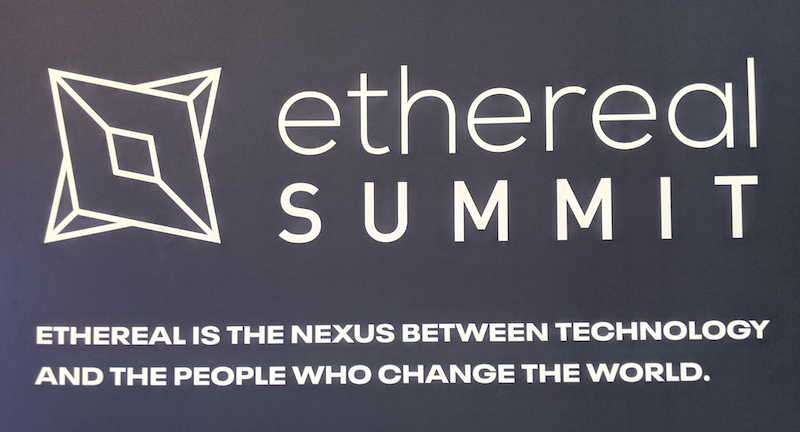 Captain Kirk and neo-Dadaists. Repugnant markets and legendary cryptographers. “Digital couture” auctioned by CryptoKitties developers. Distributed autonomous art organizations. A keynote speech looking back from 2047 at the near-apocalypse of 2026, from which we were saved by a new, fully tokenized economy. Yes, that’s right: NYC Blockchain Week has begun.

Where to begin? I suppose with context. This week’s series of cryptocurrency conferences kicked off with “Ethereal,” hosted by Consensys, a company/incubator/studio mostly devoted to decentralized software and services built atop the Ethereum blockchain … although they also acquired an asteroid-mining company last year. Subsequently they laid off 13% of their staff, in the depths of the notorious “crypto winter” that followed the crypto bubble which ended abruptly last January.

You read it here first, though: we are now moving from crypto winter into crypto weirder.

In fairness, the Ethereum community has long been home to the starry-eyed idealists, utopians, and … let’s diplomatically call them “original thinkers” … of the blockchain world. Eyebrow-raising proposals are nothing new. At the same time, Ethereum’s programmability also attracts many hard-headed money people increasingly fascinated by the prospects and potential profits of “DeFi,” decentralized finance.

DeFi, to oversimplify, incorporates and transcends the ICO craze of 2017-18 (most of which were Ethereum tokens) into decentralized platforms for loans, currency stabilization, insurance, clearinghouses, even derivatives, and much more. Its current poster child is the MakerDAO, a “stablecoin” system, i.e. a token intended to maintain a constant dollar value, maintained not by direct fiat collateral but by a complex architecture of cryptocurrency loans orchestrated by smart contracts.

But if you ask DeFi’s true believers, MakerDAO is merely an initial proof-of-concept of the larger DeFi vision. Its long-term prospects are immense, spanning all of the many tentacles of Wall Street and the financial industry, and immensely valuable. Assuming regulators are willing to play ball, of course…

And so the attendees at Ethereal are a colorful mix of serious financial and legal types. In the first group: former hedge-fund billionaire Michael Novogratz, or Rocket Lawyer CEO Charley Moore, there to announce the beta launch of their “Rocket Wallet” offering “legal contract execution and payments on the Ethereum blockchain.” In the second category: the abovementioned starry-eyed dreamers, weirdos, and artists, with whom you might find yourself discussing the dangers of a generalized on-chain AI ArtDAO which might run amok and transform the planet (and humanity) not into paperclips but into a planet-scale work of art. I suppose there are worse ways to go.

Do I sound dismissive? Au contraire; I’m all about the dreamers and weirdos. (I mean, I am one, although I was probably the only attendee whose pet Ethereum project is explicitly designed to never have any monetary value. Even the dreamers generally still want to get rich.) The most interesting thing about the blockchain / cryptocurrency space is that it is full of people who do not hesitate to question some of the most basic underpinnings of our society, our social constructs so fundamental they are often mistaken for laws of nature.

The concept of money. The existence of financial intermediaries. The partitioning of the world into geographically defined nation-states. That sort of thing. What’s more, they question them with an eye towards improving or even replacing them, generally with (admittedly usually at-best-half-baked) iterations and solutions in mind. Such people are definitionally weird, and tend to view the status quo so skeptically that they believe it’s inevitably headed for some kind of apocalyptic demise … but their questions are valuable even if you don’t agree with their answers.

Not least when they highlight genuine problems with the way things currently work. Leah Callon-Butler of intimate.io spoke at Ethereal about “repugnant markets,” which are entirely legal but which face such social disapproval that ordinary business and transactions face substantial difficulties. In the US, of course, that generally means sex — and not even porn. Within the last few years, Chase Bank has refused to process payments for a condom company; Square rejected Early to Bed, a woman-owned sex toy store; and CES banned a sex toy after they gave it an award. One can’t help but think that there has to be a better way.

Similarly, sure, it’s amusing that, after announcing a partnership with Mattereum (who I’ve written about before) to track the provenance of collectible memorabilia, William Shatner got into a Twitter fight about the fine technical details of data storage on the Ethereum blockchain — and won by dint of being completely correct! — but it also highlights the fact that provenance is a really hard problem, and existing solutions are deeply imperfect at best.

So bring on the crypto weirder, says me. Speculation, trying to make money from the oft-inexplicable ups and downs of the “crypto casino,” is boring and breeds scams, hucksters, bad faith, fraud, and outright robbery. Actually trying to build distributed networks and platforms, which do old things in new disintermediated ways, or better yet entirely new things — now that’s interesting, even if/when 90+% of them fail. The crypto weirder means more of the latter and less of the former. It’s about time.