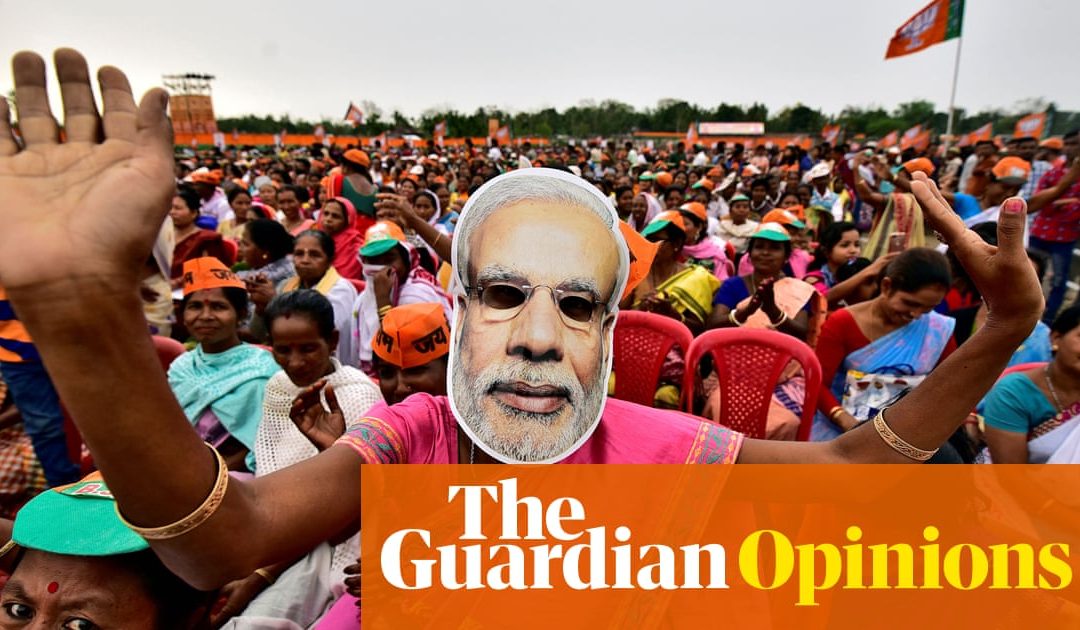 If the Indian prime minister is returned to office, his sectarian politics will make bigotry the defining ideal of the republic, says author Kapil Komireddi 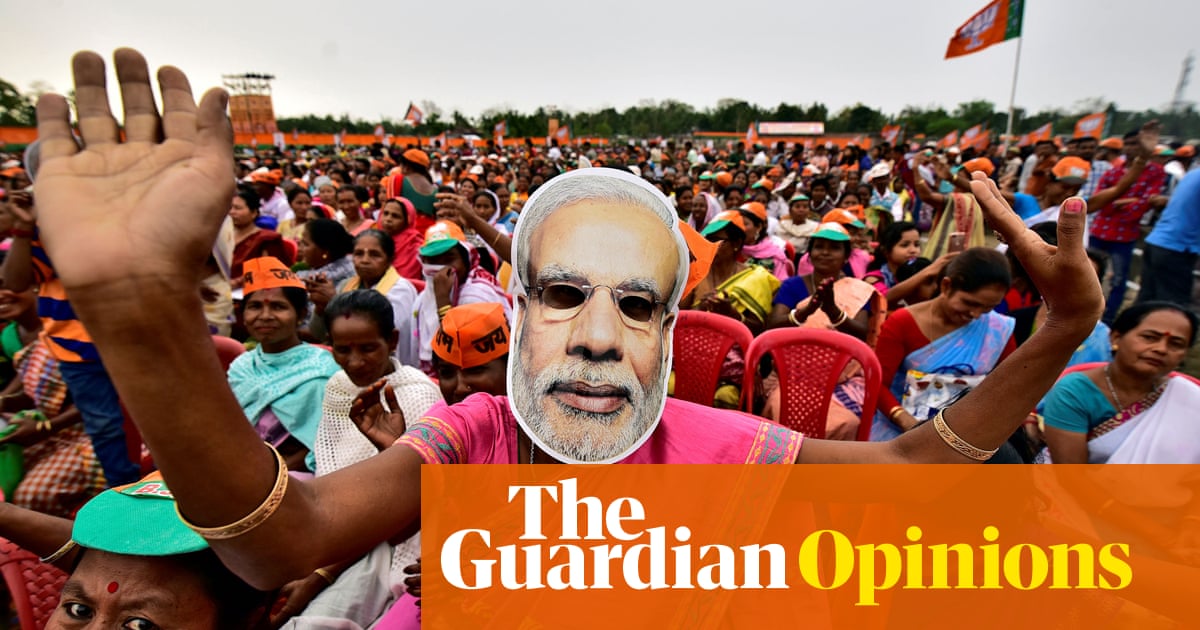 Indian elections are a marvel to behold. The rules stipulate that no citizen should have to travel more than 2km to vote. So the state goes to the voters. Carrying oxygen tanks, election officials scaled the Himalayas to erect a voting booth in a village in Ladakh, 4,500 metres above sea level. In western India, a polling station was set up for the lone human inhabitant of a wildlife sanctuary. In eastern India, officials trekked for an entire day to reach the sole registered voter, an elderly woman, in a remote village. By the time voting closed on Sunday, some 600 million people had cast their ballots, 10 million of them for the first time.

In 2019, the worlds biggest election was much more than a ritual of democracy. It was the most consequential vote in the lifetime of a majority of Indians alive today. India under Narendra Modi has undergone the most total transformation since 1991. This election has, in effect, been a referendum on whether the republic retains its founding ideals or, if Modi wins another term and exit polls released on Sunday show him winning with a comfortable majority it leaps to a place of sectarianism from which return may be close to impossible.

None of the big promises that delivered Modis Hindu-first Bharatiya Janata party (BJP) an absolute majority in parliament in 2014 the first time in 30 years that a single party was voted into power have been honoured. Modi pledged to create 20m jobs annually. Today, the rate of unemployment is the highest India has known in 20 years. He enraptured young Indian voters with visions of what he called smart cities: facsimiles of Seoul and Singapore on the Deccan Plateau and the northern plains clean, green and replete with skyscrapers and super-fast trains. There is nothing of the sort in sight. He vowed to purify the Ganga, the river of India as Jawaharlal Nehru called it. Five years later, it remains a stream of unquantifiable litres of sewage and industrial effluents.

Worse, democratic institutions have been repurposed to abet Modis project to remake India into a Hindu nation. The election commission, which has conducted polls in impossible circumstances since 1952 and is revered for its incorruptibility and fierce independence, functioned during this vote as an arm of Modis BJP, too timid even to issue perfunctory censures of the prime ministers egregious use of religious sloganeering. The military has been politicised and the judiciary plunged into the most existential threat to its independence since 1975, when Indira Gandhi suspended the constitution and ruled as a dictator for 21 months.

The myth of Modi as a technocratic moderniser crafted by an ensemble of intellectuals and industrialists who devoted themselves to the cause of deodorising Modi, a Hindu supremacist who as chief minister of Gujarat in 2002 presided over a pogrom of Muslims collapsed early on under the burden of the incompetence, vainglory and innate viciousness of the man who once described refugee camps housing displaced Muslims as baby-producing centres.

And five years on, we have more than a glimpse of the New India he has spawned. It is a reflection of its progenitor: culturally arid, intellectually vacant, emotionally bruised, vain, bitter, boastful, permanently aggrieved and implacably malevolent; a make-believe land full of fudge and fakery, where bigotry against religious minorities is among the therapeutic options available to members of a self-pitying majority frustrated by the prime ministers failure to upgrade their economic standard of living. In the worlds largest secular democracy, Muslims have been lynched by mobs since Modi came into office for such offences as eating beef, dating Hindus and refusing to vacate their seats for Hindu commuters on crowded trains.

Sectarian prejudice has always existed in India. The room for giving it homicidal expression has expanded exponentially under Modi. The mood music for this terror has been composed and played by card carriers of Hindu nationalism. The Muslims they butchered were not victims of unpremeditated paroxysms of rage but exhibits in an organised campaign to entrench Hindu supremacy. The deification of Modi is the consequence of a crude awakening of many Hindus to their past: a haphazard response to the traumas bequeathed by history especially the partition of India to accommodate the demands of Muslim nationalism. Why must Hindus bear the burden of secularism? a Bengali voter asked me furiously. Decrying it as a suicidal attitude that comes naturally to Hindus, another voter in Bangalore told me that secularism would result in Hindus being outbred and ruled over by Muslims.

Wherever I have travelled, the refrain from Hindu voters, with very few exceptions, has been identical: Modi has failed us, yes, but he has at least put Muslims in their place. Writing about Algerian independence, Raymond Aron called it a denial of the experience of our century to suppose that men will sacrifice their passions to their interests. Modi, unable to enhance the lives of people, has meticulously incited their passions.

Indias tragedy is that just when it is faced with an existential crisis, there is no pan-Indian alternative to the BJP. What remains of the main opposition Congress party is bleached of conviction. The party that led India to independence from British colonial rule shed its belief in democracy in the 1970s, made unconscionable compromises with Hindu nationalists in the 1980s, and grew monstrously corrupt in the 1990s. Indira Gandhi suspended the constitution in 1975 to brutalise Indians. Modi will seek to write his ideology into the constitution to divide them.

If he succeeds, Hindu nationalism will become the official animating ideology of the republic. Bigotry will not then be a deviation from the ideals of the republic: it will be an affirmation of them. The Hindu-nationalist project will neither dissipate nor die even if Modi is defeated, it will go into remission. The BJPs leaders and cadres will outgrow Modi as he outgrew his mentors and regroup. They are incompetent in government but they are peerless in opposition.

Modis pre-prime ministerial career is a lesson in how Indias shameless business elites can be co-opted to pimp for their cause. Many of them distanced themselves from him after the anti-Muslim violence on his watch, but proceeded to demonstrate that a commitment to the market is all they ask in return for their services. And on any given day, there are tens of thousands of activists, spread out across India, preaching the gospel of Hindu nationalism and fomenting a revolution from the bottom up. They believe in their cause. Most of their adversaries long ago abandoned theirs.

Kapil Komireddi is an Indian writer and author of Malevolent Republic: A Short History of the New India, published in May 2019