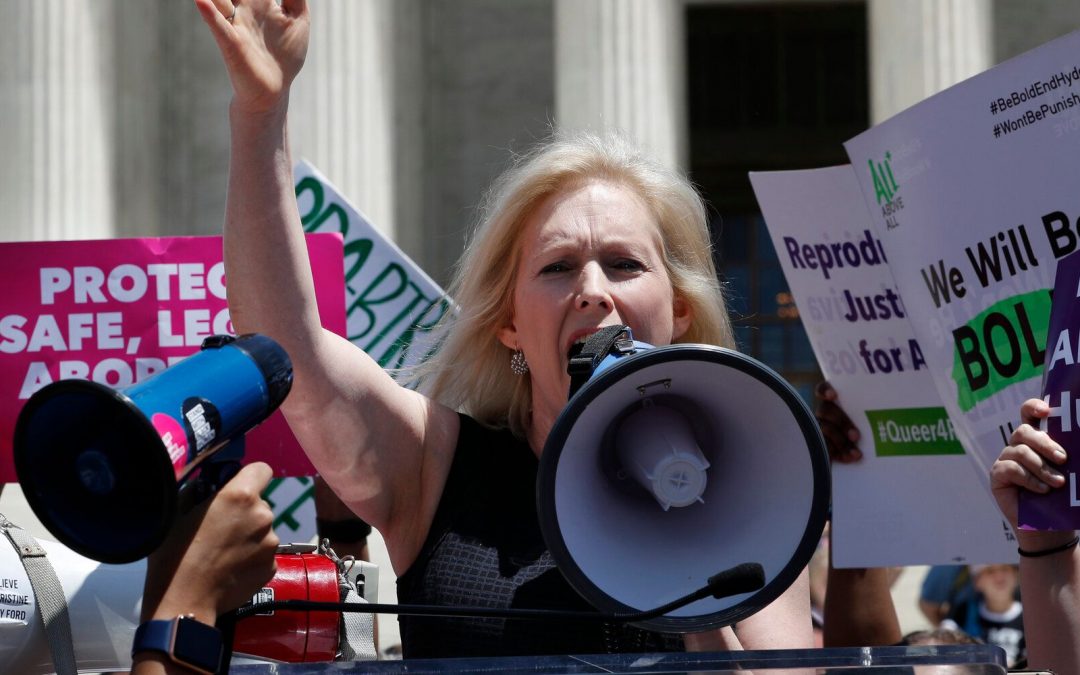 Sen. Kirsten Gillibrand (D-N.Y.) on Wednesday made a sweeping promise to focus her first 100 days in office if she wins the 2020 presidential election on a wide-ranging set of progressive proposals to support children and families.

The ambitious agenda, which Gillibrand is calling the “Family Bill of Rights,” includes promising parents a right to maternal care, paid leave, affordable nursery and child care, universal pre-kindergarten, and the right to fertility treatments or adoption regardless of religion, or sexual orientation or identity.

“The resources and care available at the start of a child’s life have a crucial impact on their health, safety, development, and future success — but not every child starts on equal footing,” Gillibrand wrote in a Medium post on Wednesday announcing her plan. “Families and kids face huge disparities in opportunity and resources depending on their income and zip code, and the gap is wider for families of color. That isn’t fair, and it isn’t acceptable.”

Gillibrand has made feminist issues the centerpiece of her recent Senate career and now her campaign for the Democratic presidential nomination. Many of the proposals she packaged on Wednesday were already planks in her presidential platform or components of legislation she has endorsed as a senator.

But what distinguishes this agenda, said policy experts, is that it acknowledges how many factors must intertwine to promote a new family’s well-being.

“So far, as candidates roll out different elements of their platforms and visions, it’s been piecemeal,” said Vicki Shabo, a senior fellow at the nonpartisan think tank New America, whom HuffPost asked to review the platform. Gillibrand’s plan is the first to acknowledge how disparate factors like health care, paid leave, and quality child care are interconnected, Shabo continued. “That’s very exciting. Policymakers are often very good at tackling peoples’ lives and problems as if they’re siloed. Real people experience big life challenges as a package.”

The agenda is a lineup of most of the major family and maternal care proposals Democrats in Congress have supported over the past several years — from a 12-week paid parental leave proposal backed by nearly every Democrat running for president to bills on maternal health and adoption Gillibrand has introduced herself.

The proposals are not all of the pie-in-the-sky variety. Universal pre-kindergarten proposals have flourished in blue and red states alike, and a growing number of states now guarantee paid parental leave and insurance coverage for fertility treatments.

The agenda broadly reflects Gillibrand’s oft-stated belief that feminist and progressive family issues are not niche policies, but can form a winning platform. By promising to enact those proposals in her first 100 days in office, Gillibrand is essentially vowing to prioritize those ideas above the other progressive agendas competing for attention in the presidential primary.

Her outline for paid family leave resembles her proposed FAMILY Act, which Gillibrand has introduced every year since 2013, and popular, bipartisan legislation from Sens. Patty Murray (D-Wash.) and Bob Casey (D-Pa.) to fund 12 weeks of paid parental or family care leave through a modest new payroll tax.

Gillibrand also put forth a slate of proposals aimed at making adoption and fertility treatments affordable for more families, such as making the existing adoption tax credit refundable to families who don’t owe federal income taxes.

One idea echoes a bill requiring all private-sector and many public health insurance plans to cover IVF, which her fellow 2020 contender, Sen. Cory Booker (D-N.J.) introduced with Rep. Rose DeLauro (D-Conn.) in May 2018. (Fifteen states currently require most insurers to cover or offer coverage for fertility treatments.) Another plank involves Gillibrand’s 2017 proposal to prevent public spending on adoption and foster agencies that discriminate against LGBTQ parents or youth.

To help low-income families with newborns, Gillibrand supports delivering new parents “baby bundles,” boxes of necessities that can be repurposed as a crib, an idea that several US states have adopted from countries like Finland.

One seemingly new idea in her platform is to make the federal Children’s Health Insurance Program a universal program until the enactment of “Medicare for All,” which Gillibrand also supports. To make the program universal, her campaign said she supports eliminating CHIP’s low-income requirements and automatically enrolling all newborns.

Making CHIP enrollment automatic for eligible children, which some states do already, could conceivably cut the number of uninsured children by more than half. Nationwide, about 5% of children are uninsured; more than half of those are eligible for CHIP, and another 10% meet the income requirements but are barred because of their immigration status.

The proposal is relatively novel, and some experts, speaking on background because her plan was not yet detailed, cautioned a careful proposal was necessary to avoid confusing or burdening new parents who have existing, private insurance.

Gillibrand is not alone in making maternal and childhood issues a key factor in her presidential campaign. Elizabeth Warren (D-Mass.) released a plan to fund universal child care in February. Like Gillibrand’s MOMS Act, Sen. Kamala Harris (D-Calif.) has targeted proposals at reducing the disproportionate rate of maternal mortality for black mothers.

Gillibrand’s announcement reflects how ambitious the Democratic field has become at proposing sweeping, progressive policy ideas — and the candidates’ readiness to finance those ambitions by taxing the richest individuals.

To pay for her set of ideas, Gillibrand calls for using proceeds from a proposed tax on financial transactions in the stock market. Gillibrand co-sponsored such a tax, aimed to curb speculative and high-volume trades, with Sen. Brian Schatz (D-Hawaii) in March.

The platform she announced Wednesday does not come with a specific overall price tag. But a nonpartisan analysis said the proposed tax could raise as much as $777 billion over a decade, a figure that could vary depending on how it changed investment behavior.

In 2016, Sen. Bernie Sanders (I-Vt.) suggested a similar tax as a means to pay for free college. Warren’s universal child care plan would rely on her proposed wealth tax to fund a network of government-funded care centers. In addition to making child care more affordable — which Gillibrand’s agenda would accomplish with tax credits — Warren’s automatically gives government the ability to set quality and wage standards for child care providers.

“For too long, crucial issues that inform the well-being of whole families and communities — from paid leave to child care to maternal health care — have been dismissed as secondary issues or ‘women’s issues,’” Gillibrand wrote in her post. “I’ve spent my career fighting for those issues as what they are: front-and-center determinants of our whole country’s economic security, opportunity, and success.”