Some councils ‘running out’ of reserve cash 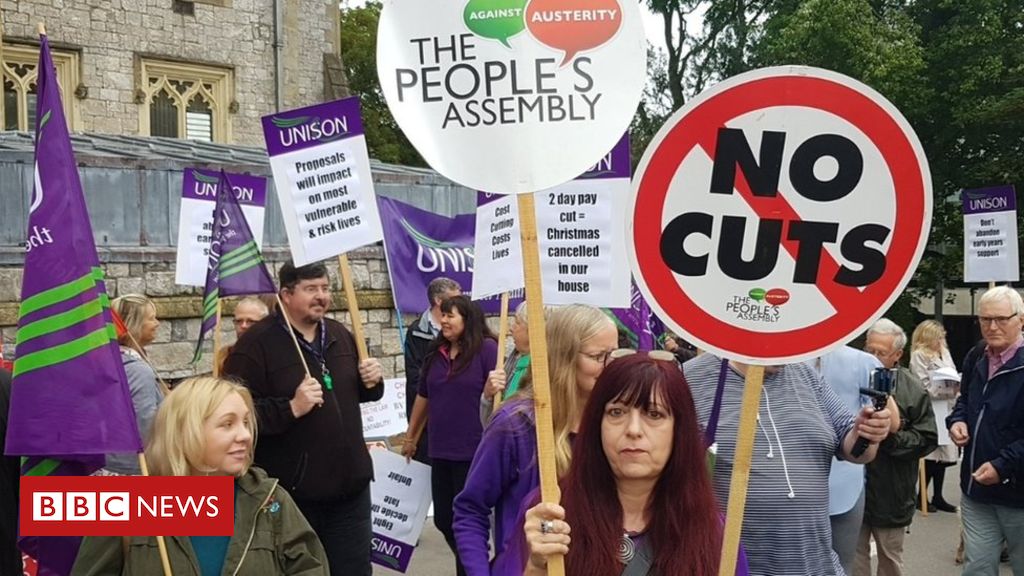 Some councils in England have been warned they risk running out of cash reserves if recent spending continues.

Analysis by the BBC has identified 11 authorities the Chartered Institute of Public Finance and Accountancy (Cipfa) said would have “fully exhausted” reserves within four years unless they topped them up.

The government said councils were responsible for managing their funds.

Councils have faced cuts to their government funding and rising demand for services such as social care, while MPs have warned children’s services are at “breaking point”.

Cash reserves – money held back for specific projects or emergencies, such as flooding – are seen as a measure of councils’ financial security.

The BBC analysis of government data follows work by Cipfa, which published a “resilience” index of councils, but stopped short of naming those it warned were depleting reserves the fastest.

The warning was based on the latest data available, comparing reserves as of March 2018 with March 2015.

The analysis reveals which 11 of the 152 major English councils have used so much of their reserves since 2015 that Cipfa said they would run out within four years if spending patterns continued.

Which councils have seen the biggest fall in reserves?

Councillor Richard Watts from the Local Government Association said: “Some councils are facing a choice between using reserves to try and plug funding gaps or further cutting back local services in order to balance the books.

“This is unsustainable and does nothing to address the systemic underfunding that they face. Ongoing funding gaps are simply too big to be plugged by reserves.”

The data showed Northamptonshire County Council recorded a 91% drop in reserves. The authority was forced to stop non-essential spending during 2017-18.

Thurrock Council was shown to have spent 58% of its reserves but insisted it was planned and the authority was not running out of money.

Somerset County Council said it was putting money back into its reserves after data showed a 73% fall.

Croydon Council appeared to have spent more than half of its reserves but said the government data was “inaccurate” and its reserves “remain strong”. The figures were supplied to the government by the council itself but it has asked for them to be corrected.

Why do reserves matter?

Councils cannot borrow money for day-to-day spending so hold reserves for unexpected events or emergencies, such as flooding.

Under the Conservative-Lib Dem coalition government local councils were told they should not “hoard” billions of pounds in their reserves.

In guidance to councils Cipfa said: “Balancing the annual budget by drawing on general reserves may be viewed as a legitimate short-term option. However, it is not normally prudent for reserves to be deployed to finance recurrent expenditure.”

It stressed that there may be “good reasons” for councils to have used reserves for planned spending but added that “continued depletion of reserves may be a sign of financial stress and being unable to deliver a balanced budget”.

Professor Tony Travers of the London School of Economics said: “We did see for many councils reserves increased during 2017-18, but the pressure on budgets is not going to go away and for some the need to make further use of reserves is going to be unavoidable.

“Emergencies can happen and sudden increases in spending can be needed. Councils need to be resilient or they end up in the position Northamptonshire was in. However, they don’t know their funding position from one year to the next.”

In a report on the financial sustainability of councils in 2018 the National Audit Office said: “Reducing reserve levels means that local authorities have less scope to support ‘invest to save’ programmes, and any delays in delivering savings or unexpected cost pressures have a greater impact on their financial position.”

What do the councils say?

Councils said they face shortfalls in funding due to cuts in government grants. However, those identified as having used a lot of their reserves insisted they were not running out of cash.

Northamptonshire County Council overspent by millions of pounds, leading to plans for it to merge with the smaller district councils. It said there had been “an improvement and stabilisation” during 2018-19 with £20m going back into reserves.

Somerset County Council faced a budget gap of £28m over three years and announced cuts to various services. It intends to put more money into reserves, reaching £19m by March 2020. It said the reserves it used included funding provided by the government to cope with severe flooding.

Rotherham Council said its reserves had not fallen as much as the government data showed, due to changes in accounting. A spokeswoman said: “Although the picture is better than is portrayed here, we have still had to use our reserves due to increased demand on social care services over the last few years, as the funding from central government is not enough to manage these costs.”

Thurrock Council said it was in “one of the strongest financial positions of any unitary authority” in England and had frozen council tax. It said its reserves had stayed stable and it had used “earmarked” reserves as planned. “Earmarked reserves do not represent the council’s financial strength in any way and to use them to suggest otherwise is misleading and incorrect,” said deputy leader Councillor Shane Hebb.

Croydon Council said the figures it gave to the government were inaccurate and it had not run down its reserves. It added: “We expect our finances to continue to remain stable and solvent.”

Stoke-on-Trent City Council said auditors had “no concerns to raise” over its accounts and it was budgeting to increase reserves.

Sutton Council said its figures were from an earlier “estimate” and it had £33m in reserve in 2018, not the £30.8m in the government data. It added: “Reserves are actively managed according to our consideration of risk and programme of work.”

Knowsley Council said it had funded a £16.6m pension deficit from reserves, but had budgeted to “replenish” them over the next two years.

Greenwich Council said it had a £125m funding shortfall but stressed most of the reserves used were for planned regeneration projects, with figures also showing a change in accounting for schools’ funds. The council said asking people to pay more council tax “has not been easy.”

Medway Council said it had used reserves to cover an “unexpected” number of business rates appeals as well as a planned “community hub programme”.

Why can’t councils just use the money?

Heather Jameson, editor of the Municipal Journal, said councils had done an “extraordinary job” in keeping their books balanced by cutting staff, remodelling services and starting commercial ventures, but it was “no longer enough”.

“Despite past political pressure to run down reserves to pay for services, any council with a sound financial plan is likely to hold money in reserve,” she said. “While health services can overspend or ‘go bust’ councils are legally required to balance their books and failing to keep some cash for emergencies is a risk that most are not willing to take.

“However, the pressure on budgets is making it increasingly difficult to hold cash in reserves.”

The Institute for Fiscal Studies said despite increases in council tax, local authorities had made substantial cuts to protect adult social care and children’s services.

He said: “Councils are democratically elected bodies responsible for making their own financial decisions and managing their resources.