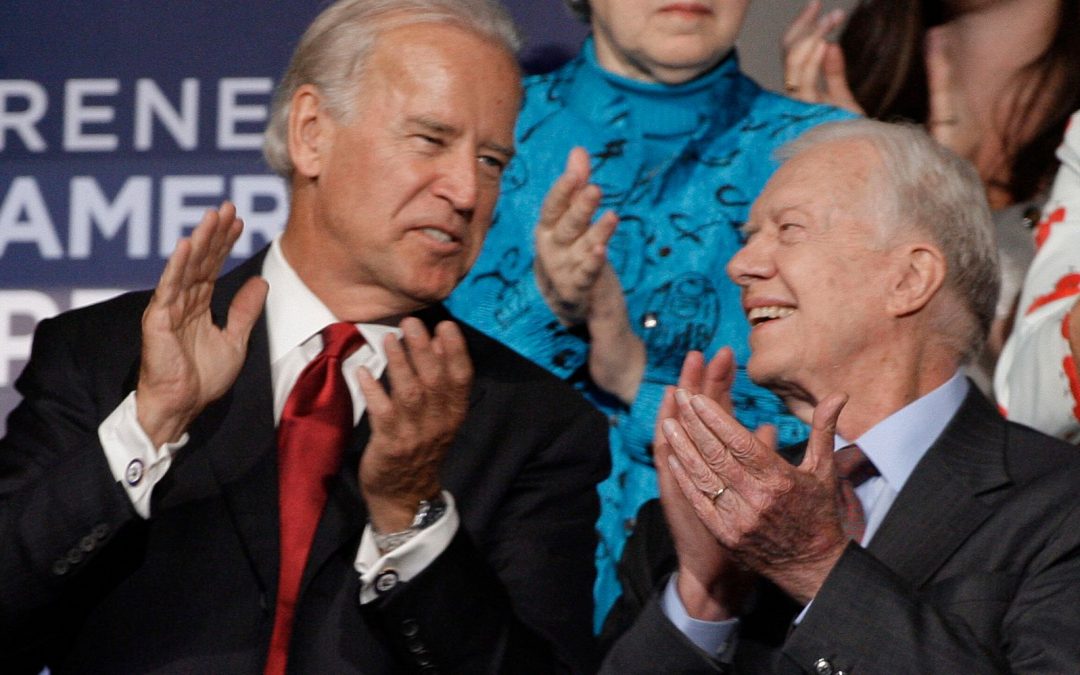 Until he abruptly reversed course Thursday, 2020 presidential candidate Joe Biden was seeking to become the first Democratic presidential nominee since President Jimmy Carter to support the law banning the use of federal funds on abortion services.

Though nominees through the decades had varied stances on choice ― from John Kerry’s “personally pro-life” dance to Hillary Clinton’s full-throated support for reproductive freedom ― they each came out in support of repealing the Hyde Amendment’s ban on federal funding for abortion services even if, like Biden, they had to flip-flop.

A devout evangelical Christian, Carter took what would become a common abortion position for Democratic presidential nominees. He was personally opposed to abortion but would respect the court’s constitutional interpretation legalizing the practice. But Carter went a bit further. He also supported the Hyde Amendment’s ban on Medicaid funding being used for abortion services.

“I personally don’t believe the federal government ought to finance abortions,” Carter said at an October 1976 presidential debate.

He continued to stake out this position while in office, particularly after a series of Supreme Court decisions said that the federal government had no obligation to fund abortion services. But he did endorse exceptions to the federal ban for rape, incest and the life of the mother.

At the same time, he made callous statements about the federal funding ban that outraged women’s rights advocates both inside and outside his administration. When asked about how the Hyde Amendment made it harder for poor women to access abortion services that rich women could easily afford, Carter gave a characteristic response:

“Well, as you know, there are many things in life that are not fair, that wealthy people can afford and poor people can’t. But I don’t believe that the federal government should take action to try to make those opportunities exactly equal, particularly when there is a moral factor.”

The National Organization for Women refused to endorse his reelection, even against Ronald Reagan, the first full-throated anti-abortion major party presidential nominee.

A big part of the party’s strategy since Nixon involved peeling off urban and suburban white Catholic voters from their traditional Democratic Party allegiance and highlighting the apparent contradiction between the Church and Ferraro was a way to play to these voters. (It also helped underline opposition to abortion rights as an extension of anti-feminism.)

Democrats’ 1988 nominee Massachusetts Gov. Michael Dukakis was also a pro-choice opponent of the Hyde Amendment, although he couched his support for abortion rights within his personal religious opposition to abortion. Dukakis prevailed over a number of opponents in the Democratic Party primary who did support the Hyde Amendment.

At the party’s nominating convention a section was added to its platform that, for the first time, however euphemistically, called for repealing the Hyde Amendment, “the fundamental right of reproductive choice should be guaranteed regardless of ability to pay.”

Arkansas Gov. Bill Clinton won the party’s nomination in 1992. Like Carter, Clinton was a Southern governor who backed middle-ground social positions that conformed to his increasingly conservative state, including on abortion. As governor, he had opposed spending federal funds on abortions except in the cases of rape, incest or the life of the mother and signed legislation requiring minors to obtain parental consent to get an abortion. Those positions quickly softened in the Democratic Party primary.

As the party’s nominee, Clinton openly called for getting rid of the Hyde Amendment and argued that the national health care plan he was running on would provide funding for abortion services. Reproductive rights advocates welcomed Clinton’s shift.

“It’s natural to back these kinds of pragmatic, get-along compromises in a conservative state,” Harriett Woods, then-president of the National Women’s Political Caucus, told the Associated Press in 1992. “Now he is a national candidate responsible for a broader majority. I’m pleased that he’s growing.”

In office, Clinton proposed ending the Hyde Amendment by excluding it from the budgets he submitted to Congress. The legislature, however, did not rescind the rule, but instead loosened it to allow exceptions for rape and incest. (The Hyde Amendment already provided an exception for the life of the mother.) Clinton’s health care plan would have paid for abortion coverage, but it too ran aground in Congress.

Al Gore, Clinton’s vice president, had a harder time squaring his reversal on the Hyde Amendment when he ran for president in 2000.

In his first run for Congress, Gore sought to differentiate himself from his father, a famous liberal Southern senator, by taking more conservative positions.

“I don’t believe a woman’s freedom to live her own life, in all cases, outweighs the fetus’s right to life,” he said on the primary campaign trail in 1976 bid for Tennessee’s 6th congressional district.

By the time Gore made it to the Senate in 1985 he had adopted more pro-choice positions, including claiming he had always backed Roe v. Wade. But he continued to oppose federal funding for abortions. That was until Clinton chose him to be his vice president.

Gore faced questions about his support for the Hyde Amendment immediately. He said that he still opposed federal funding for abortions, but he supported the use of federal money for abortion services in Clinton’s proposed national health care plan.

In the 2000 presidential campaign, Gore called for ending the Hyde Amendment. Sen. Bill Bradley, Gore’s lone primary opponent, attacked him for flip-flopping on this issue.

Bradley argued that Gore’s past positions on abortion made him an anachronistic choice for a more modern and liberal Democratic Party and his flip-flopping made him untrustworthy. Gore said that he had “always, always, always” supported Roe v. Wade, but had changed his mind on his support for the Hyde Amendment after it was shown to him that the policy produced “an inequitable result.” (This is practically identical to what has happened with Biden.)

Abortion rights advocates came to Gore’s defense. “The fact that he evolved doesn’t make him any less pro-choice than a Bradley or anyone else,” Kate Michelman, then-president of NARAL, said in 2000.

This evolution, or flip-flop, however you want to cut it, fed into the media-driven narrative that Gore was inauthentic while his opponent, George W. Bush, the Yale legacy child of a wealthy century-old political dynasty, was someone you could have a beer with (even though Bush was a recovering alcoholic).

Kerry’s 2004 challenge to Bush featured attacks on him as both an inauthentic flip-flopper like Gore and, as with Ferraro, being a pro-choice Catholic. Unlike Gore, Kerry had a long record of support for abortion rights and repeatedly voted against the Hyde Amendment. He did, however, argue that he was personally opposed to abortion, but did not let his personal religious views interfere with the exercise of the Constitution.

“Now, I believe that you can take that position and not be pro-abortion, but you have to afford people their constitutional rights,” Kerry said about his support for allowing federal funding for abortions.

The Hyde Amendment did not come up much during the 2008 presidential campaign. Barack Obama’s lone statement on the issue came from the Reproductive Health Reality Check questionnaire sent out by Rewire News:

“Obama does not support the Hyde amendment. He believes that the federal government should not use its dollars to intrude on a poor woman’s decision whether to carry to term or to terminate her pregnancy and selectively withhold benefits because she seeks to exercise her right of reproductive choice in a manner the government disfavors.”

When in office, however, Obama affirmed the Hyde Amendment as part of a compromise to pass the Affordable Care Act. A group of about a dozen anti-abortion House Democrats held up passage of Obama’s landmark health care bill at the last minute with demands that no federal funds for the program be used to cover abortion services. To obtain their votes, which were needed, Obama agreed to sign an executive order affirming that the Hyde Amendment principles extended to the Affordable Care Act.

Hillary Clinton, the first woman nominated for president by a major party, was a longtime supporter of abortion rights and made sure the party endorsed them openly. The 2016 Democratic Party platform was the first to ever explicitly call for the end of the Hyde Amendment. The Democratic convention also featured speakers openly discussing their abortions.

This development appeared to indicate that the Democratic Party would take the polar opposite position of the Republican Party on abortion. It would make a full-throated defense of abortion rights and move to roll back the restrictions imposed by their opponents. That was until Biden jumped to the top of the 2020 polls.

As history shows, Biden’s since-changed position on the Hyde Amendment could have made him the first Democratic Party nominee in 40 years to hold such a belief. His evolution on the issue recalls Gore’s shift of just 25 years ago. Perhaps, he’ll catch up to 2016 before the primary ends.