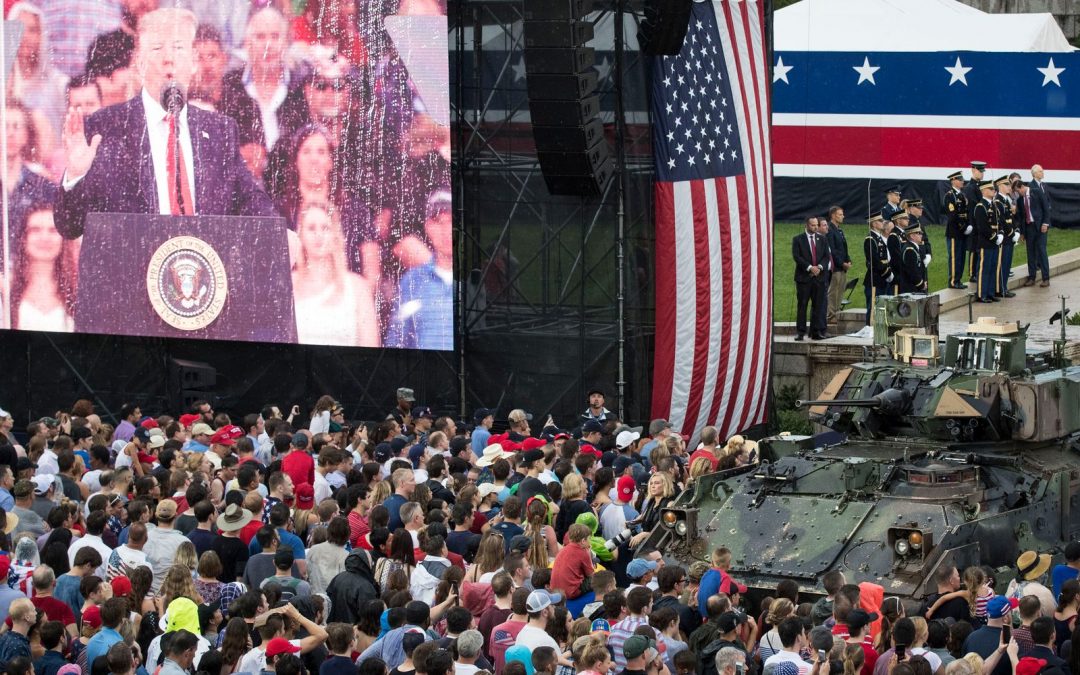 WASHINGTON ― The commander-in-chief who five decades ago claimed “bone spurs” to avoid a war because he was “never a fan” finally got the military celebration he has wanted since taking office ― but with tepid attendance and a low-energy speech whose reviews are likely to stoke a fresh round of pique from the man who delivered it.

“The First Lady and I wish each and every one of you a happy Independence Day on this truly historic Fourth of July,” President Donald Trump said Thursday from the steps of the Lincoln Memorial, a pair of armored Bradley Fighting Vehicles staged in front of him.

Trump did not explain what made it “historic,” beyond his decision to inject himself into the capital city’s annual celebration that previous presidents have not taken part in. Thursday morning, he had bragged on Twitter: “People are coming from far and wide to join us today and tonight for what is turning out to be one of the biggest celebrations in the history of our Country.”

That claim, however, wound up being clearly untrue. The crowd in the portion of the National Mall close enough to see the massive television screens set up for the event numbered possibly as little as the high tens of thousands ― in large measure because of the White House’s failure to give away enough tickets to people who would be certain not to boo or protest his speech.

In contrast, the concert and fireworks show that has been a staple of Washington, D.C., July Fourth celebrations for decades routinely draws hundreds of thousands of people to the Mall.

Trump supporters arriving without a “VIP” ticket were turned away at the entrance gates. Some were told ― falsely ― that entrance tickets had been awarded by lottery.

In fact, the White House gave away tickets last week to political appointees in executive branch agencies and Republican donors through the Republican National Committee and Trump’s reelection campaign ― even though Trump’s “Salute to America” was described as a nonpolitical event.

This week, rank-and-file members of the military were offered tickets ― in an apparent attempt to fill up the acres of space cordoned off by the Secret Service to secure the area near the president.

The effect, though, was to keep non-politically-connected Trump supporters a minimum thousand feet away from where Trump stood ― on the far side of a fence that ran across the Mall, including through the Reflecting Pool.

That, however, did not seem to bother at least some Trump fans. Stephen Moreno and his wife, Linda, flew in from Seattle specifically for Trump’s speech.

“I can see the big screen,” said Moreno, a 68-year-old retiree who served on an Army helicopter gunship in Vietnam and is now traveling the country with his wife in an RV. He said he and Linda had found a spot on the north side of the Reflecting Pool some 300 yards from the closest TV screen. “We’re here and that’s good enough for us. We’re cool with that.”

The White House for over a week has refused to detail the total number of tickets it distributed and the process it used to do so.

Trump’s inauguration 2 1/2 years ago had a modest attendance, hundreds of thousands fewer than attended that of former President Barack Obama in 2009. News reports and photographs depicting this enraged Trump, who accused the media of purposefully lowballing the crowd size to make him look bad. The day after the inaugural, in fact, Trump complained about it in a speech delivered in front of a memorial wall at CIA headquarters. He claimed ― falsely ― that possibly 2 million people had attended his inaugural.

Trump’s Fourth of July extravaganza Thursday cost taxpayers millions of dollars, although precisely how many millions is not known because the White House has refused to release the costs.

The Washington Post reported that the National Park Service is using $2.5 million in user fees collected from park visitors across the country to help pay for Trump’s celebration. That money is supposed to be used for maintaining the parks ― and the fund is currently facing a $12 billion backlog.

As a candidate and now as president, Trump has claimed a great admiration and affinity for the military ― a stark contrast to his own history with the armed forces.

Tanks and other armored vehicles had to be transported by rail from Georgia, loaded onto trucks and driven to the National Mall, an additional expense not normally incurred during Fourth of July celebrations. A Secret Service perimeter had to be constructed at the western end of the Mall to establish presidential-level security ― another extraordinary expense ― while a concert-style stage and lighting system was set up for Trump’s speech itself.

Trump’s insistence on a string of military aircraft overhead cost at least $1 million in operating costs alone. The Boeing 747 used as the primary Air Force One, while it is kept nearby at Joint Base Andrews in suburban Maryland, costs $273,000 an hour to fly. The Air Force also sent a B-2 bomber from Missouri, a five-hour round trip, at $60,000 an hour. The Navy sent two F-18s from southern Virginia, but also two F-35s from California, a 10-hour round trip at a cost of $23,000 an hour each. It also sent the Blue Angels aerobatic team from Pensacola, Florida: six F-18s flying four-hour round trips, at $15,000 an hour each.

Trump nevertheless attempted to downplay the costs he has generated. “The cost of our great Salute to America tomorrow will be very little compared to what it is worth. We own the planes, we have the pilots, the airport is right next door (Andrews), all we need is the fuel. We own the tanks and all,” he said in a tweet he posted Wednesday.

Trump has been trying to stage a massive military parade ― of the style common in authoritarian regimes like Soviet Russia or North Korea ― since winning his election in November 2016. He tried to have tanks included in his inauguration parade, but was blocked by the Defense Department. His interest was stoked during a 2017 visit to the Bastille Day celebration in Paris, and he began to press for a Veterans Day parade last year. He abandoned the idea after the $92 million estimated cost was made public.

As a candidate and now as president, Trump has claimed a great admiration and affinity for the military ― a stark contrast to his own history with the armed forces. Trump avoided the draft during the Vietnam War with educational deferments and, ultimately, a medical exemption because of “bone spurs.” The ailment, though, did not appear to hinder his ability to play sports as a young man, and in later years, he said he could not remember which heel had had the problem.

In 1997, Trump told a radio show that the numerous women he slept with in the 1970s constituted his “personal Vietnam” because of the risks he faced catching sexually transmitted diseases. And just recently, he told ITV television that he did not join the military because he was “never a fan” of the Vietnam War and that no one at the time had ever heard of the place.

Trump’s 45-minute speech Thursday largely recited the histories of the various branches of the armed forces ― a performance that seemed to leave his audience, many of whom wore and carried campaign material, unimpressed. The address, nevertheless, likely pleased his White House staff, some of whom worried that he would launch into political attacks against Democrats and campaign for his own reelection. Trump has turned “official” White House events into virtual campaign rallies since taking office, but this one posed additional legal consequences because of the involvement of so many members of the military.

Trump did, however, manage one dubious boast about his presidency: “Our nation is stronger today than it ever was before. It is its strongest now.”