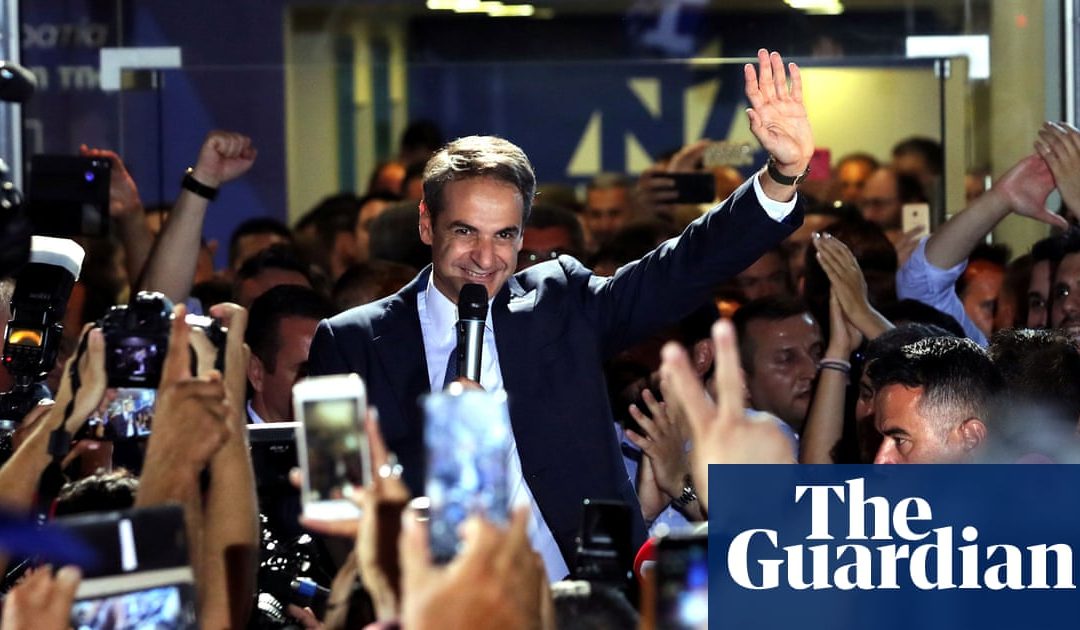 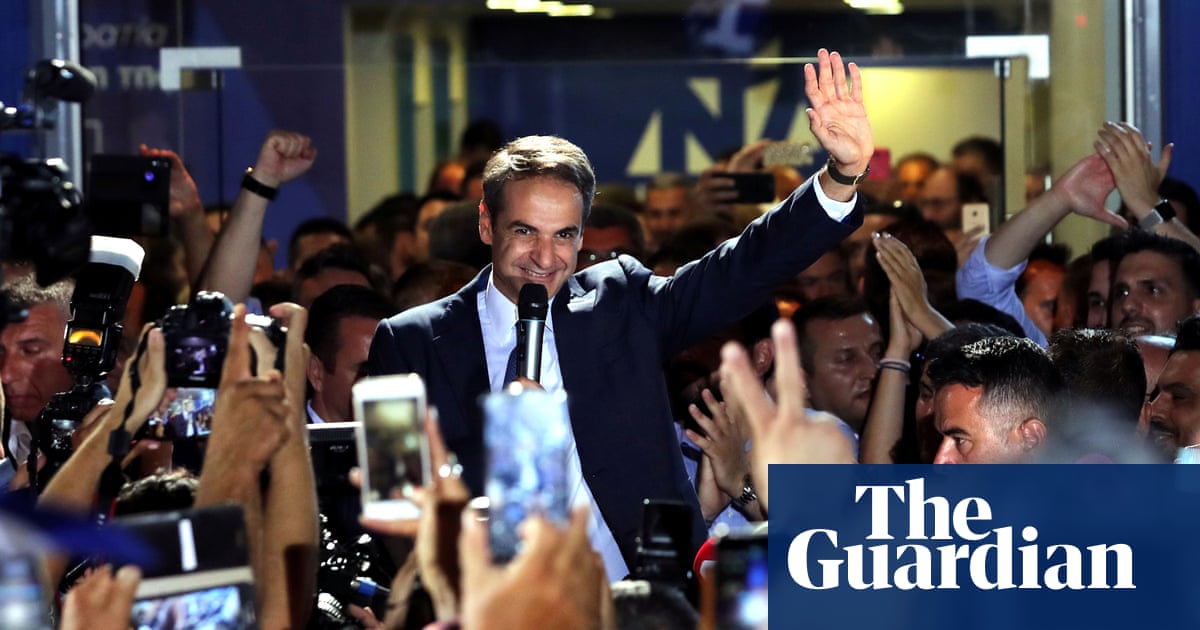 Voters in Greece have given Kyriakos Mitsotakis centre-right New Democracy party a resounding mandate to form a new government after it won by a landslide over the incumbent leftwing Syriza party, which has been in power since 2015.

As the outcome of Sundays general election became clear, the prime minister, Alexis Tsipras, conceded defeat, calling Mitsotakis to congratulate him on his victory. The official handover of power will take place on Monday.

With 91% of the vote counted, the countrys interior ministry said the conservatives had gained 39.7% compared with 31.5% for Syriza.

In his first address as the countrys new leader, the 51-year-old Harvard-educated former banker said he welcomed the result with a sense of modesty and respect seeing it as a victory for all, irrespective of political persuasion.

Society wants us to move forward united, he said as euphoric supporters gathered outside New Democracys headquarters. It wants growth, work, security and for Greece to become, as it deserves, strong again. Ill be prime minister of all Greeks. I will work to convince our compatriots who did not support us. We are too few to be divided and we have much to do together from today a difficult but beautiful battle lies ahead.

The result gives New Democracy an outright majority with 158 seats in the Greek parliament, more than double its current representation in the 300-seat house.

With the neo-fascist Golden Dawn party failing to cross the 3% threshold required to secure any seats, interior ministry officials described the outcome as conclusive. Previously Greeces third biggest political force, the anti-immigrant party had embodied the darkest days of the debt-stricken countrys descent into crisis. Senior members are on trial following the death of a prominent anti-fascist rapper and charges of running the party as a criminal organisation.

Mitsotakis, the son of a former prime minister, also received a congratulatory call from Turkeys president, Recep Tayyip Erdoan. Tensions between the two Nato rivals have been rising in recent months over conflicting claims to hydrocarbons off Cyprus.

New Democracy officials described the result as historic. Many called it a personal victory for Mitsotakis, a reformist who has been at pains to modernise and revamp one of Europes most conservative parties since being elevated to its helm in January 2016.

Credit has to go to him and his strategy of opening up and moving the party towards the centre, said Haris Theocharis, a newly elected MP and former head of public revenues. It is a result that comes with a lot of responsibility.

Acknowledging the party had sought to embrace the centre ground, Mitsotakis pledged he would endeavor to change the country for the hundreds of thousands of mostly young Greeks who in recent years had left in search of work. I wont ask you to take the road of return, he said. I ask you to have your gaze and heart turned towards Greece. From today, we will work to change the country that you were forced to leave.

Many of its MPs will be first-time politicians who were drawn to the partys pledge to re-energise the economy by attracting foreign investment and creating jobs after four and a half years of often rollercoaster leadership under Tsipras.

These new faces are the faces of renewal, said one of Mitsotakiss senior advisers. For the last two years, Kyriakos has spent every week somewhere in the country listening to peoples problems. He knows what they are.

Tsipras called the vote three months ahead of schedule after Syrizas staggering defeat in European parliament elections in May. New Democracy routed the leftists by 9.5 percentage points, a margin of victory not seen since European elections were first contested in Greece in 1981.

Syriza rallied on Sunday, doing much better than expected. I can assure the Greek people that from the benches of the opposition we will be present to protect the interests of people of toil and creativity, the leftist leader vowed, describing his partys loss as anything but a strategic defeat.

The election was billed as transformational: the winning party will form Greeces first post-bailout government after almost a decade of recession. Kept afloat by international rescue funds since 2010, the thrice-bailed-out nation has been forced to endure punishing austerity in return for remaining in the eurozone.

New Democracys revival has been linked to Mitsotakiss efforts to entice centrists and to the conservatives ability to siphon off votes from Golden Dawn by taking a tough stance on immigration and on an accord struck by Tsipras settling a long-running name row over Macedonia, Greeces neighbour to the north.

The poll was the first to take place at the height of summer since 1928 and there were worries that many would miss the vote, preferring to go to the beach or remain at home rather than traipse to polling stations in temperatures expected to reach 40C.

Twenty parties contested the race for seats in the 300-member parliament. On television shows on Sunday morning, analysts mused that the vote could be swung by hundreds of thousands of younger Greeks deciding to go to the beach or polling stations. Smaller parties, such as the ultra-nationalist Greek Solution and leftist MeRA25, headed by Yanis Varoufakis, the former finance minister, were targeting younger Greeks.

Voting once every four years is not enough for democracy, Varoufakis told reporters as he emerged from a polling station in a coastal area of southern Athens. Democracy belongs only to those who have the courage to defend it. Today, the only way to defend it is by voting on the basis of parties programmes and records. Congratulations to all those citizens who get off their sofas and vote.

Varoufakiss party appears to have fared well, gaining 3.4% of the vote and nine MPs in parliament.