Want to know what a Boris Johnson government would look like? I have just the book | John Harris 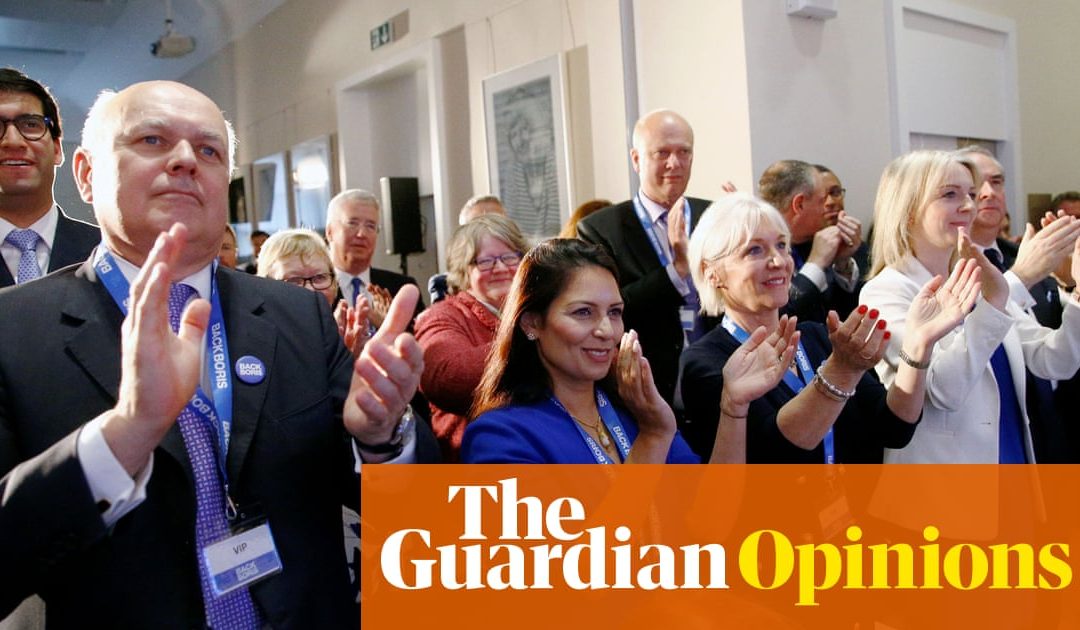 Among the would-be PMs backers are the authors of Britannia Unchained, and their vision of deregulated Britain is terrifying, says Guardian columnist John Harris 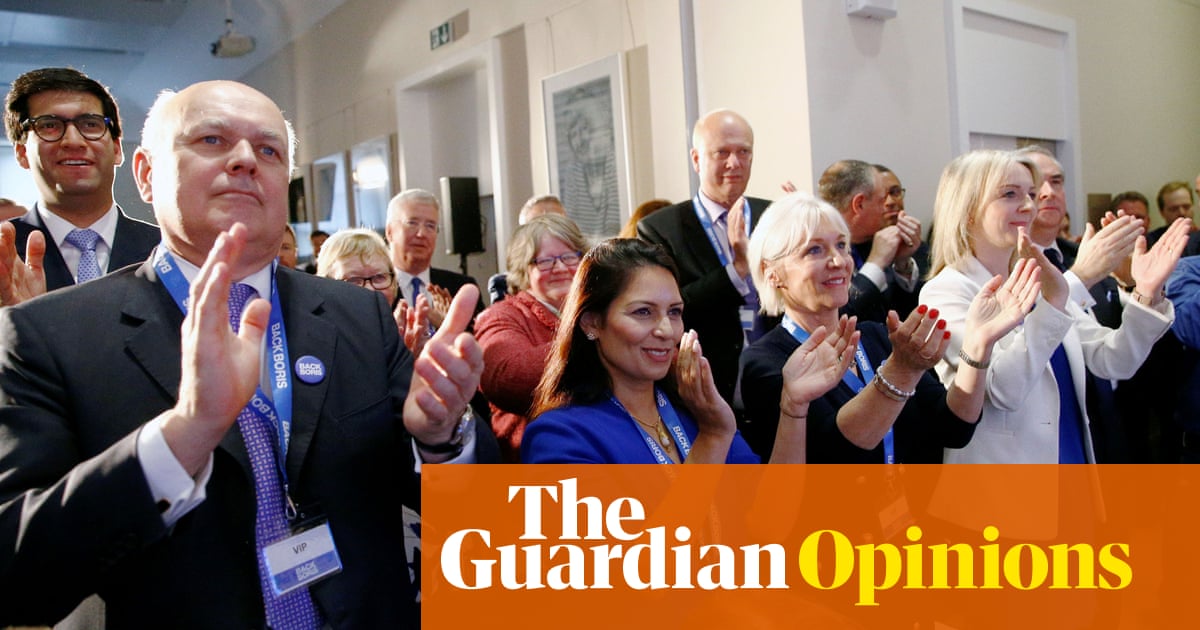 Seven years ago, a group of Conservative MPs who had taken their parliamentary seats in 2010 brought out a slim manifesto for the future of Britain titled Britannia Unchained. Kwasi Kwarteng, Priti Patel, Dominic Raab, Chris Skidmore and Liz Truss appeared to speak with one voice: that of unabashed Thatcherites, convinced that hacking back tax and regulation and fixating on the demands of business was as appropriate for the 21st-century UK as it supposedly had been for the crisis-plagued Britain of the 1970s.

Some of the text was so provocative that it read like trolling. The British are among the worst idlers in the world, read one passage. We work among the lowest hours, we retire early and our productivity is poor. Whereas Indian children aspire to be doctors or businessmen, the British are more interested in football and pop music. To even start to compete with the rising economies of India, China and Brazil, said the authors, we need to avenge the dependency culture and stop indulging in irrelevant debates about sharing the pie between manufacturing and services, the north and the south, women and men. They advised fellow Conservatives to double down on austerity, and maintain their faith in old-fashioned laissez-faire economics.

All five of the Britannia Unchained gang are now supporters of Boris Johnson. They may be wincing at his scattergun spending pledges, but they are presumably thrilled by his embrace of cutting corporation tax; what one report called a Trump-styled moratorium on all new regulations; and the surreal idea of turning at least six UK places including Belfast into free ports that would charge no taxes or tariffs. Of a piece, of course, was his brilliantly timed move last week, when news that obesity was now rivalling smoking as a cause of cancer coincided with his hostile manoeuvrings on the so-called sugar tax.

Among the most high-profile Tories at the forefront of Johnsons leadership campaign is Truss, the current chief secretary to the Treasury. In response to the sugar tax story, she tweeted: Taxes on treats hits those on lowest incomes. We should be #freetochoose. The apparent suggestion was that if the rich were to pay less tax, it was only right that the poor should get a few pence off their next soft drink, with the consequence incidental, of course that big corporations (such as Coca-Cola, linked to Johnson via one Will Walden, an adviser who works for a lobbying firm that represents it) would be able to once again load their output with as much bad stuff as before.

None of this was terribly surprising. In the recent past, Truss has bemoaned the tendency of people in positions of power to sound off about people drinking too much and eating too many doughnuts. If that holds out the prospect of a growing burden on the NHS, she appears to have that covered: calls for increased spending, it seems, may yet be offset by the wonders of technology, a subject that this self-styled disruptor-in-chief has attempted to make her own. In health, disruptive new entrepreneurs are revolutionising hospital treatment, she offered, back in January last year. Everyday goods like smart watches have the potential to transform public health. With real-time peer-to-peer information, like TripAdvisor, surely we can remove some of our bureaucracy?

Which brings us to something very interesting. If you want a sense of how the looming Johnson administration might deal with the ever-increasing questions hanging over Big Tech, Truss is a good person to watch. For the best part of two years, she has been making speeches warning any would-be interveners that such companies should be left alone. When Labour talked about digital monopolies profiting from everyones searches and shares, and said it might impose a windfall tax on them to fund public interest journalism, she jumped to the conclusion that it wanted to nationalise the internet. As she sees it, Uber is simply a company that is bringing choice and value to huge numbers of people, while Airbnb is making it easier for people to rent out rooms or to find a cheaper place to stay. This sounds less like intelligent politics than someone reading out adverts while sitting on the tube, but it reflects a belief that people who want to change the nature of the internet, and thereby imperil lifestyle freedom, are the enemies of liberty.

What Truss and her ilk dont seem to understand is that lots of trailblazing, decidedly libertarian tech people dont like these companies either, rightly seeing them as malignant concentrations of power antithetical to the internets original ethos (witness the droves of people working on blockchain technology, and aiming to foster decentralised alternatives to the established platforms). As with the corporations now at the heart of the modern food economy, the internets big players have been through their unregulated, disruptive phase, much as traditional industries went through their equivalent in the 19th century. And just as we now have to talk about diet and public health, so we are now in a period marked by these platforms obvious downsides: an array of damaging effects on society; and the fact that, true to capitalist form, the most powerful firms have hardened into monopolies, which tend to eat up any startups that pose a threat.

In the Britannia Unchained view of things, the only way to deal with these problems is to encourage a kind of competition that Big Techs power has long since squashed and to suggest that these imbalances demand action by governments is to embrace the thinking of the bureaucrat, a belief that neatly chimes with Brexit. The EU has been in the forefront of conversations about what to do about Uber, Amazon, Facebook, Google and all the rest. So have politicians and institutions in the US, as well as many Silicon Valley insiders who believe in the profit motive and the wonders of free trade as a matter of instinct. But some 21st-century Tories are so lost in the woods that their instinctive position is to scoff at any claim that all this activity is about protecting consumers and innovators, insisting instead that it is time to rush to the aid of the free market, even where the free market has long since ceased to exist.

Truss says she believes in a nation of Airbnb-ing, Deliveroo-eating, Uber-riding freedom fighters, but what she and many other Johnson supporters seem to be advocating is much less flash: leaving monopolies and oligopolies untroubled, in the service of our old friend, disaster capitalism. We all know what they have in mind. Come the autumn, Britain may well get a huge shock, and penury will beckon. The only way to avoid it, we will be told, will be to bin regulation, drastically lower taxes, and become tech, finance and the corporate food industrys offshore playground.

Then a terrifying future will open up: a few people creaming it in, while millions of ill, poor, eternally insecure people remain glued to their smartphones to either await their next casual shift in a fulfilment centre or spend whatever crumbs they are paid on the latest useless innovation. Such are the uplands of freedom offered by a party that seems to have lost what was left of its moral bearings, and resolved not to unchain us, but to imprison Britain in true-blue stupidity.

John Harris is a Guardian columnist