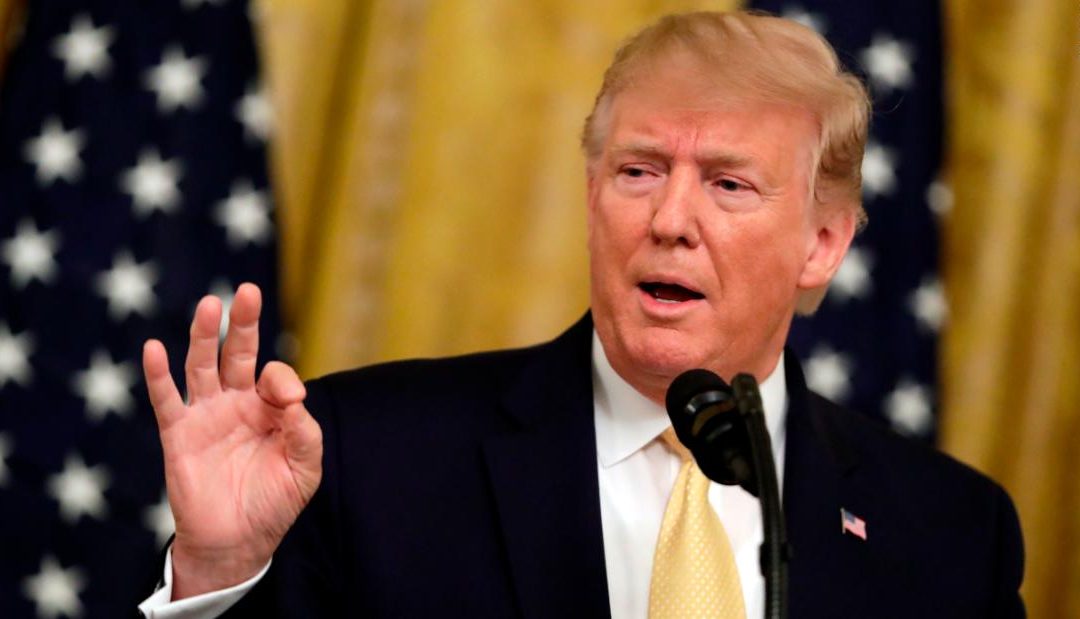 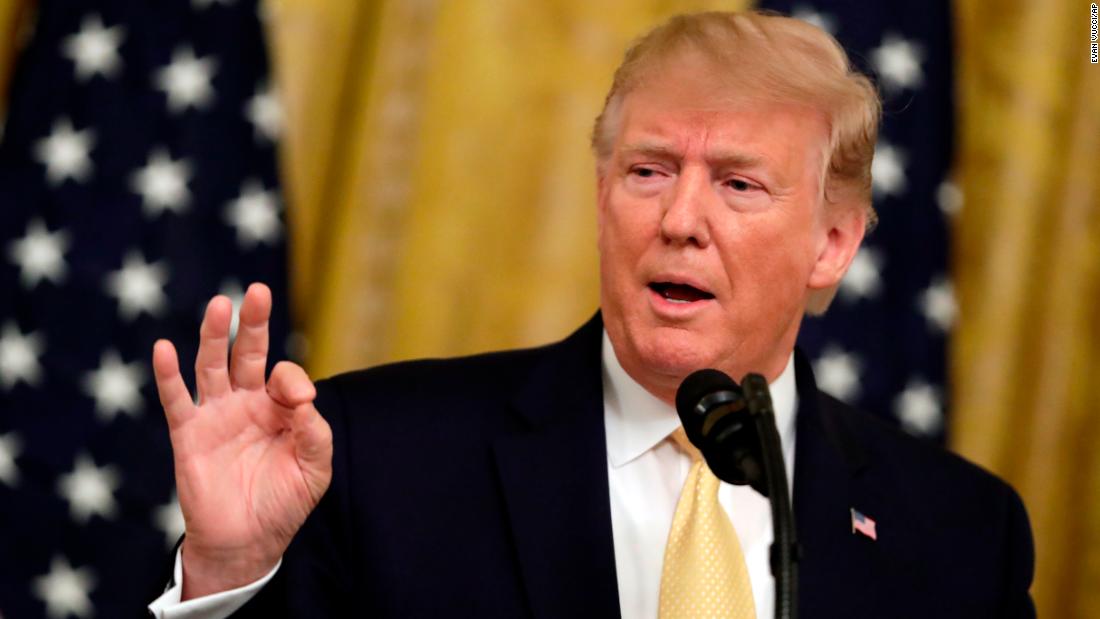 (CNN)During a wide-ranging, largely off the cuff speech during his “social media summit” Thursday, President Donald Trump made several misleading and downright false claims about social media companies, the census, the economy, crowd sizes and Democrats’ past positions on a border wall.

Trump spoke at length about what he falsely suggested was a deliberate attempt by social media companies to prevent him from gaining followers, alleging that “a lot of bad things are happening.”
Trump said it used to take him a mere “short number of days” to gain 100,000 new followers, but it now takes “10 times as long” even though, he claimed, his personal brand is “much hotter” than it was when he was gaining followers more quickly.
“People come up to me: ‘Sir, we want to follow you; they don’t let us on,'” Trump said. He added later: “I have millions of people, so many people I wouldn’t believe it, but I know that we’ve been blocked. People come up to me and they say, ‘Sir, I can’t get you. I can’t follow you.'”
Facts First: There is no evidence that Twitter or other social media companies have made it difficult for people to follow Trump.
We obviously can’t verify what certain people might have told Trump in private about following him on social media, but following him is not complicated: doing so is simply a matter of signing up for an account, searching his name and clicking a single button.
If Trump is not gaining followers as quickly as he used to, that’s because fewer people are now trying to follow him. (At the time of his speech, he had 61.9 million followers on Twitter. He had fewer than 13 million a week before his election and fewer than 23 million at the time of his inauguration, according to Factba.se, which tracks Trump-related data. )
Twitter did take followers away from Trump last year, but that was part of a broad purge of suspected fake accounts. The purge also removed followers from the accounts of many other famous people. Trump lost approximately 300,000 followers, far fewer than Barack Obama (more than 2 million) and the Dalai Lama (about 375,000), according to a New York Times count.
When Trump began accusing Twitter last year of malicious behavior over the purge, Twitter issued a statement saying “many prominent accounts have seen follower counts drop.” It explained that it had removed “fake accounts and those engaging in malicious behavior” to improve the health of the service.

Trump touted the low unemployment rate for women, saying: “Women, I think, Kellyanne (Conway), the best in 75 years — the best unemployment numbers in 75 years.”
Facts First: Trump exaggerated slightly. The women’s unemployment rate for June is 3.6%, a tick above the 3.4% in April and 3.5% in May. Those are excellent numbers, but it has been 66 years since the women’s rate has been this low, not 75. Prior to Trump’s presidency, the last time the rate fell to 3.6% was October 1953.

While arguing that he should be permitted to include a citizenship question in the 2020 US census, Trump said that the census survey can ask people about the number of beds and toilets they have but not about whether they are citizens.
“They go through houses, they go up, they ring doorbells, they talk to people. How many toilets do they have? How many desks do they have? How many beds? What’s their roof made of?” Trump said. “The only thing we can’t ask is ‘Are you a citizen of the United States?'”
Facts First: Trump is wrongly suggesting that the decennial census asks households about the number of toilets in a house. He could be referring to supplemental surveys from the Census Bureau, which do ask questions about living conditions of a small sample of households. If that’s the case, then he’s still wrong, since these surveys do ask questions of citizenship.
The decennial census — which counts the US population every ten years and is required by the Constitution — was last administered in 2010. That census did not include questions on plumbing, bedrooms, and desks. Instead, the decennial census focuses on questions like age and race and number of occupants in a household.
Trump could be referring to other surveys sent out from the Census Bureau such as the American Community Survey, which is sent to just a fraction of households, about 3.54 million addresses every year.
One of the main functions of the ACS, according the Census Bureau, is to gather “data that help determine how more than $675 billion in federal and state funds are distributed each year.” The 2019 version of this survey includes questions on the education levels and employment status of those living on the property, as well as the property’s computer access, number of rooms, if there is access to hot and cold water and much more.
But the ACS also includes questions on citizenship. “Is this person a citizen of the United States?” this year’s version asks. So, Trump is wrong to suggest that while you can ask these more specific questions on living conditions you cannot ask a citizenship status question.
On the specifics, Trump’s argument lacks facts, and on his larger point he’s flatly wrong: the decennial census did not ask about number of bathrooms, bedrooms, and so on.

Trump touted a new record set by the Dow Jones Industrial Average, then made a claim about how much 401(k) retirement plans have increased.
“I don’t know if you know but we just hit 27,000 on the Dow. …The highest in history, for those of you that like the stock market, but the stock market means jobs. I view it as jobs, and I view it as 401(k)s. … And people with 401(k)s, they’re up 72% and 67%, and the wife or the husband, whoever’s responsible, the other one says ‘you’re a genius, you’re a great financial investor, darling you’re up 77% this year.'”
Facts First: These percentages overstate gains in US stock markets.
It is possible that some people have 401(k)s that are up 77% on the year or since Trump was elected, but stock markets themselves are not up that much. At the close of trading on the day Trump spoke, the Dow Jones Industrial Average was up by 16%, the S&P 500 Index by 20%, the Nasdaq by 24%.
The gains are greater if you go back to Trump’s election day, as the President often does: 48% for the Dow, 40% for the S&P, 58% for the Nasdaq. Still, none of them approaches 77%.

Trump claimed that there were thousands of people outside his June campaign kickoff rally in Orlando in addition to the large crowd inside.
“We had sort of an opening rally in Orlando, Florida. We had 109,000, maybe more, wanting to come. We were doing as much as we could to keep people not from coming. We had a 21,000-seat stadium, and then with the basketball court, it held many more than that, it was packed. And we had a similar number outside.”
Facts First: There were nowhere close to 21,000 people outside the rally as Trump was speaking. And the arena had a capacity of 20,000 that night, not “many more than” 21,000.
The Orlando Sentinel, which debunked a previous version of Trump’s claim about the crowd “outside,” reported that the overflow area outside the Amway Center was “virtually empty” as Trump spoke, with only “a few dozen people in the holding area.” The paper reported: “About an hour before the President’s speech, the long lines around the Amway were gone and people could easily walk into the event right up to the start of the rally.”
The city of Orlando, which owns the arena, issued an official crowd count of 19,792, just shy of the 20,000 a city spokesperson said would have been let in, the Sentinel reported.
Trump has previously claimed, also falsely, that tens of thousands of people were stuck outside various other campaign events, many of which have been debunked previously.
Trump then took a shot at the number of people in the audience when Joe Biden announced his candidacy earlier this year.

“You look at Biden. They say he had 600 people. That wasn’t 600, that was 150 people. That was 150.”
Facts First: Independent observers reported that Joe Biden did indeed have 600 people at his first public event after announcing his candidacy for the Democratic presidential nomination.
The Atlantic said that journalists occupied 100 of the 600 spots at a union hall in Pittsburgh, but that is still 500 non-journalists, not 150.

Democrats and the border wall

Trump accused the Democrats of hypocrisy for their opposition to his proposed border wall.
“For instance, on the wall: Chuck Schumer was totally in favor of a wall, right Liz (Cheney)? Totally in favor. Everybody: Hillary, everybody. They were all in favor of a wall just a few years ago.”
Facts First: Some Democrats, not all, voted in 2006 to approve a fence that Trump himself said was much different than the wall he wanted.
It is not true that “everybody” in the Democratic Party supported even this fencing. House Speaker Nancy Pelosi voted against. In the Senate, 26 Democrats (including Schumer and Clinton) voted yes, 17 voted no.
The law, called the Secure Fence Act, was to authorize 700 miles of fencing on the Mexican border. Trump himself said during the 2016 campaign that this fencing was not comparable to the giant concrete wall he was proposing: “It was such a little wall, it was such a nothing wall,” he told Fox News.
This story has been updated.