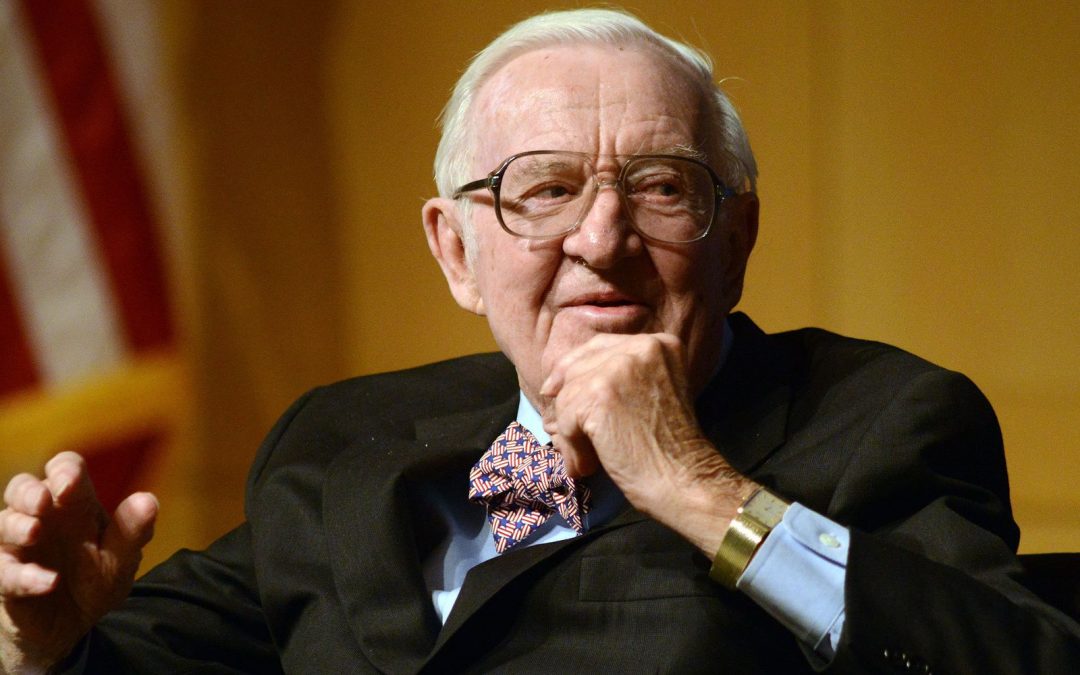 Former Supreme Court Justice John Paul Stevens, who led the court’s effort to provide legal protections to prisoners held at the Guantanamo Bay Naval Base in Cuba, died in Florida on Tuesday. He was 99 years old.

“On behalf of the Court and retired Justices, I am saddened to report that our colleague Justice John Paul Stevens has passed away,” Chief Justice John Roberts said in a statement. “A son of the Midwest heartland and a veteran of World War II, Justice Stevens devoted his long life to public service, including 35 years on the Supreme Court. He brought to our bench an inimitable blend of kindness, humility, wisdom, and independence. His unrelenting commitment to justice has left us a better nation.”

Raised to the Supreme Court in 1975 by a Republican president, Stevens became an outspoken critic of President George W. Bush’s efforts to create a legal black hole at Guantanamo. After the Sept. 11, 2001, terror attacks, the Bush administration argued that enemy combatants held at the off-shore prison were not entitled to access to U.S. courts because they were not U.S. citizens and they were not being held on American soil.

Stevens disagreed. In the 2004 case Rasul v. Bush, he wrote the majority opinion ruling that prisoners at Guantanamo had the right to challenge the legality of their imprisonment before a U.S. court.

Two years later, Stevens wrote the majority opinion in Hamdan v. Rumsfeld, which ruled that the military commission system set up under Bush violated U.S. and international law. Prisoners at Guantanamo, Stevens held, were protected by a provision in the Geneva Conventions entitling them to “a regularly constituted court affording all the judicial guarantees which are recognized as indispensable by civilized people.” Stevens rejected the Bush administration’s argument that Congress had given the president the authority to convene the military tribunals when it passed an Authorization for Use of Military Force following the Sept. 11 attacks.

Even after he retired in 2010, Stevens remained a vocal critic of the U.S. government’s policy of indefinite detention without charge at Guantanamo. In 2015, he argued that the government should pay reparations to those detainees who had been approved for transfer out of the prison but remained locked up. He compared the reparations proposal to the government’s eventual decision to compensate and apologize to the Japanese Americans who were incarcerated en masse during World War II.

But those Supreme Court victories have proved to be more theoretical than practical. Over the years, the U.S. Court of Appeals for the D.C. Circuit has repeatedly sided with the government against the Guantanamo detainees. And despite a revamping after Hamdan v. Rumsfeld, the military commission system remains dysfunctional.

Guantanamo detention was not the only issue on which the Gerald Ford nominee sided with the court’s liberal wing. But Stevens claimed that he never really considered himself to be left-leaning. Instead, he insisted that the Supreme Court became more conservative during his nearly 35 years there.

“I think as part of my general politics, I’m pretty darn conservative,” he told The New York Times in 2007.

Nonetheless, it’s true that Stevens moved left on several divisive issues, including capital punishment and affirmative action. In 1976, he voted to uphold the death penalty as a constitutional punishment ― something he later said he regretted. In 1978, Stevens joined with the majority in Regents of the University of California v. Bakke to rule that the use of racial quotas in a medical school admissions program was unconstitutional. But he joined the majority in the 2003 ruling Grutter v. Bollinger, which upheld the affirmative action program at the University of Michigan Law School.

Stevens also wrote a strongly worded dissent in Bush v. Gore, the 2000 case that halted a recount in Florida and ultimately handed the presidency to George W. Bush. That decision would undermine confidence in the Supreme Court, Stevens predicted at the time.

“Time will one day heal the wound to that confidence that will be inflicted by today’s decision,” he wrote. “One thing, however, is certain. Although we may never know with complete certainty the identity of the winner of this year’s Presidential election, the identity of the loser is perfectly clear. It is the Nation’s confidence in the judge as an impartial guardian of the rule of law.”

During his final year on the court in 2010, Stevens wrote a lengthy dissenting opinion in Citizens United v. Federal Election Commission, the landmark decision that allowed corporations and unions to spend unlimited sums of money in elections. The majority ruled that limits on political spending infringed on the organizations’ First Amendment rights. Stevens responded that there’s a meaningful distinction between corporations and human beings:

In the context of election to public office, the distinction between corporate and human speakers is significant. Although they make enormous contributions to our society, corporations are not actually members of it. They cannot vote or run for office. Because they may be managed and controlled by nonresidents, their interests may conflict in fundamental respects with the interests of eligible voters. The financial resources, legal structure, and instrumental orientation of corporations raise legitimate concerns about their role in the electoral process. Our lawmakers have a compelling constitutional basis, if not also a democratic duty, to take measures designed to guard against the potentially deleterious effects of corporate spending in local and national races.

Stevens was born in 1920 to a wealthy family in the Hyde Park neighborhood of Chicago. His father, grandfather and uncle were all arrested on embezzlement charges in 1933. His uncle killed himself before a trial, and his father was convicted and then acquitted on an appeal to the Illinois Supreme Court. Stevens would later say that his father’s wrongful conviction taught him that the legal system can make mistakes ― something he would keep in mind as a judge.

“It was an example of the system not working properly. And so I think every judge has to keep in mind the possibility that the system has not worked correctly in a particular case,” he said in a “60 Minutes” interview the year he retired.

In 1941, Stevens graduated Phi Beta Kappa from the University of Chicago, where he played tennis ― he continued to play into his 90s ― and worked on the school’s newspaper, The Daily Maroon. He then joined the Navy, serving as a codebreaker and earning a Bronze Star. After the war, he attended Northwestern Law School, where he graduated with the highest GPA in the law school’s history at that time. He clerked for Supreme Court Justice Wiley Rutledge for a year.

Stevens then returned to Chicago to practice antitrust law. He would also teach law at Northwestern and the University of Chicago before President Richard Nixon nominated him to the U.S. Court of Appeals for the 7th Circuit in 1970. Stevens served on that court until 1975, when Ford picked him for the Supreme Court.

Ford appointed Stevens at the recommendation of his attorney general, Edward Levi, a former University of Chicago president who knew of Stevens’ evenhanded reputation. Ford sought someone who could be confirmed by a Democratic-controlled Senate. He announced he was nominating Stevens after meeting him only once, at a White House dinner where the two men did not discuss Stevens’ judicial philosophy. Three decades later, Ford said he was willing to let historians judge his entire presidency on his selection of Stevens.

The judge was confirmed to the high court by a Senate vote of 98-0.

On the court, Stevens had a reputation for being a collegial, courteous consensus-builder ― and for wearing a bowtie. Instead of interrupting lawyers during oral argument to ask questions, as is the custom among other justices, Stevens would say, “May I ask you a question?” A former clerk for Stevens told The New Yorker in 2010 that Stevens often waited until his colleagues had asked questions to see how they were approaching a case and who might be the swing votes in the case. He was frequently described as a “judge’s judge.”

After retiring from the Supreme Court at age 90, Stevens kept an active schedule, appearing frequently in public and authoring several books. In one of those books, he proposed six new amendments to the Constitution involving such issues as gun rights, campaign finance, the death penalty and gerrymandering. In 2014, he suggested adding five words to the Second Amendment so that it would say, “A well regulated Militia, being necessary to the security of a free State, the right of the people to keep and bear Arms when serving in the Militia shall not be infringed.”

Stevens is survived by two daughters and nine grandchildren.

This is a developing story. Please check back for updates.