From Trump to Johnson, nationalists are on the rise backed by billionaire oligarchs | George Monbiot 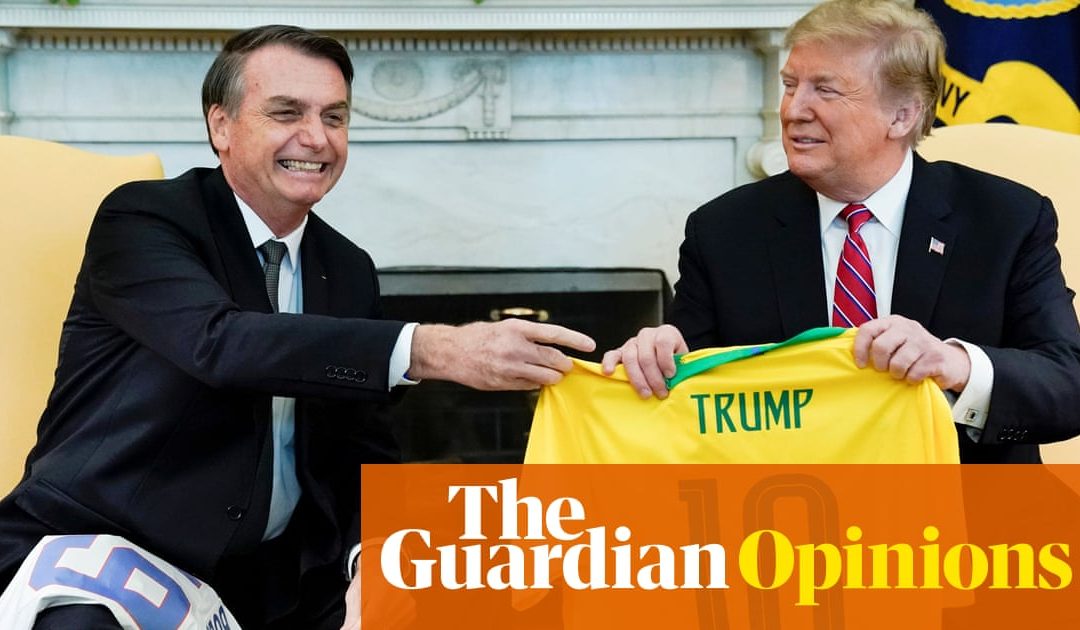 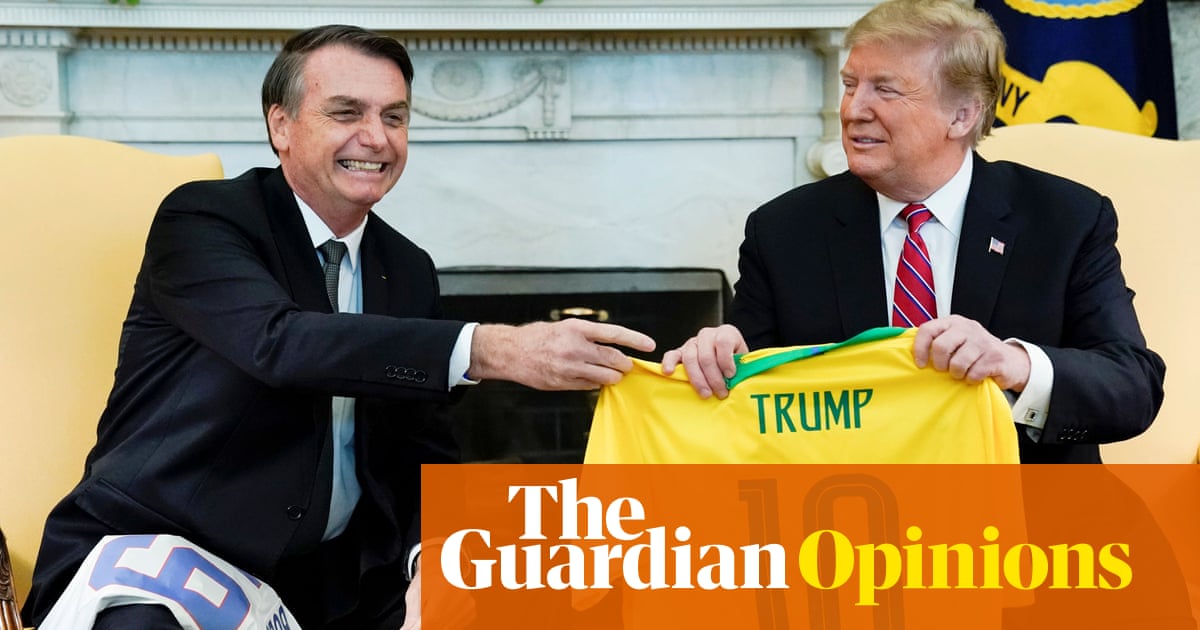 Seven years ago the impressionist Rory Bremner complained that politicians had become so boring that few of them were worth mimicking: Theyre quite homogenous and dull these days Its as if character is seen as a liability. Today his profession has the opposite problem: however extreme satire becomes, it struggles to keep pace with reality. The political sphere, so dull and grey a few years ago, is now populated by preposterous exhibitionists.

This trend is not confined to the UK everywhere the killer clowns are taking over. Boris Johnson, Nigel Farage, Donald Trump, Narendra Modi, Jair Bolsonaro, Scott Morrison, Rodrigo Duterte, Matteo Salvini, Recep Tayyip Erdoan, Viktor Orbn and a host of other ludicrous strongmen or weakmen, as they so often turn out to be dominate nations that would once have laughed them off stage. The question is why? Why are the technocrats who held sway almost everywhere a few years ago giving way to extravagant buffoons?

Social media, an incubator of absurdity, is certainly part of the story. But while there has been plenty of good work investigating the means, there has been surprisingly little thinking about the ends. Why are the ultra-rich, who until recently used their money and newspapers to promote charisma-free politicians, now funding this circus? Why would capital wish to be represented by middle managers one moment and jesters the next?

The reason, I believe, is that the nature of capitalism has changed. The dominant force of the 1990s and early 2000s corporate power demanded technocratic government. It wanted people who could simultaneously run a competent, secure state and protect profits from democratic change. In 2012, when Bremner made his complaint, power was already shifting to a different place, but politics had not caught up.

The policies that were supposed to promote enterprise slashing taxes for the rich, ripping down public protections, destroying trade unions instead stimulated a powerful spiral of patrimonial wealth accumulation. The largest fortunes are now made not through entrepreneurial brilliance but through inheritance, monopoly and rent-seeking: securing exclusive control of crucial assets such as land and buildings privatised utilities and intellectual property, and assembling service monopolies such as trading hubs, software and social media platforms, then charging user fees far higher than the costs of production and delivery. In Russia, people who enrich themselves this way are called oligarchs. But this is a global phenomenon. Today corporate power is overlain by and mutating into oligarchic power.

What the oligarchs want is not the same as what the old corporations wanted. In the words of their favoured theorist, Steve Bannon, they seek the deconstruction of the administrative state. Chaos is the profit multiplier for the disaster capitalism on which the new billionaires thrive. Every rupture is used to seize more of the assets on which our lives depend. The chaos of an undeliverable Brexit, the repeated meltdowns and shutdowns of government under Trump: these are the kind of deconstructions Bannon foresaw. As institutions, rules and democratic oversight implode, the oligarchs extend their wealth and power at our expense.

The killer clowns offer the oligarchs something else too: distraction and deflection. While the kleptocrats fleece us, we are urged to look elsewhere. We are mesmerised by buffoons who encourage us to channel the anger that should be reserved for billionaires towards immigrants, women, Jews, Muslims, people of colour and other imaginary enemies and customary scapegoats. Just as it was in the 1930s, the new demagoguery is a con, a revolt against the impacts of capital, financed by capitalists.

The oligarchs interests always lie offshore: in tax havens and secrecy regimes. Paradoxically, these interests are best promoted by nationalists and nativists. The politicians who most loudly proclaim their patriotism and defence of sovereignty are always the first to sell their nations down the river. It is no coincidence that most of the newspapers promoting the nativist agenda, whipping up hatred against immigrants and thundering about sovereignty, are owned by billionaire tax exiles, living offshore.

As economic life has been offshored, so has political life. The political rules that are supposed to prevent foreign money from funding domestic politics have collapsed. The main beneficiaries are the self-proclaimed defenders of sovereignty who rise to power with the help of social media ads bought by persons unknown, and thinktanks and lobbyists that refuse to reveal their funders. A recent essay by the academics Reijer Hendrikse and Rodrigo Fernandez argues that offshore finance involves the rampant unbundling and commercialisation of state sovereignty and the shifting of power into a secretive, extraterritorial legal space, beyond the control of any state. In this offshore world, they contend, financialised and hypermobile global capital effectively is the state.

Todays billionaires are the real citizens of nowhere. They fantasise, like the plutocrats in Ayn Rands terrible novel Atlas Shrugged, about further escape. Look at the seasteading venture funded by PayPals founder, Peter Thiel, that sought to build artificial islands in the middle of the ocean, whose citizens could enact a libertarian fantasy of escape from the state, its laws, regulations and taxes, and from organised labour. Scarcely a month goes by without a billionaire raising the prospect of leaving the Earth altogether, and colonising space pods or other planets.

Those whose identity is offshore seek only to travel farther offshore. To them, the nation state is both facilitator and encumbrance, source of wealth and imposer of tax, pool of cheap labour and seething mass of ungrateful plebs, from whom they must flee, leaving the wretched earthlings to their well-deserved fate.

Defending ourselves from oligarchy means taxing it to oblivion. Its easy to get hooked up on discussions about what tax level maximises the generation of revenue. There are endless arguments about the Laffer curve, which purports to show where this level lies. But these discussions overlook something crucial: raising revenue is only one of the purposes of tax. Another is breaking the spiral of patrimonial wealth accumulation.

Breaking this spiral is a democratic necessity: otherwise the oligarchs, as we have seen, come to dominate national and international life. The spiral does not stop by itself: only government action can do it. This is one of the reasons why, during the 1940s, the top rate of income tax in the US rose to 94%, and in the UK to 98%. A fair society requires periodic corrections on this scale. But these days the steepest taxes would be better aimed at accumulated unearned wealth.

Of course, the offshore world the billionaires have created makes such bold policies extremely difficult: this, after all, is one of its purposes. But at least we know what the aim should be, and can begin to see the scale of the challenge. To fight something, first we need to understand it.