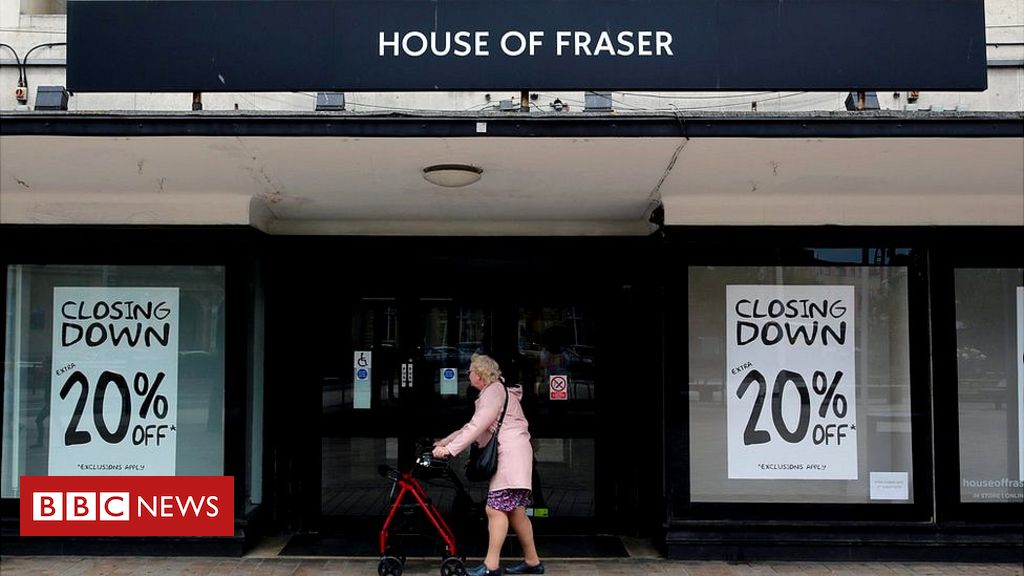 Sports Direct says it regrets rescuing House of Fraser in its much-delayed results, which revealed a €674m (£605m) tax bill from Belgium authorities.

The firm, which bought the department store out of administration a year ago, said: “If we had the gift of hindsight we might have made a different decision in August 2018.”

It described problems at House of Fraser as “nothing short of terminal”.

It added it was in talks with Belgium officials to resolve the tax bill.

The full-year results had been due to be published on 15 July but were delayed until 26 July, in part, because of uncertainty over the future trading performance of House of Fraser.

Those results had been expected to be published on Friday morning, but were subject to continuous delays throughout the day.

It has now emerged that Sports Direct, which is majority-owned and run by billionaire Mike Ashley, was hit by the tax bill by Belgian authorities on 25 July.

The company said the request for back taxes is linked to the way its goods are moved throughout the European Union and are taxed in Belgium.

Meanwhile, it also said that its chief financial officer of two years, Jon Kempster, is stepping down and will be succeeded by his deputy, Chris Wootton.

Commenting on House of Fraser, Neil Wilson, chief market analyst at Markets.com, said: “It’s a House of horrors, more like.”

He said Sports Direct had “every reason to regret buying House of Fraser now”.

“It’s such a shame as there were such high hopes,” he added.

Mr Ashley had vowed to turn House of Fraser into the “Harrods of the High Street” when he bought the department store chain out of administration for £90m last August.

However, on Friday he said: “In the short-term you can’t justify it. It’s like buying a broken down car at the roadside – you have to get it to the garage to fix it.”

But he said: “Long-term, we’d like to think we are hopeful of where we are going.”

With the benefit of hindsight, buying House of Fraser looks to Mike Ashley like buying a millstone and tying it around his own neck.

He paid £90m to the administrators and has seen his Sports Direct profits reduced by £51m since then. That’s been the cost of keeping House of Fraser going.

Now a cull of the stores is about to start. There are still 54. Not many have gone while he tested which ones had a future.

Some carried on losing money even after he had bullied the landlords into charging zero rent.

Mr Ashley warned that there is going to be “a lot of store closures” in the coming months, with smaller outlets in smaller towns most at risk.

When I asked him if that meant most House of Fraser stores would be shut down, he answered “no” but it is clear that thousands of jobs could be in danger.

Before House of Fraser went into administration last year – it was planning to shut 31 of its 59 stores. Sports Direct said it could close some stores – but didn’t say how many.

It said: “There are still a number of stores which are currently paying zero rent and that are still unprofitable, and unfortunately this is not sustainable.

“We are continuing to review the longer-term portfolio and would expect the number of retained stores to reduce in the next 12 months.”

Sports Direct said that it is working hard to turn House of Fraser around, but said “it will not be easy”.

“On a scale out of five, with one being very bad and five being very good, House of Fraser is a one,” the company added.

However, taking out House of Fraser, Sports Direct’s income rose by 10.9%.