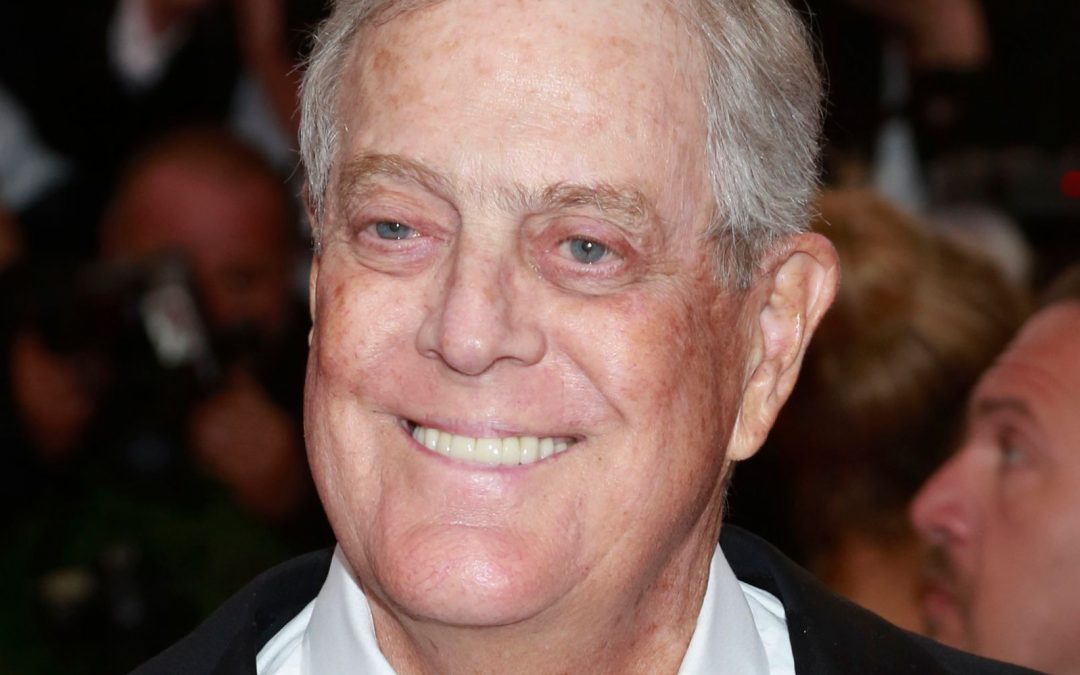 David Koch, the billionaire industrialist who, along with his brother Charles, helped fund a vast conservative and libertarian political operation, died on Friday, according to the journalist Jane Mayer, citing family sources. CBS confirmed his death. He was 79 years old.

Their political activism began in the 1970s as big business began a concerted effort to reassert political power after decades of predominantly New Deal Democratic Party governance. But the Koch brothers did not fully emerge as public political figures until they helped fund and organize the opposition to President Barack Obama.

In doing so, the brothers came to be seen by political liberals and leftists as symbols of inequality and money in politics during America’s second Gilded Age.

David Koch was one of four sons born to Mary Koch and oil industry tycoon Fred Koch in Wichita, Kansas. The four brothers ― Frederick, Charles, and twins David and Bill ― inherited control of Wood River Oil and Refining Company, their father’s oil business, after his death in 1967 and promptly renamed it Koch Industries. Charles initially took charge of the firm, but David joined him in 1970.

The two brothers built the company into one of the most profitable and successful corporations in the United States. They became two of the richest Americans in the process. David Koch died with a net worth of $58.7 billion.﻿

David Koch did not just inherit the family business, but the family politics as well. His father was one of the founding members of the far-right John Birch Society in 1958. Fred Koch’s conservative politics came partly from his time building oil refineries for Joseph Stalin’s communist government in the U.S.S.R. in the 1930s. (The elder Koch also built oil refining infrastructure for Adolf Hitler’s Nazi regime in Germany during this period.) David would later say that his father “was a very conservative Republican and was not a fan of big government.”

Fred Koch “was constantly speaking to us children about what was wrong with government and government policy,” David Koch told journalist Brian Doherty for his history of the U.S. libertarian movement. “It’s something I grew up with ― a fundamental point of view that big government was bad, and impositions of government controls on our lives and economic fortunes was not good.”

Both and David and Charles Koch took these beliefs to heart and, as they built their father’s business into an empire, invested their increasing wealth heavily into a political movement opposed to government spending and programs.

As the more extroverted of the two siblings, David Koch took on a public role in 1980 as the running mate to Libertarian Party presidential candidate Ed Clark. Koch funded the campaign with $500,000 of his own money. The Clark-Koch ticket won just 1.1 percent of the vote on a platform of ending Social Security, welfare, minimum wage and labor laws, corporate taxes, and a host of government agencies including the FBI, CIA, Department of Energy, Securities and Exchange Commission and Occupational Health and Safety Administration, among others.

As David and Charles Koch built their political empire, they fought their other brothers for control of the family business. Frederick Koch, the eldest brother, and Bill Koch, David’s twin, sued their siblings in 1983, ultimately settling for $1.1 billion. This lawsuit left David and Charles Koch the sole family owners of the business.

Over the next two decades, their oil, chemical and agricultural products company would rack up nearly $400 million in fines from the government for violating environmental and workplace safety laws.

While Charles Koch remained in Wichita, Kansas, to head Koch Industries, David Koch lived in New York City. The wealthiest resident of Manhattan, he became one of New York’s most prominent philanthropists and contributed heavily to the arts ― with donations to the Metropolitan Museum of Art and the New York State Theater at the Lincoln Center, which is now named the David H. Koch Theater.

David Koch was diagnosed with prostate cancer in 1992. Afterward, he gave hundreds of millions of dollars to New York-area hospitals and cancer research centers, many of which now bear his name. While his cancer went into remission, it returned more than once over the course of his life.

In 1996, he married Julia Flesher, of Little Rock, Arkansas, then a 27-year-old assistant to the dress designer Adolpho and a socialite on the Upper East Side. He is survived by his wife and his three children, Mary, David Jr. and John.

Koch’s rise to national political prominence did not really begin until the late 2000s. In 2004, an internal tug-of-war within Citizens for a Sound Economy split the group into two. Koch took his half of the organization and started the conservative nonprofit Americans for Prosperity.

After Barack Obama won the presidency in 2008, Americans for Prosperity and the Koch brothers emerged as the main funders of the opposition. They helped finance the tea party protests that engulfed Obama’s first term. David Koch echoed his father’s conspiratorial Birch Society conservatism when he said that Obama was a “hardcore socialist” who was “pretending to be something other than that.”

The Koch brothers’ contributions to colleges and universities across the United States also perpetuated their political mission. They gave hundreds of millions of dollars to schools for classes that promoted free-market capitalism or hired researchers and professors the Kochs approved of for their politics or research.

While David Koch claimed to oppose military interventions like the Iraq War and support gay rights and women’s access to abortion, his money and political organizing largely benefited politicians who felt otherwise. Free-market capitalism was his main political goal. By the end of his life, he had helped push the Republican Party closer to his goals through the sheer power of his wealth and advocacy.