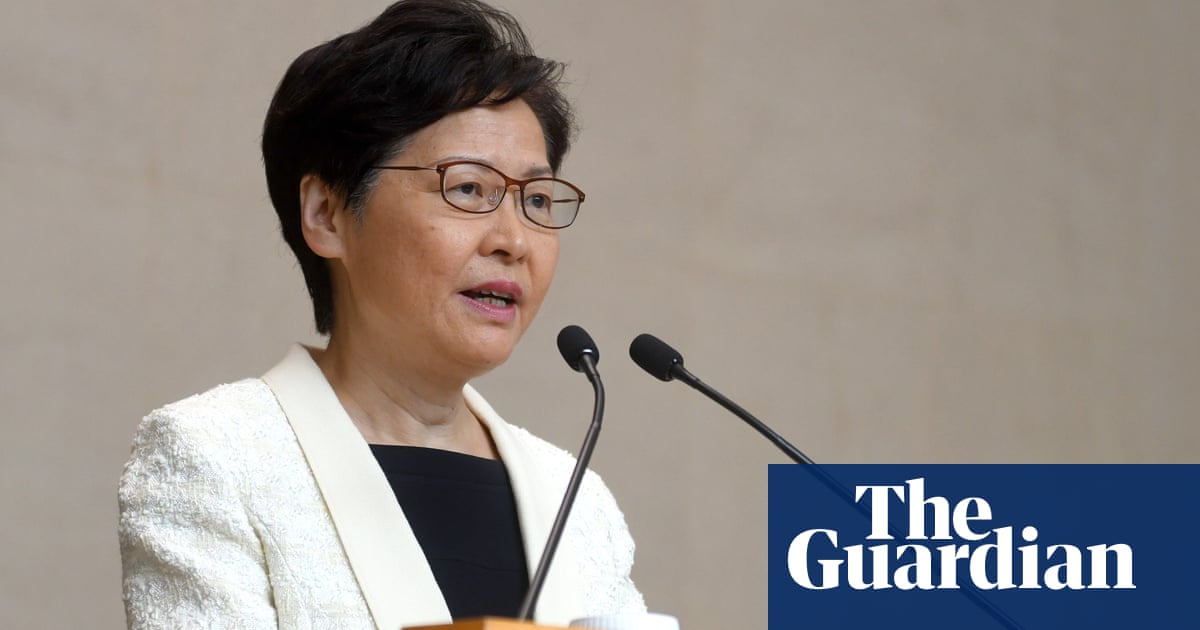 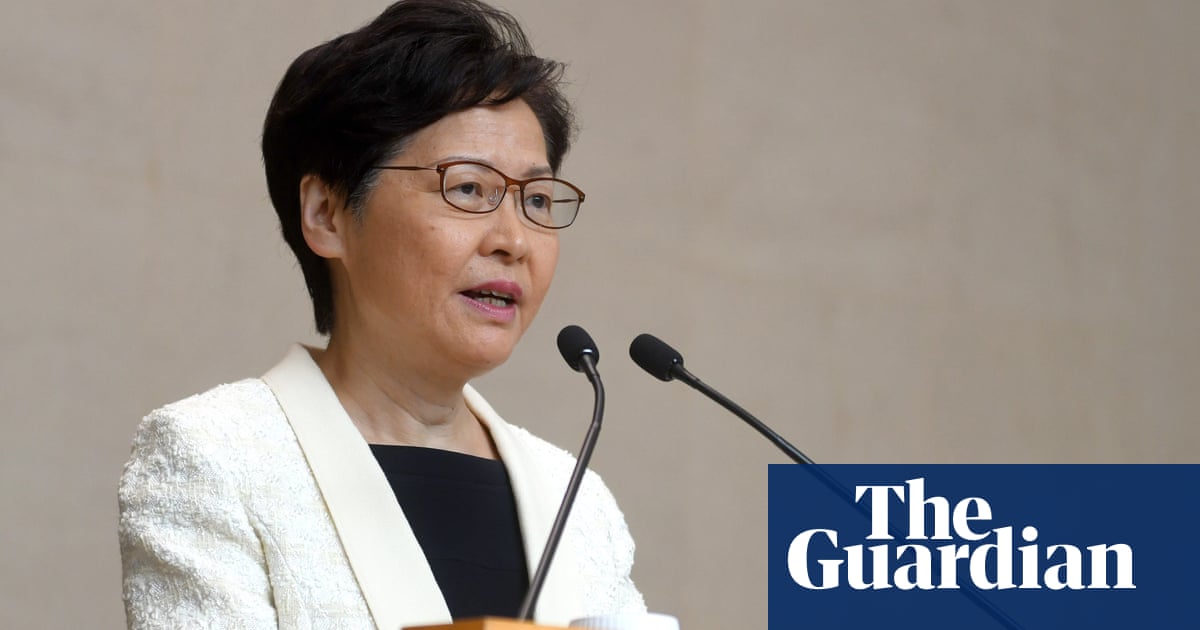 Hong Kongs leader, Carrie Lam, has said her government will formally withdraw an extradition bill that has ignited months of protests and plunged the territory into its biggest political crisis in decades.

In a five-minute televised address on Wednesday, Lam said her government would formally withdraw the controversial bill to fully allay public concerns.

The bill, which would have allowed the extradition of suspects to China to be tried under the mainlands opaque judicial system, prompted the start of mass protests in June that have led to increasingly violent confrontations with police and the arrest of more than 1,000 people.

Our citizens, police and reporters have been injured during violent incidents, Lam said. There have been chaotic scenes at the airport and [mass transit railway] stations; roads and tunnels have been suddenly blocked.

For many people, Hong Kong has become an unfamiliar place.

Lam shelved the bill in June, and in July again insisted it was dead after weeks of protest from demonstrators who argued it could be revived if it was not formally withdrawn.

With Wednesdays announcement, Lam has now conceded to one of five key demands of the demonstrators. However, the chief executive did not respond to protesters other demands, which include an independent inquiry into police behaviour, amnesty for those arrested, and democratic reforms to give Hong Kong residents universal suffrage.

Lam said she did not believe the government should establish an inquiry to look into police behaviour, deferring to an existing police watchdog agency, the Independent Police Complaints Council (IPCC). Lam said she would be adding two new members to the council.

Instead, Lam proposed four actions to help society move forward, including pledges to follow up recommendations from the IPCC and set up a platform for dialogue, inviting community leaders and experts to advise the government on social issues.

After more than two months of social unrest, it is obvious to many that discontentment extends far beyond the bill, she said. Lets replace conflicts with conversations.

Lams announcement, which marks a volte-face after months of vowing not to back down to the protesters, comes less than a month before China celebrates its national day on 1 October, the 70th anniversary of the founding of the Peoples Republic of China.

Response to the withdrawal was muted in mainland China. On the microblog Weibo, news of the withdrawal appeared to be censored and there were few reports of the news in Chinese state media.

She has to do something otherwise its going to be ugly, said Michael Tien, one of the pro-Beijing lawmakers who attended a meeting with Lam before her announcement. So she is making this gesture now, this concession. There is a month in between where she was hoping things would die down.

In the meeting, Lam came across as calm and hopeful, according to Tien. I think she honestly felt that this could settle the score.

It remains to be seen whether the measure will calm protests which have morphed into a much broader political movement, much of it fuelled by public anger at the police and the government.

This is like applying a band-aid to rotting flesh, said one protester, dressed in all black and wearing a mask and hard hat. The withdrawal cannot compensate for our blood and tears over the past three months, another said.

The organiser of several large marches over the course of the protest, Civil Human Rights Front, said it would continue with protests until all five demands were met.

The withdrawal of the bill is too little too late, said Bonnie Leung, vice convener for CHRF. One demand has been accepted so we maybe can celebrate a bit, she said.

But we see police brutality everyday, we have victims everyday. We cannot just leave it. Hong Kong people will still fight for justice and fight for the future of Hong Kong.

The protests have pushed Hong Kong, a major financial and business hub, to the brink of a recession, with businesses and shops suffering and investors reconsidering their presence in the city.

On Wednesday, Cathay Pacifics chairman John Slosar resigned, after its CEO Rupert Hogg left last month, amid pressure from Beijing on the Hong Kong airline whose staff have been supportive of the protests.

A survey of private business activity released on Wednesday showed the steepest deterioration in the health of the private sector since February 2009, at the height of the global financial crisis. Ahead of Lams speech, Hong Kongs Hang Seng index jumped 4%.

The protests have also pitted Hong Kongs freedoms, as promised under the terms of the former British colonys handover to China in 1997, against Beijings authority over the city.

Earlier this week, Reuters published a recording of Lam speaking to a group of business executives in which she said she would step down if she were able to suggesting Beijing had strong-armed her into remaining in office.

On Tuesday, however, Lam told reporters she wanted to remain in office to see Hong Kong through a difficult period.

Lams announcement came after a weekend of some of the worst clashes of the past three months as protesters threw petrol bombs and the police deployed water cannons, rubber bullets and teargas. On Sunday, protesters paralysed links to the citys airport, a major international travel hub.

Police were seen beating passengers in metro stations and arresting one bystander who was heckling them. A video on Tuesday, showed police chasing and tackling secondary students. In a separate incident, a young man was taken out of a rail station on a stretcher, apparently unconscious, after police had subdued him.

This announcement cannot change the fact that the Hong Kong authorities have chosen to suppress protests in a grossly unlawful way that has seriously damaged the peoples trust and sense of legitimacy of the government, said Man-kei Tam, the director of Amnesty International Hong Kong.

University and secondary school students launched a class boycott this week and protesters have planned further action in the weeks ahead. It includes another attempt to paralyse the airport, and a rally outside the US consulate in Hong Kong, to call on lawmakers to pass legislation that would sanction officials deemed as suppressing freedom or human rights in Hong Kong.

On Wednesday, protesters remained suspicious of Lams concession. Shes just doing this to try and disintegrate the movement. A lot of people think that, said a protester, who gave her name only as Katya.

The situation has escalated to a point where not even Beijing knows how to sort this. So theyre using different tricks and lies.

Lam is famous for breaking promises, said Jackie Lee, 36, who said he believed the concession was an attempt to appeal to less extreme demonstrators, and split the protest movement.