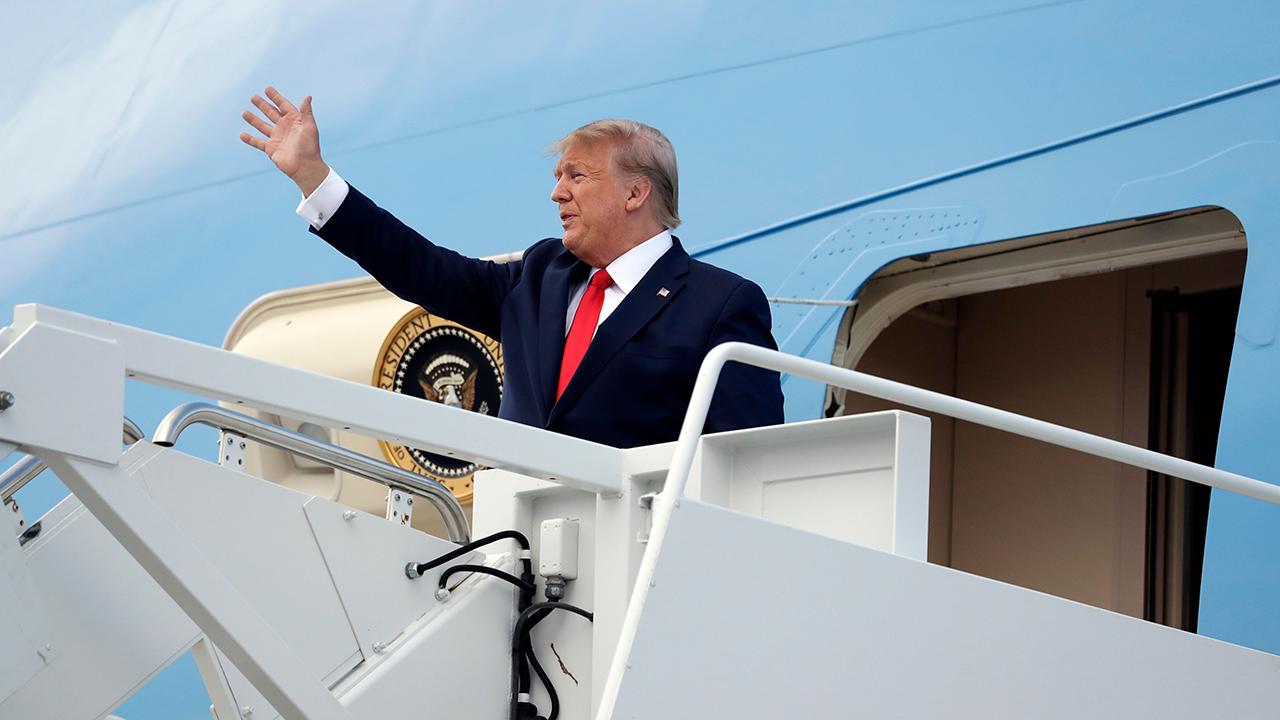 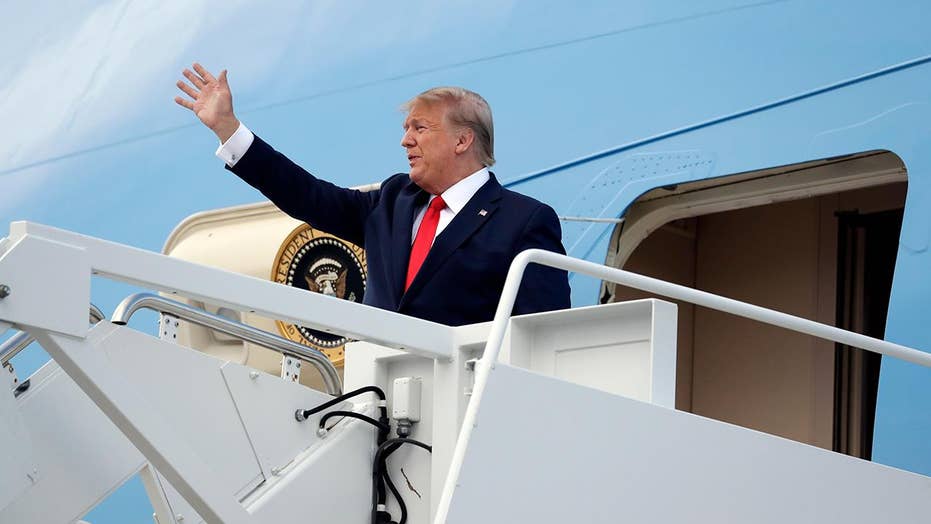 President Donald Trump boarding Air Force One in Albuquerque on his way to California on Tuesday. (AP Photo/Evan Vucci)

About 100 protesters lined the road about a mile from Trump’s luncheon site in Portola Valley, with demonstrators inflating giant Baby Trump and Trump Chicken balloons.

TRUMP OR WARREN? FIGHT ERUPTS OVER WHO HAS THE BIGGER CROWD SIZES

Talking to reporters aboard Air Force One, Trump got in some fresh digs about the state’s problem with homelessness, saying, “We can’t let Los Angeles, San Francisco and numerous other cities destroy themselves by allowing what’s happening.”

Los Angeles Mayor Eric Garcetti, a Democrat, said in a Facebook video post ahead of Trump’s arrival that he hoped the president would work with the city to end homelessness. He said he had not been invited to meet with the president.

The mayor was speaking at one of an eventual 26 housing facilities being built to transition people from life on the streets.

“President Trump: we have to press pause on politics, confront the homelessness crisis, and save lives now,” Garcetti said. “I wanted to talk to him a little bit as if he had come down here to South LA to understand and to hear the challenges we face and ways that Washington, D.C. — instead of demonizing us — might be able to actually come and help us.”

Earlier in the day, Garcetti sounded a conciliatory tone. “I know I’m just supposed to punch the president back, but if he is real about it, I’ll believe it when I see it, but I’ll also trust that he wants to save some lives as well,” the mayor said. “Certainly I do. We could do that together.”

“We can’t let Los Angeles, San Francisco and numerous other cities destroy themselves by allowing what’s happening,” Trump said aboard Air Force One. He said police officers on the beat have been getting sick and that tenants wanted to move because of the homeless problem.

California was seen as an incubator for the modern conservative movement that swept the state’s former governor, Ronald Reagan, into the White House in 1980. But, demographic changes and an influx of new residents have helped rework the political contours of the country’s most populated state drastically, with the former GOP stronghold of Orange County having more registered Democrats than Republicans as of this summer.

For Republicans, who have been resigned to political irrelevance at the state level, a donation to Trump could amount to its own form of protest.

“By showing up to a fundraiser deep in the belly of the beast, one is saying: ‘I don’t care what the liberal politicians are saying and I want to show my support for him publicly,'” Dhillon said.

California has long been a key fundraising hotbed for politicians of both parties, which have relied on wealthy industry heads and Hollywood to help finance their political ambitions. But, under Trump, the run-of-the-mill fundraising trip has taken on a complicating dimension because of his harsh criticism of the state’s immigration laws and its forest management practices, which he blamed in part for deadly wildfires.

Earlier this month, Trump fired back at Messing after she tweeted that attendees of the Trump’s California fundraisers should be outed publicly, following a similar push from costar Eric McCormack.

Trump tweeted back: “I have not forgotten that when it was announced that I was going to do The Apprentice, and when it then became a big hit, helping NBC’s failed lineup greatly, @DebraMessing came up to me at an Upfront & profusely thanked me, even calling me ‘Sir.’ How times have changed!”

McCormack later said he never supported blacklists, to which Messing responded, “I couldn’t have said it better.”

Overall, Trump has continued to rake in gobs of cash over a year out from the November 2020 contest, with his campaign and the Republican National Committee pulling in over $210 million since the start of 2019, Federal Election Commission records showed. That’s more than all the current Democrats seeking to replace him raised combined during that period.

The visit this week marked Trump’s fourth visit to the state during his presidency. Housing and Urban Development Secretary Ben Carson is expected to follow Trump to California, one day behind the president, with visits to San Francisco, Los Angeles and San Diego. A senior HUD official said Carson would speak on a range of issues, including increasing the supply of affordable housing and promoting investment in distressed communities.

Meanwhile, a Republican congressman in California said Tuesday he won’t run for re-election next year, making him the 18th GOP incumbent to bow out of the House of Representatives now that the party is in the minority.

GOP Rep. Paul Cook announced he instead will run for a seat on the San Bernardino County Board of Supervisors in 2020.

California has 53 U.S. House seats, the most of any state. Its Republican congressional delegation was cut in half during the 2018 midterms, leaving the party with just seven of those seats.

Fox News’ Andrew O’Reilly and The Associated Press contributed to this report. 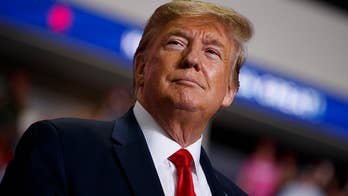