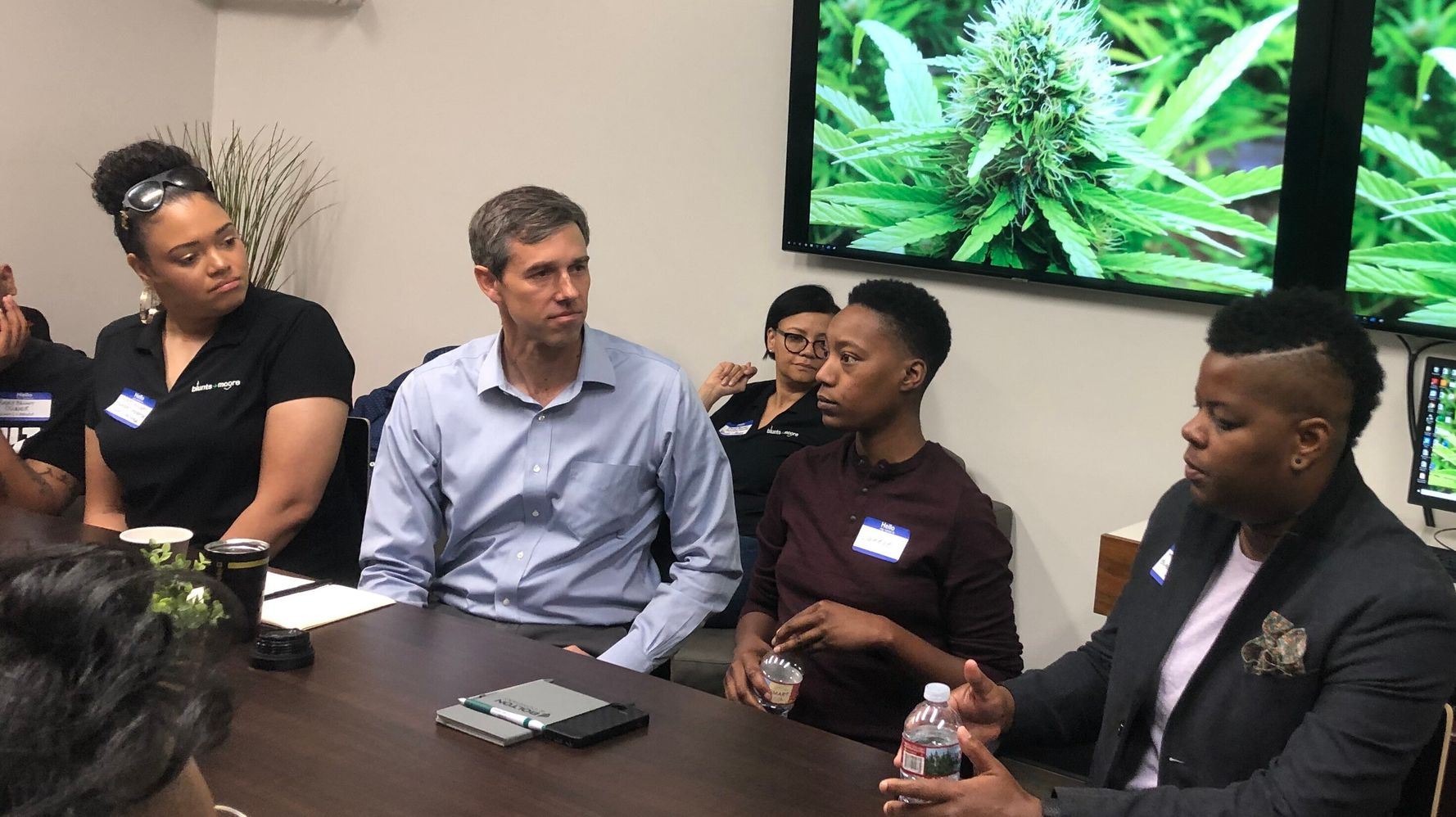 OAKLAND, Calif. ― Hours after Democratic presidential candidate Beto O’Rourke unveiled a sweeping plan to legalize marijuana and repair the racist injustices of the war on drugs, weed industry leaders met with him here on Thursday to discuss the merits and limits of such proposals.

The former Texas congressman hosted a roundtable gathering with about a dozen participants ― mostly people of color ― that included business owners, local officials and community organizers. The discussion touched upon the challenges in creating a legalized marijuana industry nationwide while avoiding America’s ongoing history of racism and the injustices of the capitalist system.

“When [weed is legal] at the federal level, and the tobacco and pharmaceutical industries come in, where is the protection for the small businesses and the people of color?” asked Phae Moore, co-founder of Blunts and Moore, an Oakland dispensary where the event was held.

The shop was the first “social equity” dispensary to open as part of a city program that grants permits to people with previous weed-related convictions or from neighborhoods with disproportionate arrests.

Moore expressed concern about the federal taxes O’Rourke’s plan would impose on the marijuana industry, which she said is already heavily taxed. Businesses like hers would have to pass on those extra costs to consumers, she said, at the risk of losing out to competitors in the ongoing illicit market.

“You’re overtaxing and (customers) can get it at a better rate on the street,” she said, as a marijuana plant glowed green on a screen behind her on a wall.

O’Rourke’s detailed legalization proposal includes expunging the criminal records of people convicted of marijuana possession, as well as requiring the majority of licenses for marijuana businesses go to minority-owned shops and people with previous weed convictions.

Black people across the nation were nearly four times more likely than whites to be arrested for marijuana possession in 2010, according to a 2013 study by the American Civil Liberties Union ― this despite data that suggested the groups use the drug at about the same rate.

O’Rourke kicked off the conversation at the roundtable by saying he was “here to listen.”

“As a white guy it was never really a fear of mine that I’d be stopped or arrested for marijuana,” O’Rourke said. “How do we ensure those that are the most harmed by the war on drugs have the greatest chance to succeed moving forward? And I want your guidance and help doing that.”

All of the leading Democratic presidential candidates support federal marijuana legalization except for former Vice President Joe Biden, who has stopped short of backing such a move for recreational use. He has instead called for legalizing medical marijuana and decriminalizing the use of marijuana, as well as expunging prior marijuana-related convictions.

Leaders in the room in Oakland discussed how legalization in the weed industry must be tied to lifting up the communities surrounding it, particularly those most harmed by criminalization.

“The bread and butter comes from community ― how can you make millions, and not give that back into community? And not through beautification of parks,” said Christine De La Rosa, co-founder of the People’s Dispensary, which is 100% LGBTQ-owned and operates in Oakland and Portland, Oregon. Her company dedicates 10% of profits to a rapid response fund that helps finance donations to homeless neighbors and “micro-investments” in business ideas by community members who may not have access to venture capital or other funding, she said.

Others brought up the challenges of having policies with good intentions that can go awry when applied in practice.

Lanese Martin, co-founder of the Hood Incubator, pointed to Oakland’s own equity program that gives priority for permits to marijuana businesses that “incubate” applicants with previous convictions ― meaning they provide them with three years’ free rent on at least 1,000 square feet of space to develop their outlets. But then some applicants need more than just space.

“Growing up in communities that have been underserved ― why would they have the skillset now to run a company?” Martin said. “Most businesses are handing over the space so they can get through the hoops, then you have ‘equity’ people who have no ability to run a business.”

Many of the speakers insisted on the importance of giving a strong voice on federal policies toward the marijuana industry to people from the communities most affected by decades-long punitive drug policies.

“How do we create development without displacement?” asked Oakland City Council member Loren Taylor. “And make sure those anchored here are benefiting from improvement?”

O’Rourke ended the session by saying he wanted to ensure his legalization proposal was “informed by people who have lived this.” He pointed to Alphonso Blunt, who now co-owns the Blunts and Moore dispensary but in 2004 was among the many black men who’d been arrested for selling weed.

“These challenges are systemic, endemic, foundational ― we can’t look at just one industry apart from the rest of the country,” O’Rourke said. “It makes the solutions that much more challenging but it’s more honest … I certainly have not figured all this out, but I feel many steps closer thanks to what you shared today.”