Commons’ fury as PM rejects pleas over his ‘inflammatory’ rhetoric 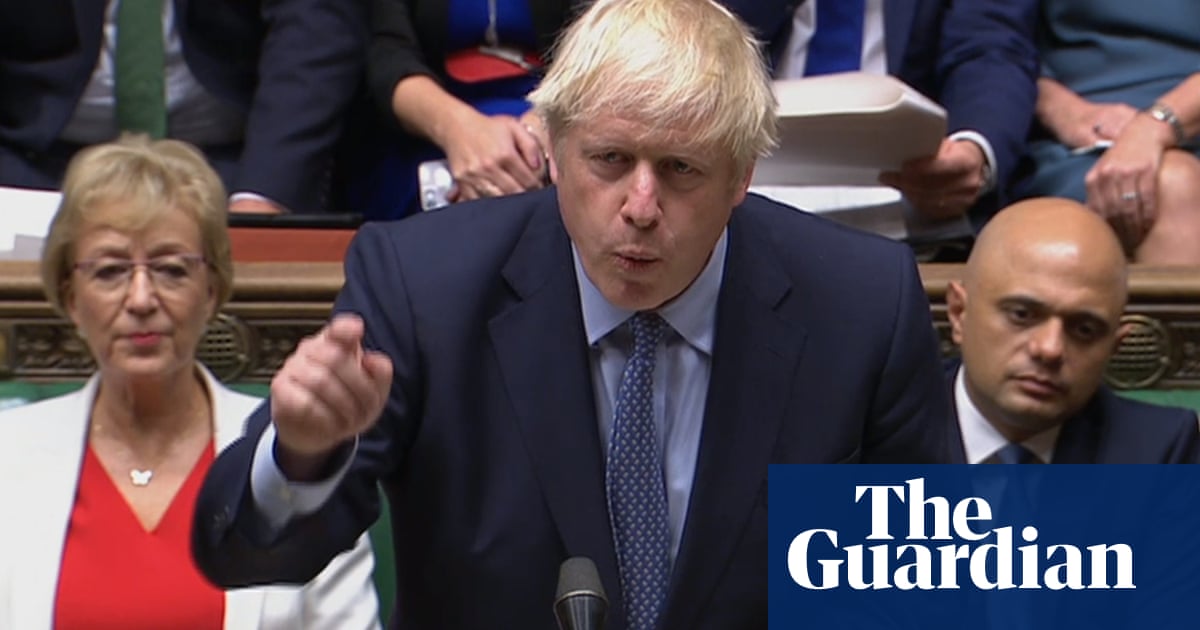 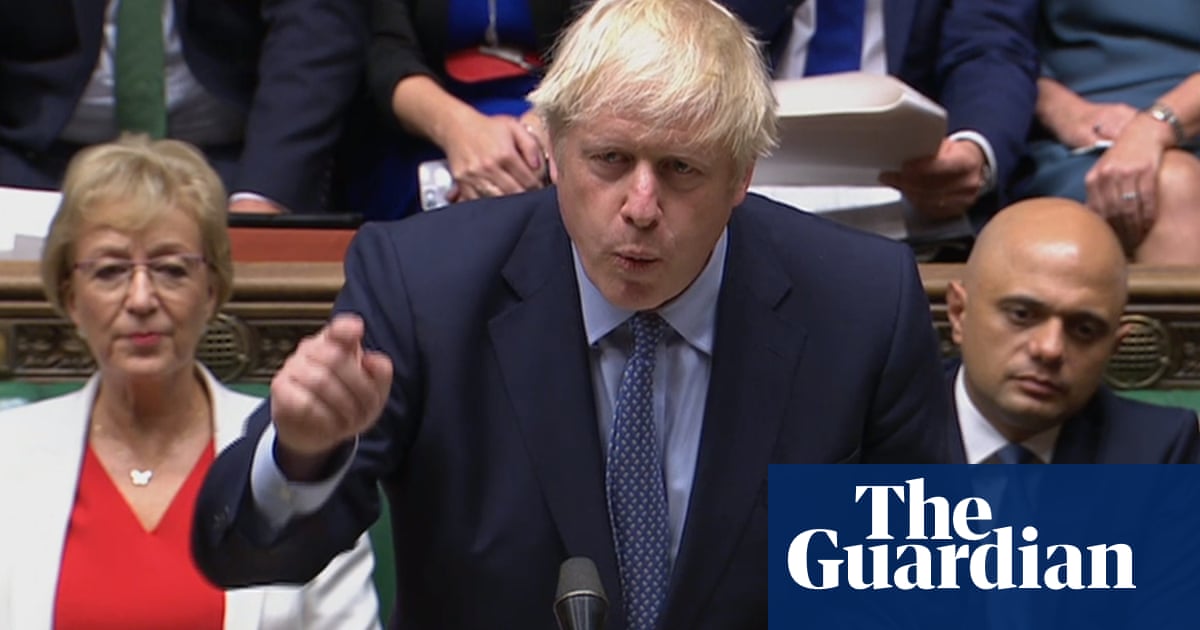 An unrepentant Boris Johnson has sparked a furious backlash after he repeated his criticism of the supreme court judgment, and rejected MPs pleas to moderate his inflammatory language as humbug.

Addressing a rowdy and adversarial House of Commons, just hours after flying back early from New York, Johnson went on the attack, accusing Jeremy Corbyn of trying to thwart Brexit and running scared of an election.

Johnson infuriated opposition MPs by dismissing fears that his use of language such as surrender and betrayal was dangerous in a heightened political climate. To gasps, he claimed the best way to honour the memory of the murdered MP Jo Cox was to get Brexit done.

And he continued to deploy the people versus parliament rhetoric that has become a signature of his premiership, claiming: The people outside this house understand what is happening The leader of the opposition and his party dont trust the people.

And he added: Instead of facing the voters the opposition turned tail and fled from an election. Instead of deciding to let the voters decide, they ran for the courts it is absolutely no disrespect to the judiciary to say I think the court was wrong.

Johnsons appearance led critics to accuse him of failing to show any humility over his supreme court defeat.

Responding to the prime minister, Corbyn accused him of failing to take the supreme court defeat seriously, calling his statement, 10 minutes of bluster from a dangerous prime minister who thinks he is above the law but in truth is not fit for the office he holds.

Labours Jess Phillips said: I know that the prime minister wants to appear as a strong man. But the strongest thing he could do that would look the best to this country at the moment would be to act with some humility and contrition.

Other female MPs, including Paula Sherriff, attacked the prime minister for repeatedly calling the act put through parliament by Hilary Benn to take no-deal Brexit off the table the surrender bill.

She said: The prime minister has continually used pejorative language to describe an act of parliament passed by this house. We should not resort to using offensive, dangerous, inflammatory language for legislation we do not like.

Recalling the memory of her friend Cox, she said many MPs had received death threats.

Johnson replied that he had never heard such humbug in all his life. He caused further outrage when telling Labours Tracy Brabin, who was elected to Coxs seat following the MPs murder by a far-right extremist a week before the EU referendum, that the best way to honour the memory of Jo Cox and to bring this country together is, I think, to get Brexit done.

Cox campaigned for remain. Her widower, Brendan, later wrote on Twitter: Feel a bit sick at Jos name being used in this way. The best way to honour Jo is for all of us (no matter our views) to stand up for what we believe in, passionately and with determination. But never to demonise the other side and always hold onto what we have in common.

The leader of the House of Commons, Jacob Rees-Mogg, later suggested all MPs, have a responsibility to be mild in our language when were speaking in this house or outside.

The exchanges capped a day of dramatic and bad-tempered House of Commons business over Brexit, the likelihood of an election, and the prime ministers calamitous defeat in the supreme court.

But after scrambling to return early from the UN general assemblys meeting in the US, Johnson offered little indication of how the government now intends to proceed, instead challenging Labour or any other opposition party to table a motion of no confidence, and promising to set aside parliamentary time on Thursday for MPs to vote on it.

Labour, the SNP and the Liberal Democrats have all insisted they will not seek to bring down the government and trigger a general election until a delay to Brexit is secured. But Downing Street suggested that if Labour fails to table a vote of no confidence it will effectively indicate support for Johnsons strategy.

After Tuesdays damning judgment, Corbyn said that Johnson should have done the honourable thing and resigned. Yet here he is, forced back to this house to rightfully face scrutiny, without a shred of remorse or humility and no substance whatsoever.

Labour MP Gloria de Piero of the cross-party MPs for a deal group called for a compromise, urging the prime minister to publish the potential areas of agreement identified in cross-party talks earlier this year.

Johnson responded sympathetically and said he would try to produce something in the coming days. He is likely to need the support of Labour MPs to have any chance of passing a Brexit deal in time for the 31 October deadline.

Despite the supreme court verdict, the Conservatives intend to press ahead with their party conference in Manchester next week. They have tabled a motion, which will be voted on Thursday morning, asking MPs to support shutting down parliament for three days next week to accommodate it.

A government source said: I cannot guarantee that there wont be an impact on the economy of Manchester. The Labour party if they are doing this it will be a nakedly political act.

Manchester Central MP Lucy Powell had earlier warned that the cost to the citys economy if the conference was cancelled could be up to 30m.

Labour sources said they had proposed a compromise plan to the Conservatives of debating legislation on which both sides are in agreement next week, including the domestic abuse bill, allowing many Tory MPs to attend the conference.

The domestic abuse bill was dropped as a result of prorogation, along with several others. Labour initially believed the plan had been agreed but it was later rejected.

The Lib Dems have already said they will not support parliament being shut down again. A party source said, after Boris Johnson unlawfully suspended parliament to stop us scrutinising, the last thing were going to do is give them a three-day Tory jamboree.

After Corbyns stinging critique, Johnson hit back with an extended political attack on the leader of the opposition, accusing him of running scared to which many Conservative MPs responded with rowdy cheers and an extended round of applause.

Why wont they allow him to unleash his charms on the electorate? Is it because they are not only terrified that he is going to lose but also even more terrified of the remote possibility that he might win.

He cant control his own party. He cant decide whether he is for leave or for remain. Hes being held captive by his colleagues, he said.

Johnson was the fourth minister to address parliament on Wednesday, as MPs took the opportunity to press the government on a series of other issues, including the collapse of travel company Thomas Cook and the situation in Iran.

Earlier, the attorney general, Geoffrey Cox, who advised the government that an extended suspension of parliament would be lawful according to advice leaked on Wednesday, launched an extraordinary attack on MPs.

This parliament is a dead parliament, he said. It should no longer sit. It has no moral right to sit on these green benches.