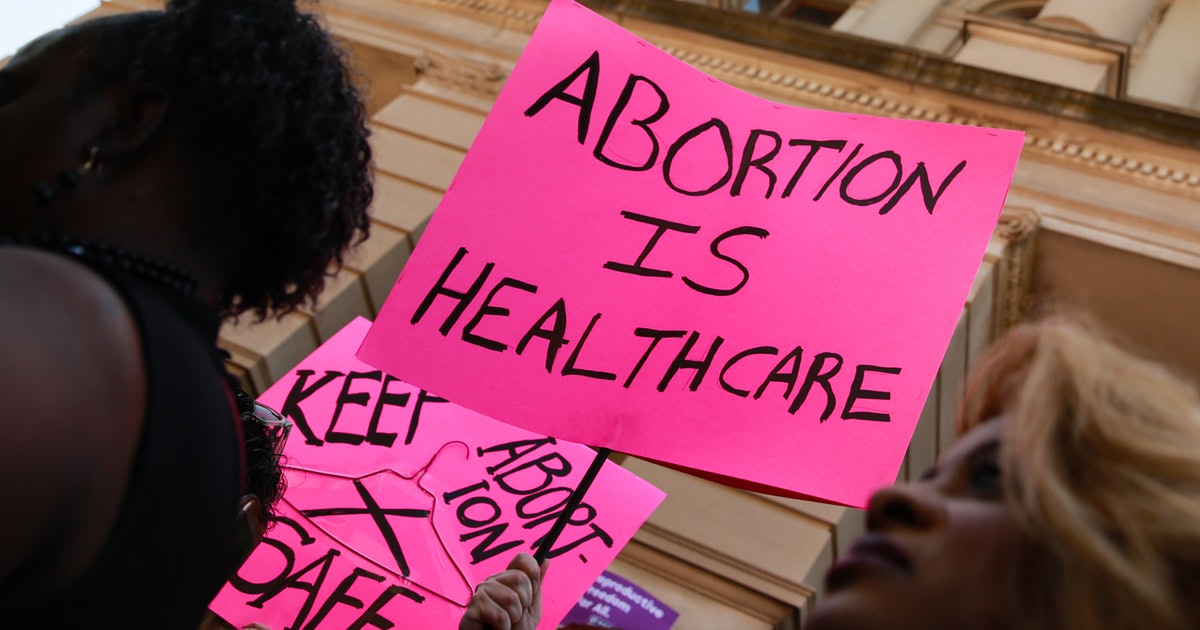 For 43 years, the Hyde Amendment has barred the use of federal Medicaid funding to finance abortion care in almost all cases. In the decades since Congress passed the Hyde Amendment in 1976, activists across the country have tirelessly demanded its repeal. But how is the Hyde Amendment impacting reproductive health care after all this time? For starters, this legislation pushes abortion further out of the reach of those who are already marginalized.

“For 40 years, the Hyde Amendment has let people with less access to economic security know that their rights are not equal based on where they live and how much money they make,” Yamani Hernandez, the executive director of the National Network of Abortion Funds, tells Elite Daily by email.

The Hyde Amendment was named after former Illinois Rep. Henry Hyde, a Republican who was the bill’s chief sponsor. According to , the Hyde Amendment was first passed in 1976 as part of an appropriations bill for what later became the Department of Health and Human Services (HHS). Since its passage, it has been renewed every year with minor modifications, but its premise has remained the same — the Hyde Amendment bans federal funding from being used for abortion except in cases of rape, incest, and to protect a pregnant person’s life. This in turn impacts anyone who obtains health insurance through government programs like Medicaid, and in some cases, marketplace exchanges. HHS declined to provide any comment on the Hyde Amendment, its effects, and its renewals to Elite Daily.

“No funds authorized or appropriated by Federal law, and none of the funds in any trust fund to which funds are authorized or appropriated by Federal law, shall be expended for health benefits coverage that includes coverage of abortion,” the text of the amendment reads. Even after more than four decades, that one sentence is still rippling through American health care.

Sept. 30 marks the 43rd anniversary of the Hyde Amendment’s passage through Congress, and the political landscape of the country now looks rather different than it did in 1976. The Hyde Amendment was implemented in 1977, just a few years after the landmark abortion rights case was decided by the Supreme Court in 1973. affirmed the federal right to access abortion care, but in recent years, numerous states have implemented restrictive abortion bans. According to the Guttmacher Institute, a reproductive rights think tank, these bans — in conjunction with the Hyde Amendment — have made it disproportionately more difficult for people of color, low-income people, immigrants, LGBTQ people, and other marginalized communities to access abortion services.

The crux of the Hyde Amendment is this: It prevents millions of people, ranging from federal employees to military personnel, from using their government-provided health insurance to access abortion care except in the event of rape, incest, or life endangerment. According to reproductive health organization Planned Parenthood, an abortion can cost up to $950 depending on whether or not a person has insurance, where they live, the type of abortion they get, and how far along they are in their pregnancy. Certain methods can cost even more. Restrictions like the Hyde Amendment often create additional delays when a pregnant person is seeking an abortion, thereby making the abortion even more expensive. As a result, Megan Donovan — the senior policy manager at the Guttmacher Institute — tells Elite Daily that many Americans may make financial sacrifices in order to be able to pay for an abortion.

“People report delaying or foregoing paying utility bills or rent or even buying food or other essentials for themselves or their families,” in order to pay for costs associated with abortion, Donovan explains in an interview. “Other people report having to rely on family members or receive financial assistance from clinics or doing things like sell off their belongings to come up with the money to pay for an abortion.”

In Hernandez’s experience working with abortion funds, which are some people’s last resort in funding abortion care, even these sacrifices aren’t always enough. “Many people don’t get their abortions at all, and are forced to birth when they weren’t ready or able to parent without the support they needed,” she says.

According to Donovan and reproductive rights advocacy group All* Above All, one in four low-income women ends up having to carry an unwanted pregnancy to term because the Hyde Amendment prevents them from using Medicaid insurance to cover an abortion. The Guttmacher Institute, meanwhile, reported that nearly one in six women across the country between the ages of 15 and 44 is enrolled in Medicaid, and 60% of those women live in the 34 states and the District of Columbia that do not allow Medicaid coverage for abortion, except in the circumstances mentioned in the Hyde Amendment. As of September 2019, only 15 states currently direct Medicaid to cover all or most abortion expenses, per Guttmacher, and only five have done so voluntarily.

To combat these gaps in insurance coverage, abortion funds around the country provide logistical and financial assistance to people who cannot afford to access abortion care. According to Hernandez, member abortion funds in her network hear from more than 150,000 people from around the country each year on their helplines, indicating that Americans are actively seeking assistance in the face of abortion restrictions.

“Most Americans are not prepared for an unexpected $500 health care expense ,” Hernandez points out. That expense doesn’t even include things that may be necessary to actually access abortion care, like transportation to and from a clinic, finding a place to stay, taking time off work, and paying for someone to watch the children a pregnant person may already have.

Due its restrictive nature, the Hyde Amendment has put a significant burden on many communities that are already marginalized. For that reason, in addition to fighting for a repeal of the Hyde Amendment, Democratic lawmakers have also come up with legislation of their own. The EACH Woman Act, sponsored by Rep. Barbara Lee (D-California) and Sen. Tammy Duckworth (D-Illinois), is a bill progressives have been pushing for years in order to ensure that pregnant people will be able to access comprehensive reproductive health care — including abortion — through their government health insurance. If the bill were to pass, which is more likely now with a Democratic House, it would also prevent state, federal, and local lawmakers from interfering if private insurance companies do decide to cover abortion services. Hernandez, for her part, praises the proposed legislation for helping pregnant people avoid “medically unnecessary waiting periods by anti-abortion politicians,” as well as any costs associated with delays in abortion care.

Donovan agrees. “Getting rid of the Hyde Amendment and related abortion coverage restrictions would simply put abortion back where it belongs in the full spectrum of reproductive health care that people need and deserve access to,” she argues. “It would prevent the government from stepping in and denying people coverage for the care they need based simply on their enrollment in federal programs.”

The EACH Woman Act is one of many efforts to not only repeal the Hyde Amendment, but also to challenge the political climate that maintains the Hyde Amendment’s restrictions. As serious as the Hyde Amendment is, it is not the only bar to accessing abortion care. As both Hernandez and Donovan make clear, the Hyde Amendment acts in tandem with numerous other restrictions on abortion, like six- or eight- week abortion bans in states ranging from Missouri to Alabama. That’s not to mention laws that find other ways to limit abortion, such as by over-regulating providers until they’re forced to close, imposing time and financial barriers to access, and even spreading misinformation. All of these restrictions together only serve to make abortion even more difficult to access.

That’s why repealing the Hyde Amendment is such an important step, Hernandez says. “Abortion is legal and needs to be accessible to everyone, not only those who can afford it,” she puts it simply. “A right only in name is not a right.”