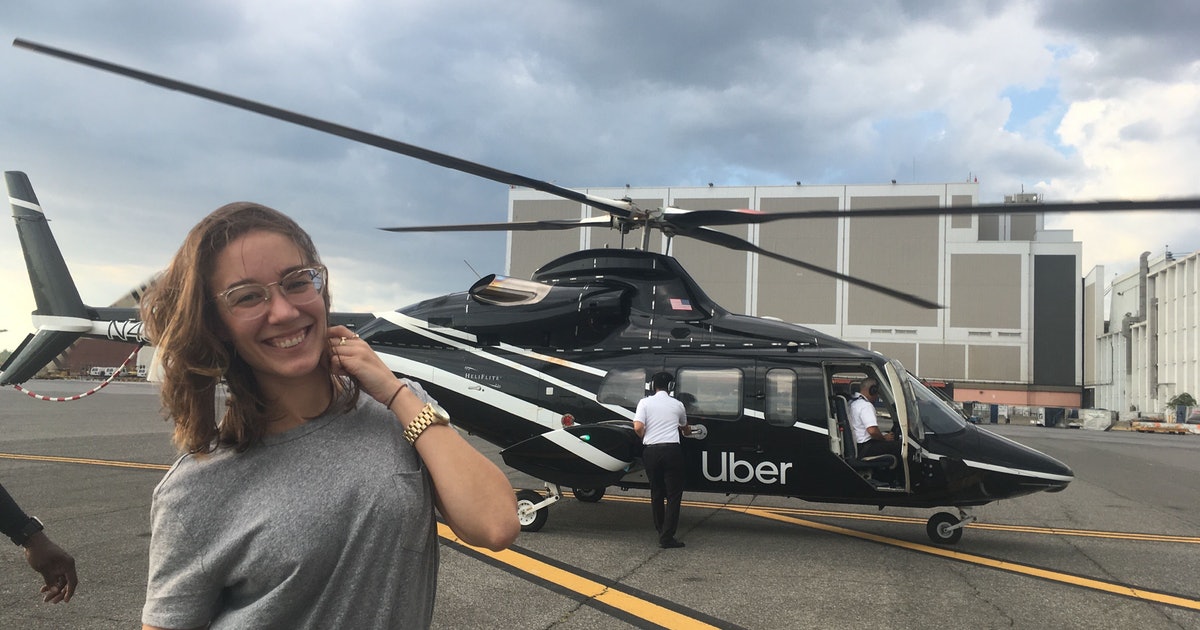 What Is Uber Copter? It’ll Make Your VIP Travel Fantasies Come To Life

The only form of hell worse than at the airport, is to the airport. As someone who is late absolutely everywhere in my life, trying to make a flight is a unique form of anxious torture that involves traffic, non-refundable fees, and the near-inevitability of forgetting some crucial form of ID. So when I got the chance to skip over it all, you bet I took it. If you haven’t heard yet, Uber is integrating helicopter flights into their routine, so if you’re asking what Uber Copter is, I can lay out this VIP-style experience. I have to say, I might be ruined for regular cars after this.

Uber Copter is the latest addition to the Uber options, and is available only in New York City as of Oct. 3. The service, in partnership with helicopter operator HeliFlite, runs exclusively from lower Manhattan to John F. Kennedy Airport in Queens, and the point is to literally hop right over all the nightmarish traffic that raises your blood pressure. The premise is simple: an Uber car picks you up and drives you to the helipad on the East River, where you check in with your regular state ID or driver’s license and are escorted to your helicopter for an eight-minute jaunt across the East River to the airport. When you land, an Uber car is waiting to take you the five or so minutes to your terminal. Passengers are allowed one small piece of luggage, like a carry-on suitcase, and one personal item.

Crucially, when you arrive at the helipad, there are some steps to go through. Uber Copter passengers must get safety instructions by video or from a staffer before they’re allowed on the helicopter, which lays out things like the exits and life vests (thankfully, we didn’t need these). The check-in procedure also asks how much you weigh and assigns seats, which is important for the weight distribution. On the return ride with only two passengers aboard, we still found ourselves with assigned seats, which the check-in staff pointed out to us before we boarded.

The helicopter ride itself is surprisingly smooth. While it’s plenty loud on the helipad, the interior of the helicopter, which seats five, feels a lot like a regular Uber. Before arriving, I assumed I would have to wear the kinds of noise-muffling headphones you see people wearing in the movies, but it turns out those might be only for the movies. Once the door of the chopper closed, we were able to speak in normal voices and carry on a conversation like in any Uber. The copter is pleasantly, if not extravagantly, lush — leather seats, Uber-branded headrest coverings, and good legroom.

And oh yeah, the views are .

“What we’re trying to create right now … is the opportunity to experience what we call this multimodal aerial ridesharing journey,” Anil Nathan, general manager of aviation for Uber, tells Elite Daily. “[It’s] stringing together what Uber already does amazing in terms of the ground rides business with aviation, and making it to be a super fast, kind of seamless experience.”

While it’s accessible to everyone, the VIP experience comes at a VIP cost. In keeping with Uber’s fluctuating prices, Uber Copter doesn’t have a set price but averages a cool $200-$225 for one person, one-way. And the system isn’t flawless — the car portion of the journey is subject to traffic, driver cancellations, or other hangups just like any journey. (I accidentally got dropped a block and a half away from the helipad when neither my driver nor myself knew where the turn was, which would have sucked with any bulky luggage.) The service is also fairly limited in scope, with pickups only available below Houston Street in Manhattan and dropoffs only below 59th Street. The copters run every 20 minutes between 2 and 5 p.m., Monday through Friday, to coincide with rush hour and the time when you don’t want to be in airport traffic.

Booking is fairly easy, though. Uber Copter will only appear as an option if your pickup is in the permitted area of lower Manhattan, and then it works much like a regular booking — you set your departure time, how many seats you need, and confirm. The Uber app tells you what time you have to meet the car to take you to the helipad (my ride arrived about 30 minutes before the helicopter flight). Being picked up in my Uber to being dropped off at the airport hotel ran just about an hour, which isn’t much better than driving, per Google maps, but it much more pleasant. Per an Uber spokesperson, the copters are OK in wet weather, too, which was reassuring to hear since it started raining on our flight back.

While Uber Copter is already some pretty big VIP dreams in action, Uber is thinking even bigger still — Uber Copter is just one step towards Uber Elevate, which is Uber’s plan for ridesharing with electric aircraft. The service is predicted to roll out in 2023, starting in Dallas, Los Angeles, and Melbourne. “What we’re doing with Uber Copter is essentially the stepping stone toward that,” says Nathan. “Traditional ground-based means of transportation, whether it be cars or subways or whatever it might be, there’s a certain limit to what you can support more people in cities.” Going in the air, he says, “kind of expands the universe of what you can do and what you can create.”

The future of air travel aside, I will happily take the ease and pleasure of a classy ride to the airport. Catch me at the bar closest to the gate, and see you all when I get back.