‘It Was Like A Rallying Cry: Bernie Sanders Campaign Surges Ahead After Heart Attack 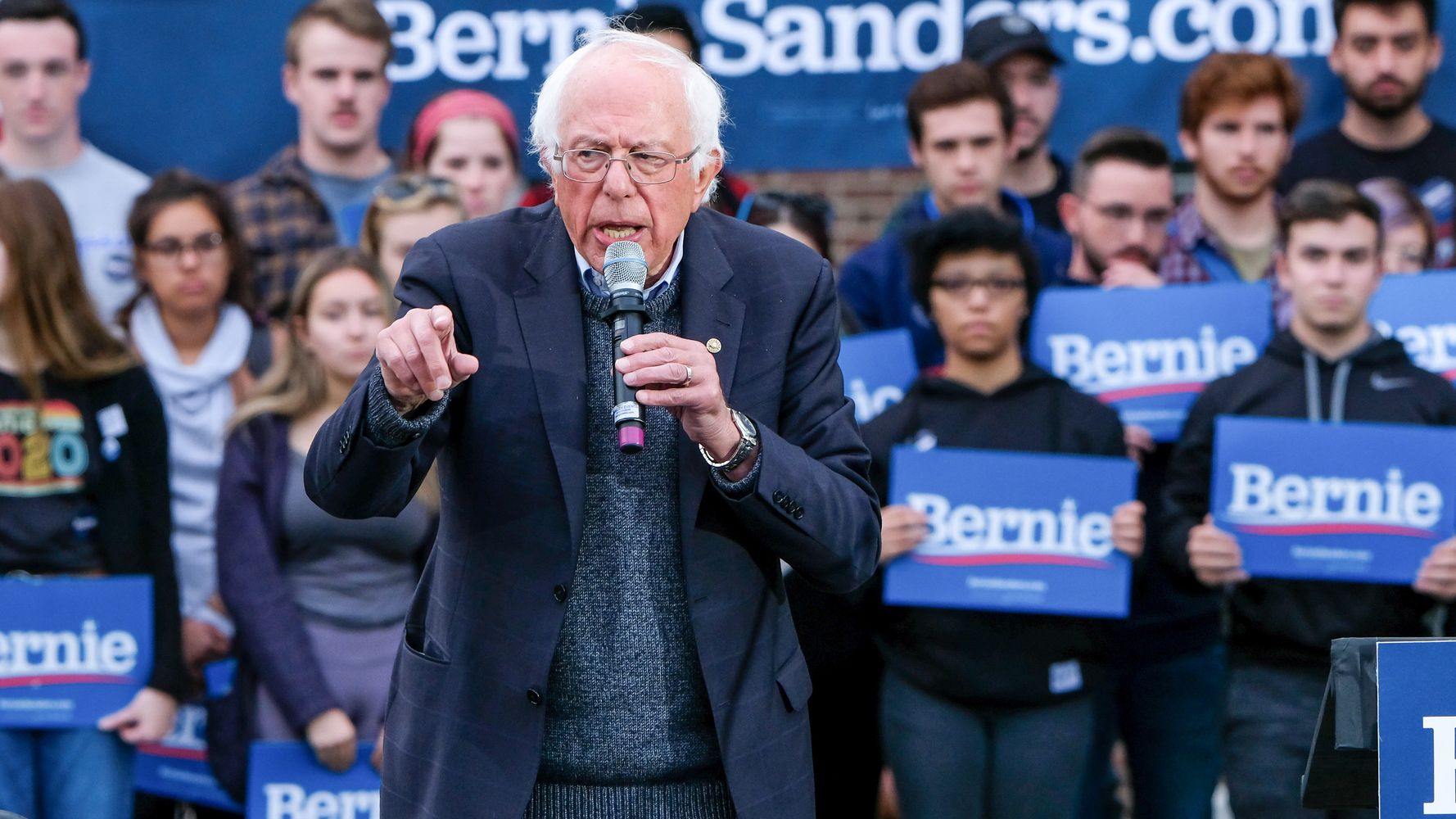 Less than a week after suffering a heart attack, Sen. Bernie Sanders (I-Vt.) addressed hundreds of campaign staffers on Monday afternoon to offer his gratitude for their work and assure them he is more committed than ever to winning the Democratic presidential nomination.

“Ironically, I will tell you that I feel more strongly about the need for a political revolution today than I did when I began,” he said, according to the campaign.

The mood amongst the staffers who were on the brief call was boisterous, according to three people who were on the call who requested anonymity to speak without authorization.

One of the campaign aides described being moved by Sanders’ reminder that their campaign — which boasts the slogan, “Not me. Us.” — was about the hopes and dreams of millions of working people seeking a better life.

“You work so fucking hard on these things, that it’s good to hear the person you work for have this really kind of humbling approach to it all,” the aide said. “He said ‘Don’t take your eye off the ball’ in a way that really got people moving.”

The call embodied the broader response that the campaign has had since Sanders was hospitalized late Tuesday night with chest pain that ended up being a “myocardial infarction,” or heart attack: That Sanders is well on his way back to full health, that his fight for Medicare for All is more personal than ever, and that he has no plans to slow down his campaign.

“The working class Americans who are the core of Bernie’s movement wake up each day and battle adversity of all kinds, and we believe they will be drawn even closer to the senator as he continues to fight for a shared vision to transform our country so it works for all of us – not just the wealthy and well-connected,” Sanders campaign manager Faiz Shakir said in a statement on Monday.

Sanders, 78, was treated in Las Vegas, Nevada, with the insertion of two stents to unclog one of his arteries. On Friday, he emerged from the hospital alongside his wife Jane with a triumphant fist in the air, recorded a video for his supporters on social media, and returned home to Burlington, Vermont. He and his wife took a walk in the rain on Monday, which CNN captured on camera.

In addition to facing the politically tricky task of persuading primary voters that a septuagenarian heart attack survivor is up to the task of winning the White House, the Sanders campaign is already working to quiet skepticism of its immediate response to his ailment.

Nearly three days passed between Sanders’ hospitalization and the announcement on Friday that he had suffered a heart attack. Sanders’ team maintains that they provided the accurate medical information as soon as it was available; they were not sure of the diagnosis until he was discharged from the hospital. In keeping with a mid-September promise, Sanders will be releasing his full medical records in the near future, though the campaign did not provide any additional details about timing.

The Sanders campaign did its best to continue with business as usual in the days following his hospitalization. Over the weekend, the campaign dispatched three of its co-chairs ― former Ohio state Sen. Nina Turner, California Rep. Ro Khanna and San Juan, Puerto Rico, Mayor Carmen Yulín Cruz ― to barnstorm the early primary states with a packed schedule of events. And early Monday morning, the campaign released Sanders’ plan to get corporate money out of politics, including the cash-riddled presidential nominating conventions.

Sanders will have his first chance to demonstrate his vitality at the fourth Democratic presidential debate in Westerville, Ohio, on Oct. 15. The Vermont senator does not have any public events planned prior to the debate; he canceled a scheduled appearance at an LGBTQ town hall on CNN this Thursday.

He comes back to an invigorated campaign with a staff and a support base that has doubled down in their efforts to make this happen. Jim Zogby, Sanders campaign surrogate

In the meantime, the campaign is keen to showcase the strength of Sanders’ support network, which appears to have been inspired by his hospitalization to redouble their efforts on his behalf.

The campaign announced on Sunday that its staff and volunteers had met its goal of making 1 million phone calls to voters in Iowa, New Hampshire, Nevada, South Carolina and California in ten days’ time. According to an aide, the campaign experienced a spike in volunteers on Wednesday after news of Sanders’ hospitalization broke, pushing the phone call tally up to 1.3 million.

The figure is not surprising given the frenzy of emotion among his supporters following his hospitalization.

A number of Sanders partisans with significant social media followings downplayed the significance of the stent procedure and highlighted the speed of Sanders’ recovery.

And the campaign racked up 8,000 donations on Wednesday, according to co-chair, Rep. Ro Khanna of California.

One of the donors was RoseAnn DeMoro, the former executive director of the National Nurses United union, and a prominent campaign supporter, who chipped in $100.

“It was like a rallying cry. It was incredible,” DeMoro said of the outpouring of support for Sanders. “That’s the difference between having a movement as opposed to just a campaign.”

Sanders supporters, many of whom have lost faith in more conventional politicians, are famously passionate in their support for Sanders.

The prospect that a health scare could damage his standing in the polls prompted so much renewed involvement due to supporters’ belief that Sanders is uniquely equipped to defeat Trump and solve the country’s problems, according to Jim Zogby, a pollster and top Sanders surrogate.

“People all of a sudden woke up and said, ‘Bernie might not be in the mix ― this can’t be,’” said Zogby, who also runs the Arab American Institute. “He comes back to an invigorated campaign with a staff and a support base that has doubled down in their efforts to make this happen. Because they realize that for them ― and for me ― he’s the critical choice.”

Calls for Sanders to drop out of the race ― however few they were in number ― only riled up Sanders’ supporters, many of whom already firmly believe that the established media and political classes will stop at nothing to prevent Sanders from winning.

The Thursday release of “Rising Up,” a five-minute video created by Matt Orfalea, a Sanders activist not affiliated with the campaign, added to the dramatic “us versus them” narrative that has long animated Bernie World.

Orfalea’s video, which many called an advertisement, showed numerous clips of pundits, reporters and comedians mocking Sanders on a series of topics, juxtaposed with footage of him doing the opposite — greeting supporters with a smile, listening sympathetically, speaking to crowds of diverse voters.

The spot, which featured some of the do-it-yourself charm of the 2016 campaign, earned plaudits from prominent Democrats who are not supporting Sanders but are nonetheless sympathetic to claims of media bias against him. In just a few days, the video racked up over 6.3 million views on Twitter alone ― far more than Sanders’ first official campaign ad, which came out days earlier.

“It’s something that deeply resonates and it was released at the perfect moment, when Bernie needed it the most,” Rebecca Katz, a progressive strategist who is not aligned with any presidential candidate, said of the video. “It’s the kind of things voters don’t just watch but also share.”

A question on the minds of some poll watchers is nonetheless how Sanders’ heart attack affects the campaign of Massachusetts Sen. Elizabeth Warren, 70, a fellow progressive who has surpassed Sanders in national and early primary-state polls. In a gesture of solidarity, Warren’s campaign bought dinner on Wednesday for Sanders’ staff at his campaign headquarters in Washington.

The Warren campaign declined to comment for this story.

But two prominent Warren supporters suggested that Sanders’ continued presence in the race could only help her candidacy.

Adam Green, a co-founder of the Progressive Change Campaign Committee, which has endorsed Warren, argued that the presence of another left candidate is mutually beneficial. It increases the legitimacy of their shared ideas, and is liable to dissuade super-rich donors from erecting a super PAC to take out either one of them, he posited.

“If you knock one out, you help the other,” Green said of such a scenario. “And if you run ads hitting both of them, you just elevate them as the two most clear and transformational progressives.”

“There’s no coincidence that both of them are smashing the neoliberals in this race in terms of fundraising,” said Zaheed. “Competition makes each one better.”