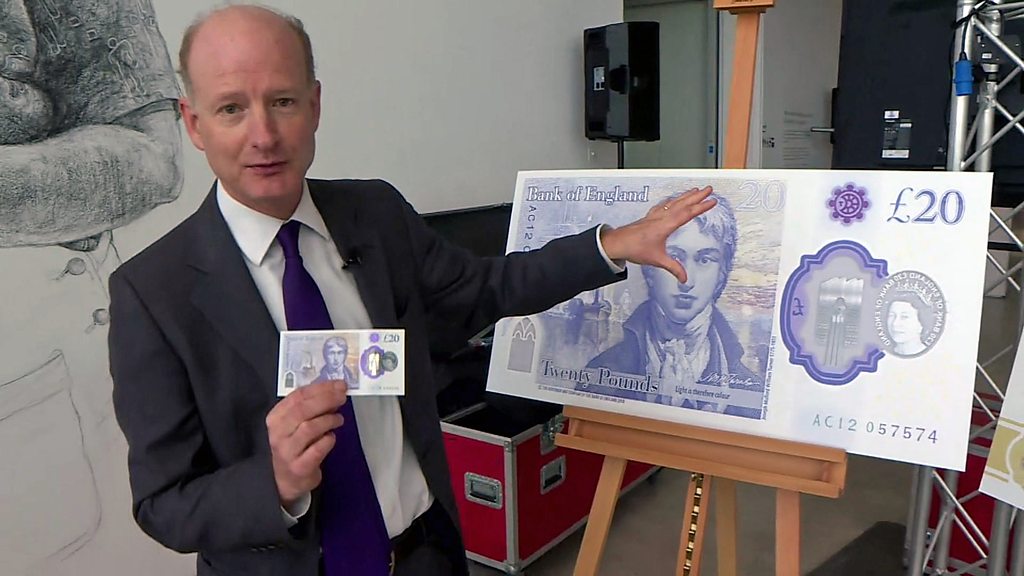 The new design of Britain’s most common, and most forged, banknote has been unveiled by the Bank of England.

Security features on the next £20 note, featuring artist JMW Turner, will include two see-through windows on the note and a metallic hologram.

In the first half this year, 88% of detected banknote forgeries were £20 notes, the Bank’s statistics show.

The new design, which the Bank describes as its most secure, enters circulation on 20 February next year.

Why is the £20 note important?

The most commonly circulating banknote in Britain is the £20 note, with two billion of them in the system.

The popularity of the note is part of the reason for it also being the most likely to be forged.

It has easily been the most commonly forged Bank of England banknote in each of the past 10 years.

The new £20 note will be the first to feature the signature of Sarah John, the Bank’s chief cashier, who said: “The new £20 is an important part of our commitment to providing banknotes that people can use with confidence.

“Our polymer notes are much harder to counterfeit and, with the £20 being our most common note, this marks a big step forward in our fight against counterfeiting.”

The banknote will feature Turner’s self-portrait, from 1799, currently on display in the Tate Britain, and one of his most eminent paintings – The Fighting Temeraire – which can be seen in the National Gallery.

In 2005, the painting – a tribute to the HMS Temeraire in Nelson’s victory at the Battle of Trafalgar in 1805 – was voted Britain’s greatest painting in a poll organised by the BBC.

The quote on the banknote – “Light is therefore colour” – comes from an 1818 lecture by Turner at the Royal Academy, where he first exhibited at the age of 15. His signature is from his will in which he bequeathed his work to the nation.

Bank of England governor Mark Carney said: “As the new Turner £20 testifies, money can be a work of art in everyone’s pocket.”

The note is replacing the current £20 note featuring the economist Adam Smith. Of the five characters on banknotes by the end of 2021, other than the Queen only Jane Austen – who has appeared on the £10 note since 2017 – is a woman.

What is the note made of?

The new £20 note will be the third Bank of England banknote to be made from polymer, following the new £5 note and new £10 note. The next version of the £50 note, to be launched by the end of 2021, will also be polymer.

The theory is that the plastic notes will be more sturdy, such as surviving a spin in the washing machine, and be more resistant to counterfeiting.

Banks in Scotland, Northern Ireland and the Isle of Man have issued plastic banknotes in the past.

How was Turner chosen as the face of the note?

The Bank received 29,701 nominations from the public after it announced it wanted to celebrate an artist on the note. Some 590 eligible visual artists were considered for the honour – about a fifth of whom are women.

The list was considered by a Bank committee, which included independent experts. It drew up a shortlist of five – Turner, filmmaker Charlie Chaplin, sculptor Barbara Hepworth, painter William Hogarth, and designer Josiah Wedgwood – from which the Bank’s governor, Mr Carney, made the final choice of the English Romantic artist Joseph Mallord William Turner, or JMW Turner (1775 – 1851).

He is known as “the painter of light” and described by artist Tracey Emin as a “wild maverick”. The unveiling was held at the Turner Contemporary in Margate, Kent. It was in the town that the London-born Turner, the son of a barber and wig maker, lived and more than 100 of his works were inspired by the East Kent coast.

Who are on other banknotes?

Jane Austen was chosen to appear on the plastic £10 note after a campaign to represent women other than the Queen on English notes.

Computer pioneer and codebreaker Alan Turing will feature on the new design of the Bank of England’s £50 note, to enter circulation by the end of 2021.

A host of different people have appeared on banknotes issued in Scotland and Northern Ireland. Ulster Bank’s vertical £5 and £10 notes entered circulation in Northern Ireland in February.