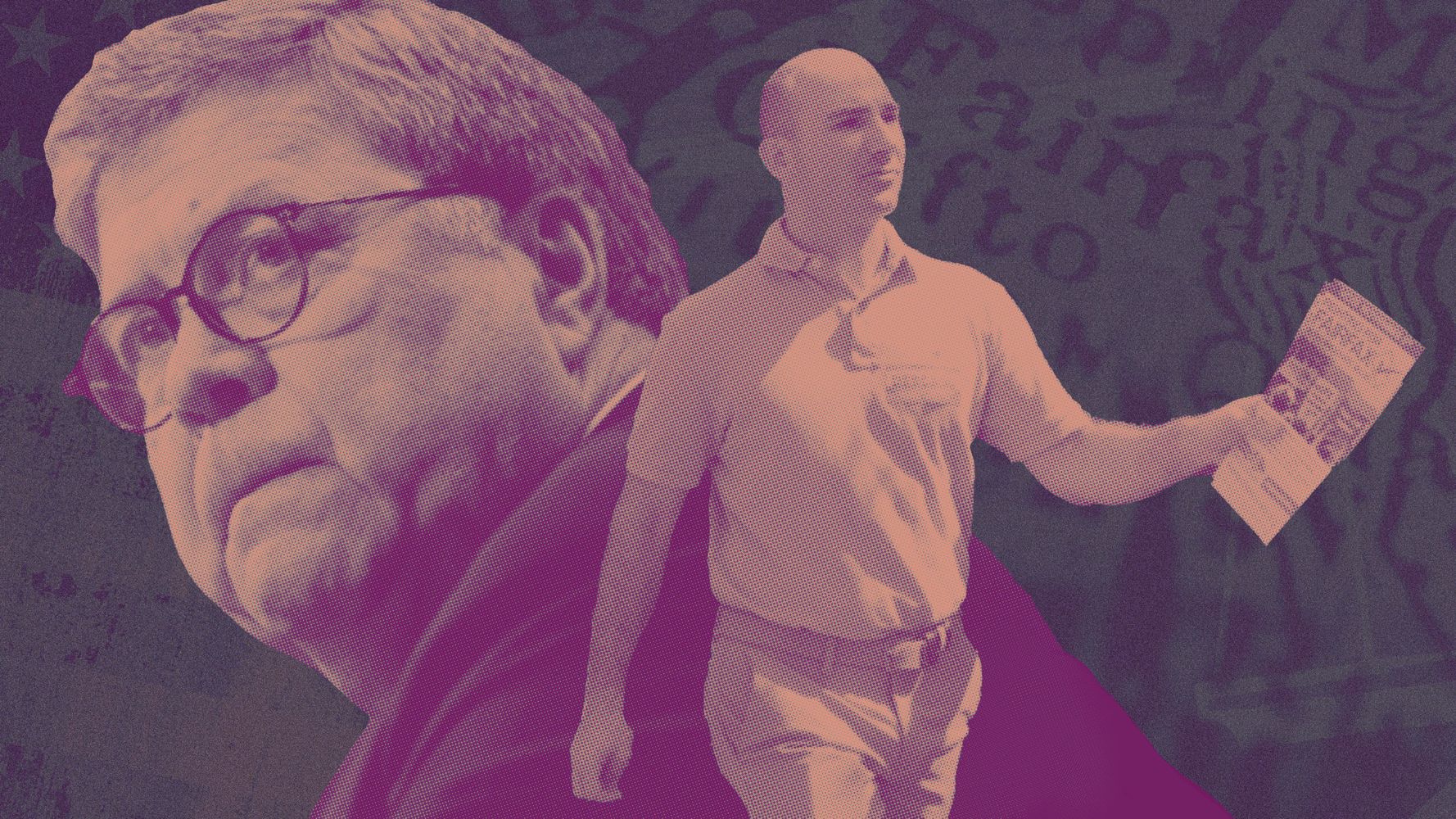 HERNDON, Va. ― Attorney General William Barr said it’s “dangerous to public safety” to elect progressive prosecutors who “style themselves as ‘social justice’ reformers.” Next month, his neighbors in suburban Virginia might do just that.

Steve Descano is the Democratic nominee for commonwealth’s attorney in Fairfax County, where Barr resides. In June’s primary, Descano beat longtime incumbent Ray F. Morrogh, who had not faced a primary challenger since he was first elected in 2007. Morrogh took over the job 12 years ago from his old boss and mentor, who retired after 40 years in the position. To put it another way, just two men had served as Fairfax County prosecutor since 1967, the year the Supreme Court struck down Virginia’s ban on interracial marriage.

Descano will face Jonathan Fahey, an independent who has been endorsed by the Fairfax County GOP, in the general election Nov. 5 ― a test of whether the progressive prosecutor movement Barr warned was taking over in “large cities” can branch out to the burbs.

“Criminal justice reform has taken root in cities. If the movement is to grow and expand, the next step is the suburbs,” Descano said in an interview with HuffPost during a day of canvassing in Herndon, Virginia. He believes his race can serve as a “blueprint” for the criminal justice reform movement outside of major cities.

Descano has a detailed 22-page plan that lays out his priorities, which includes curtailing use of charges the come with mandatory minimums, ending the use of the death penalty, stopping the prosecution of marijuana possession cases, and directing his prosecutors not to seek cash bail.

But when knocking doors in late September, Descano’s quick pitch was pretty simple: He’s the Democrat, while his opponent “used to work for the Trump administration.” Descano’s campaign has branded Fahey a “Trump Lawyer” because he was general counsel for the White House Office of National Drug Control Policy for seven months last year. Fahey, another former federal prosecutor, announced his run as an independent in August after Morrogh’s primary defeat.

Barr’s August speech warned of “anti-law enforcement DAs” emerging “in jurisdictions where the election is largely determined by the primary” where they “ambush an incumbent DA … with misleading campaigns and large infusions of money from outside groups.”

Fairfax County generally votes Democratic, so the primary was indeed important. And Descano’s campaign got nearly a half million dollars by the Justice & Public Safety PAC, which received more than $1 million from billionaire George Soros this year.

But Descano isn’t a shoo-in. Fairfax County may lean blue, but Virginia doesn’t list party affiliation on the ballot for positions like commonwealth’s attorney. And, in an unusual move, current Commonwealth’s Attorney Morrogh also endorsed Fahey over the man who beat him in the Democratic primary, a move which led Rep. Gerry Connolly (D-Va.) and former Gov. Terry McAuliffe to brand Morrogh a “sore loser.” Neither Morrogh nor Fahey’s campaign responded to interview requests.

Barr has not formally weighed in on the race between two former federal prosecutors, and a Justice Department spokeswoman declined to comment on his voting plans. Descano said he’d welcome Barr’s opposition.

“I would wear it as a badge of honor if someone like William Barr would take a swipe at me,” Descano said. “We need people at every level ― at the local, at the state level, at the federal level ― to fight against Barr and what that administration is trying to do.”

“He’s taken a swing at the criminal justice reform movement,” Descano said. “He may not say my name, but I know he’s thinking of me when he takes that swing.”

More voters are waking up to the notion that a “tough on crime” approach to law enforcement “just hasn’t worked,” argued Miriam Krinsky, founder and executive director of Fair and Just Prosecution, a nonprofit that connects progressive-leaning prosecutors across the country.

“There were only two commonwealth attorneys since the mid-’60s on,” Krinsky said. “I think we’re reaching a moment in time where incumbents and elected prosecutors no longer have life tenure in that job. Their feet are going to be held to the fire. The community expects more from them, and people are now more educated from data and what we’ve seen about these smarter ways to think about what we prosecute, if we prosecute, what kind of accountability is appropriate to seek, and how we make communities safer in making those choices.”

“Smart thinking is not limited to urban communities,” Krinsky said. “We’re not seeing these kinds of perspectives and leaders coming to office only in urban areas, or only on the coasts. It’s happening across the country.”

Fahey says he’d “put public safety ahead of politics,” and has attacked Descano’s reliance on Soros.

“The agenda for these George Soros candidates is essentially to delegitimize the entire process,” Fahey said on a September radio show hosted by Trump supporter John Fredericks. “Saying the criminal justice system is inherently flawed and unfair and needs to be fundamentally changed … It’s part of this overall undermining of the entire system that we have, which I think is a great system we should be proud of and always work to keep improving.”

Fahey said that “nobody really even knows about the commonwealth’s attorney all that much in Fairfax County” because because Morrogh’s office had done such a great job and the community was so safe.

Fahey’s reference to Philadelphia alludes to the election of District Attorney Larry Krasner. Trump-appointed U.S. Attorney for the Eastern District of Pennsylvania William McSwain launched a highly unusual attack against Krasner in August, saying that a shooting of six Philadelphia police officers was “precipitated by a stunning disrespect for law enforcement … promoted and championed by” Krasner.

Unlike Krasner, a former public defender and civil rights attorney who filed 75 suits against the Philadelphia Police Department before his election, Descano doesn’t necessarily fit the profile of a criminal justice reform advocate.

“A West Point grad, Army officer, federal prosecutor doesn’t necessarily scream ‘reform,’ right?” Descano joked. But his evolution, Descano said, hasn’t been as sweeping as it might seem, pointing to his roots in South Philadelphia, where he was raised in a row home by parents who didn’t attend college.

“I got to grow up not wealthy, not privileged, at the whims of my dad’s plant being closed down,” he said. “I came from a working-class background. I got to know people who were affected by a criminal justice system.”

So when he was recruited to be part of the prestigious Attorney General’s Honors Program after he got his law degree from Temple University, he says he felt drawn to consumer protection cases.

“I had my choice of what I wanted to do … and the work that appealed to me was the work where the rich and powerful were taking advantage of the poor and vulnerable,” Descano said.

Descano is now running to represent residents of one of the richest counties in America, where he’s lived for the past eight years with his wife and 8-year-old daughter. He’s been endorsed by The Washington Post’s editorial board, but was outraised in July and August by Fahey, who brought in nearly $103,000 compared to Descano’s $52,000. Although most of Descano’s money have come from that Soros-backed PAC, campaign finance reports showing Fahey received a number of donations from Justice Department employees and corporate attorneys.

If he does win, Descano will face the challenge in taking the helm of an office that hasn’t exactly rolled out the welcome mat.

Three current prosecutors wrote in a letter that Descano “ran on a ‘reform’ platform that has taken over in cities such as Philadelphia and Chicago ― jurisdictions that continue to be plagued by a level of crime we want to keep at a considerable distance.” (While Philadelphia’s violent crime rate dropped during Krasner’s first full year in office, the homicide rate rose. But there are likely a variety of factors at play in any increase in shooting deaths: Krasner has pointed to the recent loss of a level 1 trauma center that means shooting victims have to travel further to receive care that could save their life.)

The Fairfax County prosecutors wrote that, under Descano, the office “is certain to lose some if not most of its valuable, experienced prosecutors ― prosecutors who’ve fought hard for crime victims while striving to ensure defendants are treated fairly and respectfully.”

After the primary, Descano tried to reach out to prosecutors in the office through Morrogh, who never responded. So he sent an email to prosecutors on “the future of the office” that thanked prosecutors for their “dedicated service” and tried to ease some of their “uncertainty and trepidation” about their future.

“I respect the hard work and dedication you have shown in service of the county and I would like to discuss your continuing to serve in the office,” Descano wrote in the email to more than two dozen employees.

If elected, Descano said he plans to go in with “open ears” and not run the office “by diktat.”

“If you can row in the same direction as we’re going, I’d love to have you,” Descano said. “I think that a good, a great majority of the people in that office are going to be able to do that, because they are true public servants and they want to fight for safety and justice.”

“The people who don’t see it that way … I don’t think they’ll fit them all in the office,” he said. “The criminal justice system should be reflective of the community, and when the community has spoken, and says they want certain things, it’s our job as public servants to do that.”