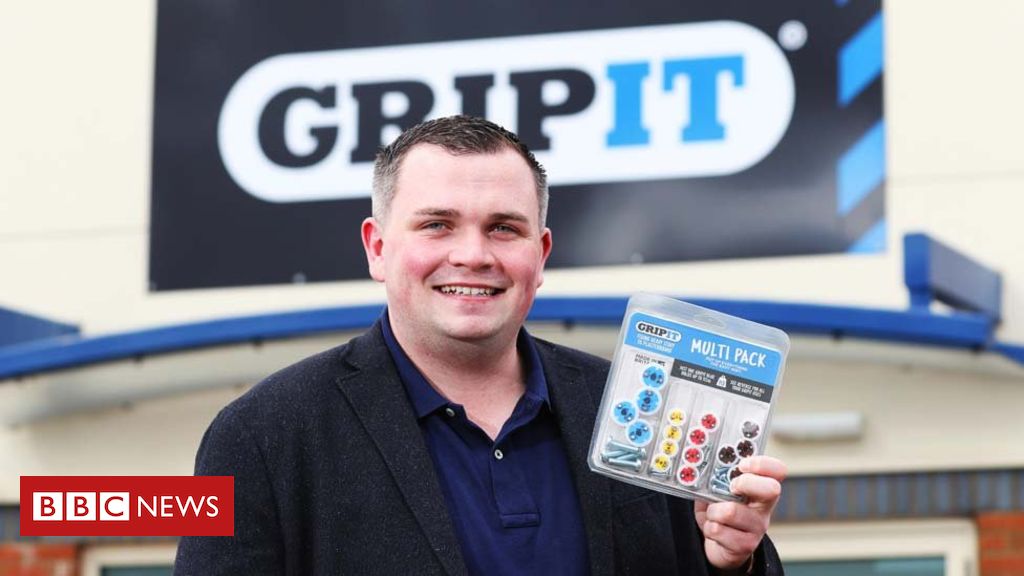 A firm founded by the youngest entrepreneur to secure investment on the BBC’s Dragons’ Den is on the brink of insolvency, the BBC has learnt.

Gripit Fixings makes a product designed to fix heavy items to plasterboard. Its inventor, Jordan Daykin, was just 18 when he appeared on the programme.

Now investors have been told Mr Daykin has left the company and an insolvency practitioner has been called in.

The firm’s board told them it was in “a precarious position”.

Angry shareholders, who stand to lose their entire investment, have been reacting on a forum on the crowdfunding platform Crowdcube, which Gripit has used in the past to raise money.

Some complained they had been misled about the company’s strengths, others that Mr Daykin, who is now 24, had ignored requests for information.

One said: “The company is on its knees and Jordan has left it without any cares. I asked him a polite question on LinkedIn about it this afternoon and he very swiftly blocked me and removed my comment.”

The news first emerged in an update to shareholders from the board and management team, seen by the BBC, which was sent out last week.

It came after Gripit tried and failed to raise £1m in new capital by issuing new shares to existing investors.

Gripit said the funding round had been under-subscribed and was therefore being cancelled.

Mr Daykin patented his product in 2012. He came to prominence when he appeared on Dragons’ Den in 2014 and successfully secured an £80,000 investment for 25% of his company from one of the show’s stars, entrepreneur Deborah Meaden.

Gripit is still listed as an investment on Ms Meaden’s website, where she describes Mr Daykin as someone who “knows his product and its market inside out”.

Ms Meaden confirmed to the BBC that she was still an investor in the company.

She added: “I am pleased that the board and management team have taken quick and responsible action to address the challenges facing the company.

“I will support them in whatever practical way I can as they work towards achieving the best possible outcome for all stakeholders.”

Mr Daykin has also been approached by the BBC for comment.

‘Will not respond to questions’

In January, the company was valued at £22.5m and had raised some £4m from investors. However, at the time of its last fundraising round in September, it was valued at just £6m.

Now its investors face the prospect of losing all their money.

“Without a substantial cash injection, the company is not able to continue to trade into the future or deliver on its growth plans,” said the update from Gripit.

“To this end, the board have secured the advice of an appropriate insolvency practitioner and will examine the company’s options in the coming days.”

Options included a restructuring plan or a sale of the business.

“Rest assured the management team and board will leave no stone unturned to secure a future for Gripit,” the statement said, adding that the company would not be in a position to respond to questions for the next two to three weeks.

When contacted by the BBC, the firm, registered as UK Building Products Ltd, issued a statement saying Steven Wineglass, a director at corporate recovery and insolvency practice Inquesta, was providing assistance to it.

“As a result of a number of specific challenges, the company has identified the need to restructure and is examining the options available to it,” it said.

It said the process could take “a number of months to complete”.