If you have doubts about HBO’s ‘Watchmen,’ give it more time 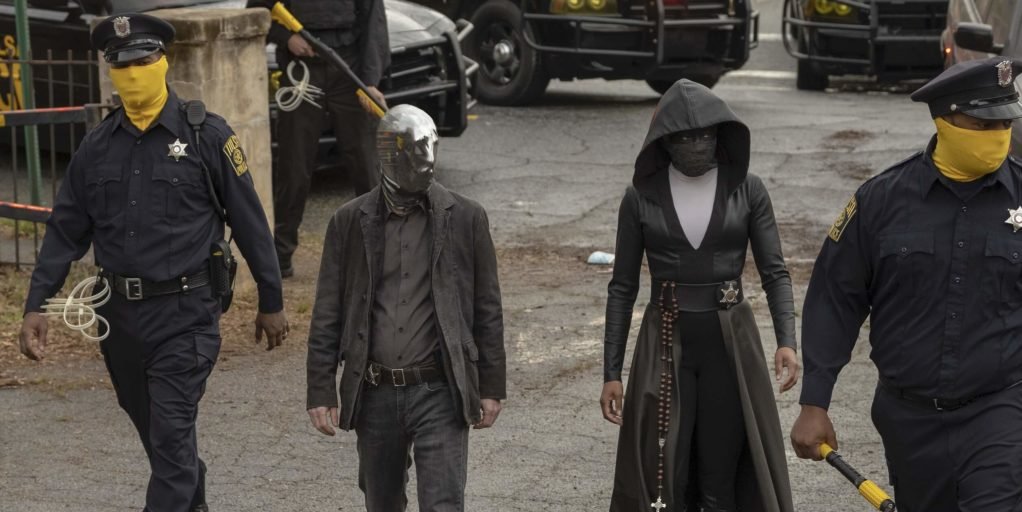 This post includes spoilers for episode 1 of HBOs Watchmen.

HBOs Watchmen gets off to a politically dubious start. Set in an alternate version of contemporary Oklahoma, it presents an eyebrow-raising allegory where local police officers are the mortal enemies of a white supremacist group called the Seventh Kalvary. The conflict is so intense that cops wear masks to protect their identities, with detectives like protagonist Angela Abar (Regina King) maintaining superhero alter-egos.

Hinting at a Blue Lives Matter subtext, this scenario raised a lot of doubts when showrunner Damon Lindelof explained it in pre-show interviews. And while episode 1 has plenty of strengths, it does little to allay concerns about the shows attitude toward race. In fact, the premiere ends with the avuncular white police chief being lynched, his corpse guarded by an elderly Black man in a wheelchair. Its a set-piece designed to inspire controversy. As the camera pans down his body, we hear the song Pore Jud is Daid from the musicalOklahoma!,a darkly comic duet where the hero (Curly) jokingly tells the creepy antagonist (Jud) that if he hanged himself, everyone would realize what a great guy he really was.

This clash between police and white supremacists is the cornerstone of the series, and its why my initial review criticized the shows political world-building. Those first few episodes invite us to sympathize with cops in a story about racism and police brutalitya troubling angle, to say the least. But after watching more, my opinion of the show has changed a lot.Watchmens politics evolve drastically as the show progresses, forcing you to reevaluate what you saw before. HBOs spoiler embargo prevents critics from discussing the details, so all I can say is this:Watchmens true natureis far different than it initially appears. Echoing the nine-panel grid of the comic, this nine-episode season should be judged as a whole, not by one or two segments of a non-linear story.

Even the sarcastic tone of Pore Jud is Daid hints that Chief Judd Crawfords death is more complicated than a simple piece of shock value. Jud was the most misunderstood man in this here territory, croons Curly, later in the song. Thanks to an earlier interrogation scene where Angela Abar beats a suspect to a pulp behind closed doors, we already know that Crawfords police force is far from heroic.

Of course, this mode of serialized storytelling is a dicey proposition. Some viewers may be turned off by episode 1, and I dont blame them. Weve been burned before by superhero comics. Controversial storylines like Marvels Nazi Captain America series are often promoted with plaintive requests to read to the end, which basically translates to the publisher begging people to buy more comics, even if they suck. In this case we have a white male showrunner making a similar request of his audience, backed by critics who arent allowed to say anything more about the show. Its not the most reassuring situation.

I wasnt alive whenWatchmens original 12 issues were published in 1986 and 87, but I can imagine readers going through a similar evolution then.The final issue famously ends with a riff on classic supervillain monologues: Two heroes travel to confront the manipulative genius Adrian Veidt in his lair, where he explains his master plan, only to reveal he executed it all already. Hes transported a giant squid to Manhattan, where its already killed millions of people and created a crisis that ends the Cold War. The heroes are useless, the villain wins, and traditional superhero narratives are revealed to be hollow and meaningless.

HBOsWatchmen differs from the comic on a superficial levelits set in 2019, the characters are different, and its all about racismbut its grander themes are much the same. So is its nonlinear structure. Through flashbacks and later revelations about the alt-history setting, youre likely to have a different view ofWatchmen once youve seen a few more episodes.

Still not sure what to watch on HBO? Here are thebest movies on HBO, thebest HBO documentaries, andwhats new on HBO Gothis month.