Girl allegedly lies about being Indigenous to get scholarship 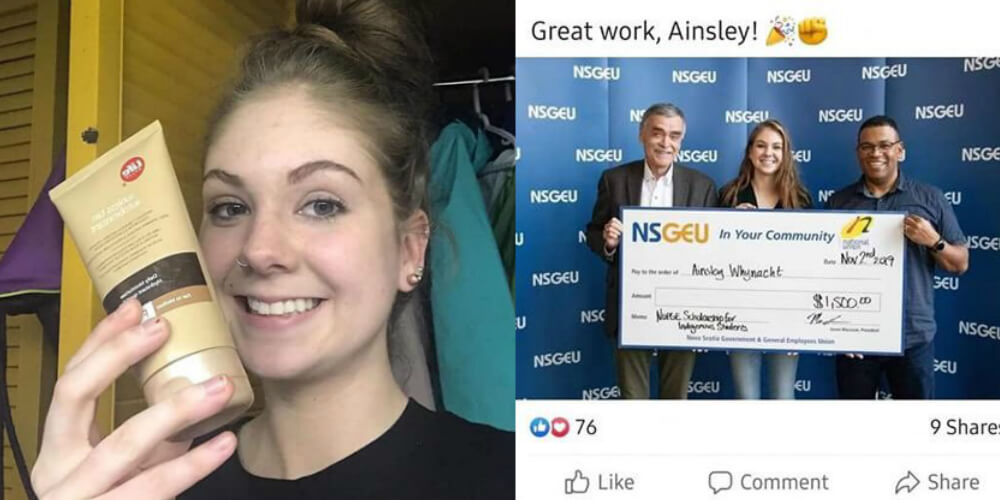 Ainsley Whynacht, a white Canadian student, is facing serious backlash after winning and receiving a scholarship meant for Indigenous students.

In a series of Instagram posts, Whynacht explains that she applied for an aboriginal scholarship by writing an essay about the mistreatment of Indigenous kids at school and won the competition, despite not being Indigenous.

So I applied for an aboriginal scholarship a few months ago n wrote some random essay on treatment of indigenous kids in school and???? I actually got the scholarship?? Good thing they dont have to look at me n noticed Im the whitest person ever, Whynacht allegedly wrote in a since-deleted Instagram post. In another post, Whynacht can be seen posing with abottle of self-tanning lotion.

So turns out I won that scholarship nationally not provincially and like tens of thousands of people over Canada apply for it and Im the third person in 30 years from Nova Scotia to win so I have to do a photo op next Friday?? With one of those giant checks?? So its time for ya girl to fake a tan or else thats gonna be embarrassing asf, she captioned the photo. Shortly after Whynachts posts, the Nova Scotia Government and General Employees Union (NSGEU) posted a picture ofWhynacht receiving theNSGEU Scholarship for Indigenous Students on its Facebook page, along with a long congratulatory message.

Ainsley was awarded the Scholarship for Indigenous Students, with her essay commenting on how the lack of access to public services has negatively impacted the lives of Indigenous people in Canada on reserves. Great work, Ainsley! NSGEU wrote.

People called out the deception on social media.

THIS IS BLATANT THEFT FROM INDIGENOUS PEOPLE Even as a Native person I would never apply for a scholarship like this because I am not enrolled, nor live on a reservation and experience its potential hardships. This is so disrespectful and I hope she gets this taken away, Twitter user @N8VChey wrote, along with screenshots of Whynacht andNSGEUs posts.

THIS IS BLATANT THEFT FROM INDIGENOUS PEOPLE

Even as a Native person I would never apply for a scholarship like this because I am not enrolled, nor live on a reservation and experience its potential hardships. This is so disrespectful and I hope she gets this taken away pic.twitter.com/oOKjtlKUxA

Many were outraged by both Whynacht and the NSGEU for awarding a white student the scholarship.

This is so ugly.

The self tan bottle….. omg. And shes openly posting this online. Omg.

Privilege is a heck of a drug. My biggest surprise here is the outrageous response from @NSGEU . This is just ugly. https://t.co/bkra79qaWv

As a Native person, I felt disgusted, 24-year-old Cheyanne, who shared Whynachts post to Twitter, told the Daily Dot via email. She wrote the essay on the hardships Indigenous people face on reservations, but she contributed to those hardships by basically stealing educational funds for an Indigenous student.

Cheyanne believes some opportunities should be safeguarded for those who experience marginalization or oppression as a result of their heritage.

As a Native woman who isnt enrolled or lived on a reservation, I understand some things arent for me and I would never apply for a scholarship like this, she explained. I carry more privilege than my darker skinned relatives and those who have experienced racial injustices or hardships living on a reservation. It wouldnt be right.

NUSGE released a statement on Facebook, addressing the revelation.

We are aware of the social media posts circulating about the recipient of the NUSGE Scholarship for Indigenous Students, this information has been passed on to the National Union, NUPGE, who administers this award, so they may investigate this matter further. Its unfortunate that people say offensive things on social media that they end up regretting, NUSGE wrote on Facebook.

NSGEUs response came off as a brisk we arent really going to do anything, but heres a post to make you think we are, Cheyanne explained. When they talked about it being unfortunate that people say offensive things on social media, they were probably referencing those who were calling her out. I think its unfortunate that they give Indigenous scholarships to people who arent indigenous.

Update 2:03pm CT, Nov. 11: Whynachts mother has directed the Daily Dot to a statementthe student made to Global News Canada, in which she says she is Indigenous herself but takes ownership of the posts and apologizes for them.Whynacht says they were private and intended for friends only.

The colour of my skin does not erase my heritage, or my anger towards their treatment that I wrote very passionately about in the essay that won me this scholarship. Even the suggestion that I would fake my ethnic background is truly insulting for me and is just another example of people not taking my ancestry seriously just because I do not exactly look the role, as I have been told.