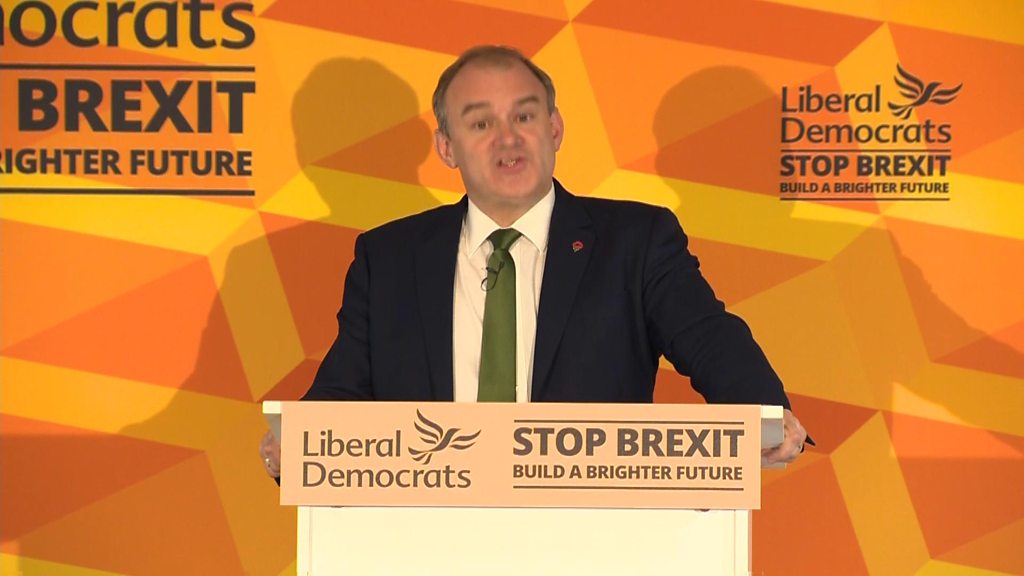 A Liberal Democrat government would spend £100bn tackling the effects of climate change and protecting the environment, the party’s deputy leader has announced.

The pledge would be funded through borrowing and tax changes, to be set out in detail in the party’s manifesto.

The Conservatives and Labour both have targets to reduce carbon emissions.

Sir Ed, who served as secretary of state for energy and climate change in the coalition government, said his party would “decarbonise capitalism” if elected.

He said a Lib Dem administration would be a “government of business” by stopping Brexit, increasing investment in infrastructure, and promoting new green jobs.

Speaking in Leeds, he also pledged his party would build a new tram or metro system in the West Yorkshire city.

“This will fast track deployment of clean energy, to make Britain not just the world leader in offshore wind, but also the global number one in tidal power too.

“And we will invest £15bn more to make every building in the country greener, with an emergency ten-year programme to save energy, end fuel poverty and cut heating bills.”

The party said the policy would be funded through £85bn of borrowing and £15bn raised through tax changes, which will be detailed in its manifesto.

“Fantasies born of nostalgia for a British Imperial past. Competing with fantasies from a failed 1970s ideology.”

He said his party would not do any kind of deal with Mr Johnson or Mr Corbyn if no party wins a majority on 12 December.

But he said they would vote “issue by issue” with a minority Conservative or Labour government, in an effort to make them more “moderate”.

“What we will not do is have a coalition or have a supply and confidence relationship, because we think these parties have become too extreme,” he said.

He also repeated his claim that stopping Brexit would deliver a £50bn “Remain bonus” for public services, due to better economic growth.

BBC Reality Check correspondent Chris Morris said the vast majority of forecasts do expect the economy would be bigger if the UK were to stay in the EU.

But he added the size of that “bonus” cannot be predicted with any certainty, and £50bn was not a hugely significant amount in terms of overall government expenditure.

The Lib Dem climate pledge follows the Green Party’s promise to appoint a “carbon chancellor” to allocate £100bn per year towards climate change.

Labour has announced it would make all new-build homes “zero carbon” by 2022, as well as reducing the UK’s carbon emissions by 10% through a huge home improvement programme.

The Conservatives have announced a halt to fracking, the controversial process of extracting gas from shale rock, and, in government, the party set a target of “net-zero” carbon emissions by 2050.

Labour, the Lib Dems, the Scottish National Party and the Green Party have called for a live TV debate on climate change before the 12 December election.