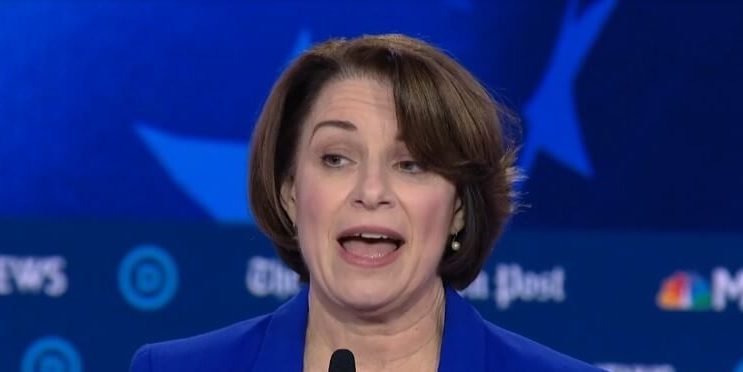 For candidates like Sen. Amy Klobuchar (D-Minn.), tonights fifth Democratic presidential debate is a critical opportunity to climb up in the polls. One of the best ways to do that is by delivering a memorable sound byte.

Roughly 30 minutes into the two-hour-long debate on MSNBC, Klobuchar seized her moment while making a point about campaign finance.

Im someone that doesnt come from money right now we have a system that isnt fair, she began.

Klobuchar continued to say that, if elected president, she would work to pass a constitutional amendment to overturnCitizens United, the widely criticized U.S. Supreme Court case that opened the door to endless amounts of corporate and dark money in politics.

After noting that, without gerrymandering and voter roll purges, Stacy Abrams would be governor in this state right now, Klobuchar talked about fundraising for her first Senate campaign.

I literally called everyone I knew and I set what is still an all-time Senate record, she said.

I raised $17,000 from ex-boyfriends and Id like to point out it is not an expanding base.

Listen all critical opinions about Amy Klobuchar aside, getting your ex boyfriends to give you $17,000 is big dick energy

No one:
Not a single soul:
Still no one:
Klobuchar: I HAVE EX BOYFRIENDS #presidental #ncdsapgov

Senator Klobuchar has gotten some laughs saying she has broken a fundraising record getting donations from ex boyfriends. She also asked everyone to play a game naming their favorite female president. #DemDebate

source: amy klobuchar is my ex girlfriend and i gave her $17,000 pic.twitter.com/Yg3GIxEQaY

Klobuchar just said in my first campaign, I set a senate record. I raised $17,000 from ex boyfriends

Amy Klobuchar telling the anecdote about raising 17k from ex boyfriends is the best thing Ive heard in this debate.

Klobuchar remains down in the polls, but her stock is going up on social media.