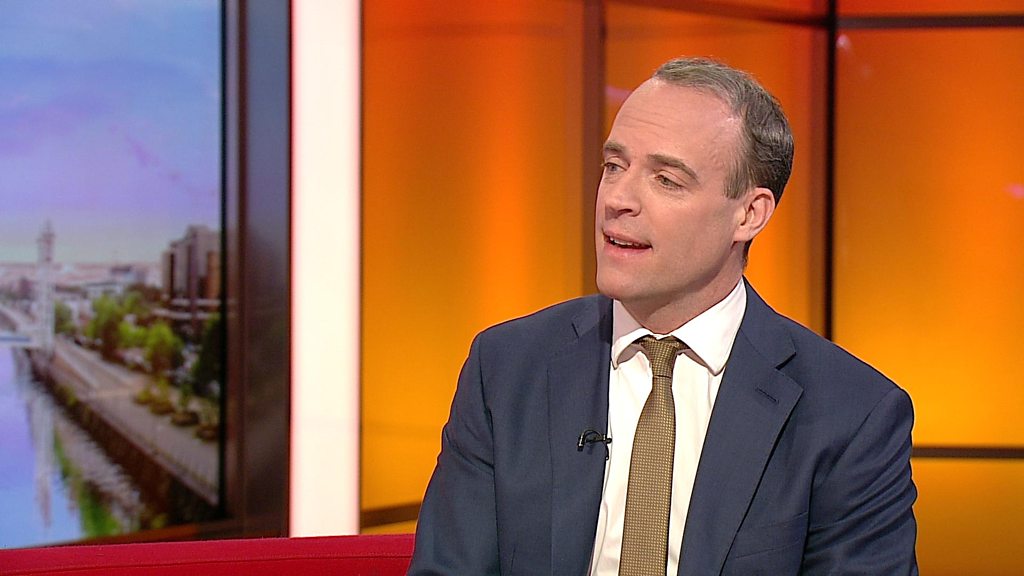 Senior Tories have dismissed criticism of the rebranding of one of their Twitter accounts as a “fact-checking” site during the leaders’ debate amid claims it deceived the public.

The @CCHQPress account – the Tory press office – was renamed “factcheckUK” for the duration of the hour-long TV show.

Foreign Secretary Dominic Raab said “no-one will have been fooled” and they had the right to rebut Labour’s claims.

But the Lib Dems urged the Electoral Commission to intervene.

In response, the watchdog said it did not have the powers to do so but it urged the parties to act with transparency and integrity.

Twitter rebuked the Conservatives, saying it would take “decisive, corrective” action if something similar happened again.

During the ITV debate between Boris Johnson and Jeremy Corbyn, the first ever televised head-to head encounter between Tory and Labour leaders, the party’s press account changed its name and its appearance, telling people it was “fact checking Labour from CCHQ”.

Its Twitter handle remained the same and it retained the blue tick – signalling that it is a verified account.

Mr Raab defended the move, which has attracted widespread criticism from non-partisan fact-checking bodies, telling the BBC “no one gives a toss about social media cut and thrust” and were only concerned about the substance of the arguments.

“It was pegged to CCHQ,” he told BBC’s Breakfast. “No-one looking at it for a split second will have been fooled – they can see it’s from CCHQ.”

He said there was “huge scepticism” among the public about what politicians were saying and the Conservatives had a right to set the record straight over “nonsense” claims the NHS would be “up for sale” if they won.

“It matters that we have an instant rebuttal mechanism,” he said. “We want to make it clear that we are holding Labour to account for the nonsense they systematically and serially put on the Conservatives.

“The reality is, voters will make of the competing claims what they will. What we’re not going to do – we won’t put up with nonsense that the NHS is up for sale being put up by Jeremy Corbyn.”

Conservative Party chairman James Cleverly, who is responsible for the party’s digital campaigning team, said he was “absolutely comfortable” with the move – saying the nature of the site was “clear”.

Twitter is a minority interest. Journalists are over-represented on this platform compared to other social media, creating a profound danger that they misinterpret what happens on Twitter as representative of the wider world.

Nevertheless, an important threshold has now been repeatedly breached by Britain’s party of government, and Twitter is the site where it happened.

It is perhaps arguable that, like the doctored video of Sir Keir Starmer a fortnight ago, the re-branding of CCHQ as a fact-checking service falls into the broad category known as satire.

But that is a stretch. The effect will have been to dupe many unknowing members of the public, who genuinely thought it was a fact-checking service when it gave opinions on Jeremy Corbyn.

This is not to patronise voters, who are wise; rather, it is to recognise that in a world of information overload, what cuts through are stunts.

Which is why, ironically, in CCHQ this morning there will be younger staff who chalk this up as a victory.

Journalists thus face a dilemma: call out disinformation, and you play to the worst of social media, distracting from questions of policy; but ignore it, and the truth recedes ever further from view.

A senior Labour politician said Twitter should have taken much stronger action.

And Lib Dem education spokeswoman Layla Moran said in the “fast-moving” world of social media, many people would have been duped.

“I reported them and blocked them as soon as I saw it. Absolutely this needs to be reported to the Electoral Commission.”

But the elections watchdog said its remit only extended to policing campaign finance rules, not information put out by the parties.

“While we do not have a role in regulating election campaign content, we repeat our call to all campaigners to undertake their vital role responsibly and to support campaigning transparency,” a spokesperson said.

“Voters are entitled to transparency and integrity from campaigners in the lead up to an election, so they have the information they need to decide for themselves how to vote.”

Twitter has policies regarding deceptive behaviour on the platform. It can remove an account’s “verified” status if the account owner is said to be “intentionally misleading people on Twitter by changing one’s display name or bio”.

In a statement, the US company said: “Any further attempts to mislead people by editing verified profile information – in a manner seen during the UK election debate – will result in decisive corrective action.”

“Polluting that information space by pretending to provide independent fact-checking information when what you are doing is providing party lines, many of which were not accurate, is doing voters a disservice,” its chief executive Will Moy told the BBC.

The BBC has its own fact-checking team, Reality Check which looked at claims made by Boris Johnson and Jeremy Corbyn during the debate.

During the programme, both leaders said they were committed to upholding the truth during the campaign.

In response to the move by the @CCHQPress account, a number of celebrities re-branded their verified accounts, including Black Mirror creator Charlie Brooker who changed his account to mimic factcheckUK, as did The Thick Of It and Veep creator Armando Iannucci.

But Royal Family actor Ralf Little said he had been suspended from Twitter after changing his account to mimic the Conservative Party press office.

He changed his name to “Conservative Party Press Orifice” and the description to “Not a fact checker. Or the Conservative Press Office”.

He told LBC’s James O’Brien it was “fine” that he was suspended “but only if the @CCHQPress account is suspended for the same thing”.

This episode comes less than a month after the Conservative Party was criticised for posting a “doctored” video involving Labour’s Sir Keir Starmer, in which the shadow Brexit secretary was made to look as if he met a question, posed by ITV’s Piers Morgan, with silence.

Conservative Party chairman James Cleverly said the video, since taken down, was meant to be “light-hearted”. The party later posted an extended version of the interview.