Thousands of UK firms may face debt over ad deal 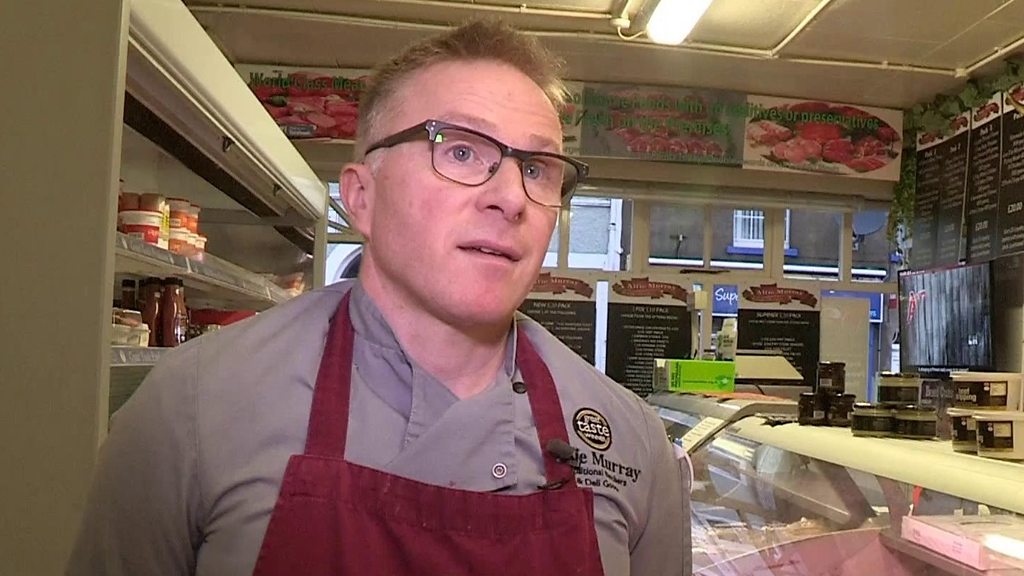 Some 1,500 UK firms have signed up to advertising packages which could leave each at least £10,000 in debt.

In June, advertising screen supplier Viewble Media UK Ltd, which was based in Bangor, County Down, went bust after being linked to an alleged scam.

It had signed up businesses to lease screens that would be paid for by adverts on them.

But they were contracted to make the lease payments, even if the adverts were not making them money.

Business owners signed a three-year deal, in which they agreed to pay £299 a month on the understanding they would be compensated by the sale of adverts for other businesses.

How did the scheme work?

The paperwork was completed for the business owners; in most cases they just had to give a digital signature on an iPad.

Affected businesses have told BBC News NI they did not realise that as part of the paperwork they had signed, they had agreed to finance deals worth almost £11,000 per screen, which they would have to pay regardless of whether they were making any money from ad sales.

Finance was arranged on behalf of the business owners, many of whom were unaware of the small print in the contract pointing out they would be liable if anything went wrong.

Most businesses did initially receive some payments from the advertising, but these stopped when Viewble Media collapsed in June.

Directors of the company say they paid another company, Rhino Media Group (RMG), to take over their clients.

RMG took over Viewble’s office in Bangor, County Down, retained some of its staff, and said it would start to pay businesses back.

But now RMG has contacted its customers saying it will no longer be able to make the repayments unless it manages to sell any more ads.

Who signed up for the deal?

Raj Singh and his family employ 15 people in three convenience stores across Sunderland and Tyne and Wear.

They leased five advertising screens for their shops, for which they are paying £1,500 a month – £55,000 in total over the course of the finance agreement.

“It is absolutely crippling, to pull that amount out on a monthly basis,” said Mr Singh.

“At present we are £3,000 down, but if this continues there is no way our three businesses will be able to cope.

“We are running on a shoe-string budget, but to be losing that much it would cripple us.”

Faye Coles, who runs a travel agency in Chobham, has one screen in her shop and says many companies in the Surrey area signed up to the advertising scheme.

“A payment of £11,000 is a huge kick to us,” she said. “It means I’ve had to place on hold any scheduled advertising plans I have… because I can’t afford to pay out.”

Customers can no longer contact RMG, which has laid off all its staff and closed its Bangor office.

Businesses upset about the finance deals have asked for help with repayments – but the contracts appear to be legally binding.

Some businesses have cancelled their direct debits, while others have appointed solicitors to review the terms of their agreements.

“We’re just not getting any advice from anybody,” said Ms Coles. “No government bodies are out there to help us. I don’t know where else to go.”

Alfie Murray’s family butchers in Killyleagh, County Down, is one of the many businesses which has cancelled its direct debits to the finance companies.

“There are a few of us who have got together, we are going to take the finance companies and show them that they can’t walk over small business owners,” he said.

The Federation of Small Businesses has been advising affected businesses.

It said the government has failed to grasp the scale of the problem and should set up a task force to deal with the issue.

“We’ve been working with the police, the small business commissioner and others,” said the FSB’s Mairaid McMahon.

“While they are all very sympathetic to the plight of these businesses, it seems that none of them have sufficiently wide powers to intervene on their behalf.

“We would like to see all of those parties and government departments get around the table.”

RMG said there had been clear communications with customers at the point the screens were sold and that the documents customers signed were marked as loans.

RMG added it was going to work to remove the burden of lease payments from customers if it secured further funds.

Have you or your business been affected? If you have you can contact us: haveyoursay@bbc.co.uk.