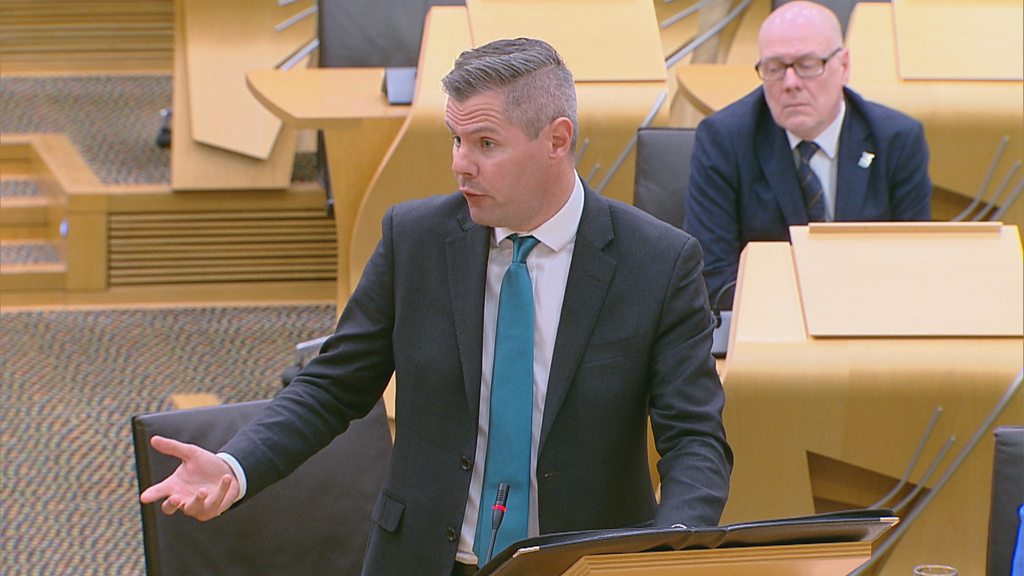 UK government plans for a March budget are “disrespectful to devolution” and could have “profound consequences” for Scotland, Derek Mackay has warned.

Chancellor Sajid Javid has announced he will set out his tax and spending plans on 11 March.

Scottish ministers want to see these plans before drawing up their own, but will now have little time to do so.

A date for the Scottish budget will be announced in due course, with Mr Mackay in talks with other parties and the Scottish Fiscal Commission about how to respond to these “exceptional circumstances”.

Mr Mackay was originally due to set out his budget plans on 12 December, but that was delayed because of the snap general election which was held on that date.

He wants to see the details of Mr Javid’s budget before he sets out his own plans, given the impact of UK finances on the Scottish budget.

He added: “This is really disrespectful to devolution, to Scotland’s parliament and people, in setting a UK budget so late.

Mr Mackay added: “The failure of the UK government to publish its budget at an earlier time means we do not have clarity on the funding available for our schools, hospitals and other vital public services. Despite this, we remain focused on introducing a Scottish budget for 2020-21 at the earliest practical opportunity.”

During Treasury questions at Westminster, Mr Javid was accused by SNP Treasury spokeswoman Alison Thewliss of giving “absolutely no thought to Scotland at all”.

The Chancellor replied: “In the election we’ve just had we talked time and time again about the need to unleash the entire UK, and of course that includes all of Scotland.

“Where Scotland has been let down time and time again is by the SNP government – which is giving Scottish people the highest taxes in the UK and the worst set of public services.”

A Treasury spokesman later added: “Nothing stops the Scottish Parliament from passing their budget before the UK budget. We are working with the Scottish government as part of an agreed process to provide the information they need to prepare their budget.”

Why is the UK budget so important to the Scottish one?

Despite fiscal powers including income tax being devolved to Holyrood, the UK budget process still has a huge bearing on the Scottish one.

To start with, how much the UK government spends on each department has implications for the block grant – the package of funding allocated to Holyrood via the Barnett Formula.

The forecasts of tax revenues from the Office for Budget Responsibility – which come out alongside the budget – also have a bearing on the block grant, as they form part of the calculations underpinning the devolved tax system.

There is also the issue of the gap between the Scottish and UK tax systems – if Mr Javid decided, for example, to cut the higher rate of tax, Mr Mackay would have to decide whether to follow suit, or widen the gulf between what higher earners pay north and south of the border. He contends that he cannot make an informed decision until he has seen the full picture.

What’s the process at Holyrood?

Unlike at Westminster, there is actually a hard deadline on the Scottish budget process – the end of the current financial year.

Unless a “rate resolution” setting out income tax rates and bands is passed by 1 April, the devolved income tax system ceases to apply.

The rulebook as it stands doesn’t provide for this happening. The Chartered Institute of Taxation says it would see Scotland “effectively foregoing its ability to set its own income tax rates”.

There are other practical hurdles too, such as drawing up and passing a Budget Bill. Normally this process stretches out over a period of months, with each Holyrood committee carrying out scrutiny of spending on their particular portfolio and MSPs holding debates in the chamber.

This year, the parliamentary part of the process might have to be pushed through in a matter of days – leaving little time for scrutiny or deal-making between parties.

Don’t councils have to set tax rates too?

Mr Javid’s chosen date for his budget, 11 March, is also the legal deadline for Scottish councils to set their local tax rates.

She added: “This significantly impedes the ability for local authorities to formulate their own budgets, meaning Scotland’s communities are disadvantaged”.

Glasgow City Council leader Susan Aitken said the UK government “has given not a single passing thought to Scottish public services”, while Dundee’s John Alexander said the timing was “beyond ridiculous”.

How could this be resolved?

It is theoretically possible for Mr Mackay to set his budget before the UK government one comes out, although the Fraser of Allander Institute think-tank has called this approach “risky” given the potential for last-minute changes.

The UK government has insisted that it can give Mr Mackay enough information to set his budget any time he likes. He replies that there has been “absolutely no engagement” to make this possible.

Ultimately the deadline of the tax rate resolution means the matter must be settled by the end of March, but Scottish government officials point to the March 11 deadline for councils as equally important.

They are considering a range of possible responses, including potentially changing the law to give councils more time to set budgets.

There could be a middle route, where the Treasury gives Scottish officials enough ballpark information to draw up the bulk of their plans. This could in turn be passed on to councils, so they can set their tax rates, with the formal work of actually passing the budget bill at Holyrood put off until after Mr Javid makes everything official in March.

However, the truncated timetable will also add extra pressure to the annual issue of whether the minority SNP administration can strike a deal with opposition parties to actually pass a budget bill.