Did Britain meddle in a US presidential election? 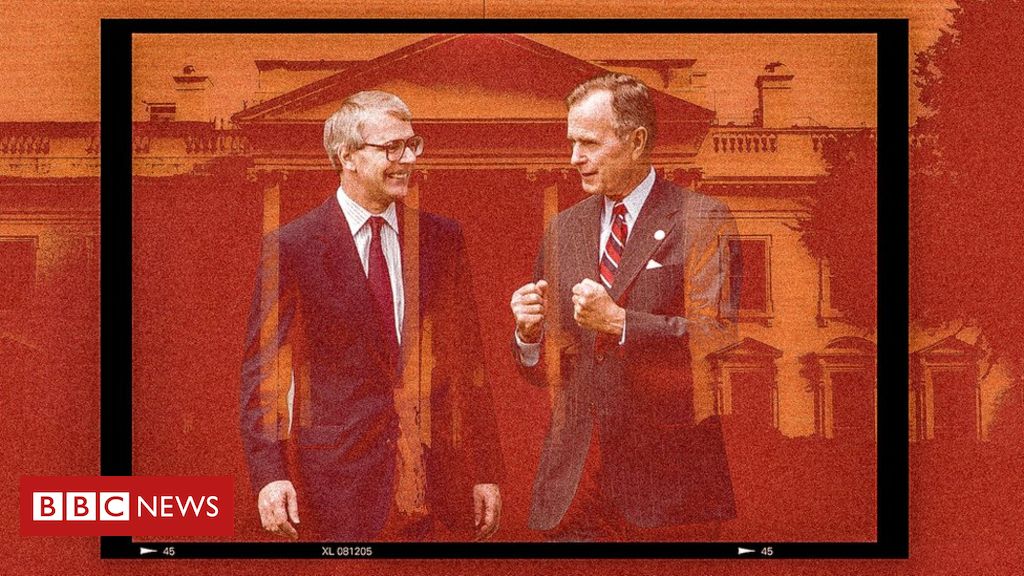 When US President George HW Bush craved “a smoking gun” in 1992 to politically kneecap his White House challenger Bill Clinton, the British government delved into its files for damaging information. So, did the Bush camp solicit foreign interference to help him win an election – the allegation that has seen President Trump impeached?

“A guy like that doesn’t deserve to be president,” President Bush told his sister about Clinton.

He viewed the young Arkansas governor, who was the same age as Bush’s eldest son, as a scoundrel and felt confident he could roll over him.

But the president sorely underestimated Clinton, an adversary so politically gifted that his ascent to the White House had been foreseen when he was aged just seven by his school teacher.

To Bush’s mystification, his saxophone-tootling challenger’s popularity in opinion polls was even defying the gravity of revelations about his draft-dodging past.

The Republican, a decorated World War 2 fighter pilot, dictated to his diary: “I’m tired of this guy lying and ducking on the draft and not coming clean.”

Bush had another problem – his campaign was as stale as the recession-sapped US economy.

So he turned for inspiration across the Atlantic to his friend, UK Prime Minister John Major.

The British premier’s come-from-behind general election win in April 1992 was being touted by American conservatives as a blueprint for the US president.

Bush had a very special relationship with Major, his brother-in-arms from the 1990-91 Gulf War, as has previously been revealed in transcripts of their private conversations obtained by the BBC.

He once spoke of sending him “a love letter” and assured the British PM “obviously we’re rooting for you” to beat Labour Party leader Neil Kinnock.

Two UK Tory panjandrums – architects of the PM’s surprise victory – flew to Washington eight weeks before the US election and advised the Bush team to focus attacks on Clinton’s character.

The president’s campaign hired an opposition research specialist to dig for dirt in Britain.

What happened next was either a bureaucratic mishap, or an egregious act of political meddling by the UK in the internal politics of a friendly nation.

At some point in early October 1992, the Home Office inspected its immigration nationality section to see whether Clinton had applied for British citizenship while at Oxford University from 1968-70 in order to escape the Vietnam draft.

Briefing reporters on background, the department said its “comprehensive” check was conducted out of “sheer helpfulness” to the media, even though it usually always rebuffed journalists with the stock answer that it did not discuss individual cases.

Nothing compromising on the Democrat was discovered, though it remains an open question how any such political bombshell, had it been excavated, would have been handled by Whitehall.

That same month, a frustrated Bush would dictate to his diary that “we cannot get this smoking gun on Clinton”.

More on US presidents

All Major could offer him were well wishes.

The British premier called Bush on Air Force One during a last burst of campaigning two days ahead of November’s election.

“I wanted to wish you a great hurrah and all of my best for the home stretch,” Major said, according to a transcript of their conversation at the Bush presidential library in Texas.

But he had backed the wrong horse – Clinton trounced Bush.

Returning to the White House a day after he lost, the humiliated one-term president grew emotional, according to biographer Jon Meacham.

Bush dictated to his diary that he was thinking to himself: “How in God’s name did this country elect a draft dodger?”

A month later, when the Home Office publicly acknowledged having carried out the file check, the victorious Clinton did not hide his annoyance.

“They should have more pressing business,” he said of British officials when asked about the controversy during a morning jog in Little Rock, Arkansas.

That very same day, 6 December 1992, Major wrote a letter of apology to the US president-elect.

According to a copy of the correspondence, declassified only last year by the UK National Archives, the British premier said he was “disturbed by reports which have appeared about enquiries by our Home Office relating back to your time at Oxford”.

“I am only sorry,” Major added, “that it has been played up now in a mischievous way. I hope the mischief will be short-lived.”

There is no indication that Clinton responded.

Later that month, Major flew to Washington on an official working visit. He had hoped to mend fences with the president-elect during the trip.

But Clinton declined to meet him – the Washington Post described it as a snub.

With the so-called special relationship on ice, Labour MPs jeered the prime minister in the House of Commons in February 1993 as he denied taking sides in a US election.

Margaret Beckett, the opposition’s deputy leader, was among members of Parliament who shook her head sceptically at Major’s explanation.

“No I didn’t buy it,” the MP for Derby South tells the BBC, remembering that day in the chamber 27 years ago.

“I thought at the very least there must have been a nod and wink [between the US and UK].

“And probably a bit more than a nod and a wink, ‘if you can find something, George [HW Bush] might be rather grateful’.

“Because it [the Home Office records search] seemed to me like the kind of thing most civil servants would be fairly wary about doing.”

Whosever idea it was, Beckett says, it was “quite a big mistake”.

In a statement to the BBC, Major – now a knight of the realm – denied approving the Home Office file search.

“However, Sir John neither sanctioned, nor had any knowledge of, Home Office checks being carried out on George Bush’s Presidential rival Bill Clinton.”

No-one in the Bush camp set any UK official to go rummaging for such skeletons in Clinton’s closet, insists Charles Black, who was a senior adviser to the president’s re-election bid.

“I’m pretty confident that nobody in the campaign asked for it,” he tells the BBC.

“It didn’t come up in the meetings I had with the [UK] Conservatives, so maybe somebody in the [US] government did.”

The two top Tory apparatchiks who flew to Washington were Sir John Lacy and Mark Fullbrook. Lacy died in 2009 and Fullbrook declined to comment to the BBC.

James Pinkerton, who was deputy assistant to Bush and worked on the campaign, thinks his former boss’ hands were clean.

“Bush was an ethical, honest guy,” he tells the BBC, “and if you said to him, we’re going to do a dirty trick to help you win, he would’ve said, no.”

But despite his reputation for civility and decency, “the last gentleman” – as Bush’s admirers call him – did not always measure up to the ideal of noblesse oblige.

In his political life, he was fully prepared to fight dirty to win, as evidenced by the infamously race-baiting attacks he launched in 1988 to tar his then-Democratic challenger, Massachusetts Governor Michael Dukakis, as soft on crime.

Bush effectively blamed his rival for the torture and rape of a white couple by a black felon, Willie Horton, who had failed to return to prison after being allowed out on a weekend-release programme.

And as Ronald Reagan’s deputy, Bush blatantly lied when insisting he was “out of the loop” on the administration’s secret effort to trade arms with Iran for hostages in violation of its own policy.

“I’m one of the few people who know the details,” the vice-president had confided to his diary.

George Herbert Walker Bush – who died one year ago, aged 94 – was an intensely competitive man.

In 1980, as his dream of capturing the Republican presidential nomination began to slip away in the wake of defeat to Reagan in New Hampshire, Bush penned a revealing note to himself on a flight.

“I WILL NEVER GIVE UP. NEVER. NEVER,” it said in bold scrawl. He gave up three months later.

Sidney Blumenthal, a historian and former Clinton White House aide, tells the BBC that “of course” the Home Office files search was done at the behest of the British government in cahoots with team Bush.

He notes that former Bush chief of staff James Baker – who declined to speak to the BBC for this article – stated in a 1992 memo, cited recently by the New York Times, that the commander-in-chief would not have enlisted the UK to aid his campaign.

“And yet somehow the Home Office went ahead,” Blumenthal archly adds. “Hard to believe that they [the British government] would do this entirely unbidden.”

The UK action might be dismissed as the suspected rogue meddling of an over-zealous ally, except that it was mirrored by a simultaneous muck-raking exercise within the Bush administration.

Just as the Republican president was making an issue of his rival’s past opposition to the Vietnam War, a government warehouse in suburban Maryland was being scoured for damaging information on Clinton, and even his mother.

This scandal came to be known as Passportgate.

A stinging Department of State inspector general report would later implicate two Bush political appointees in having Clinton’s documents unsealed. It was a fruitless bid to find out if the Democrat had ever considered renouncing his US citizenship during the Vietnam conflict.

While the watchdog did not establish the White House had directly instigated the invasion of privacy, it found Baker was aware of the “heinous activity”, yet did nothing to stop it.

Baker was cleared three years later of any “criminal intent” in the matter by an independent counsel investigation set up under then-and-current US Attorney General William Barr.

Beyond the suspicions, no concrete proof has emerged of collusion between Bush and Major in the US election of ’92.

But even if there was, isn’t what President Trump allegedly did – brazenly soliciting the interference of a foreign government, Ukraine, to harm the election prospects of his potential White House challenger, Joe Biden – worse?

Not under US campaign finance law, according to Ann Ravel, former commissioner of the Federal Election Commission.

It is illegal for anyone to seek or accept anything of value from a foreign national in an American election, she points out.

Ms Ravel, who led the federal regulator in 2015, tells the BBC: “It would be the equivalent of what we’re seeing now [with Trump] because obviously it would be a request by the Bush White House for what is something of value to the campaign.”

Though so much about the Trump presidency is said to be unprecedented, foreign interference in elections – with the occasional connivance of unscrupulous US office-seekers – is as old as the American republic itself.

As he pursued his own political ambitions, Founding Father Thomas Jefferson enabled outrageous French meddling in US internal affairs.

When President George Washington infuriated Paris by forging a peace treaty with Great Britain in 1794, Jefferson briefed against his commander-in-chief to the French ambassador, who was trying to wreck the accord.

As vice-president to John Adams in 1797, Jefferson was suspected of treason when he undercut his boss by sabotaging Franco-American peace talks, again via diplomatic back channels.

How prescient that a decade earlier Adams had written to a friend in France: “As often as Elections happen, the danger of foreign Influence recurs.”

That letter was addressed to Jefferson.

More on US presidents