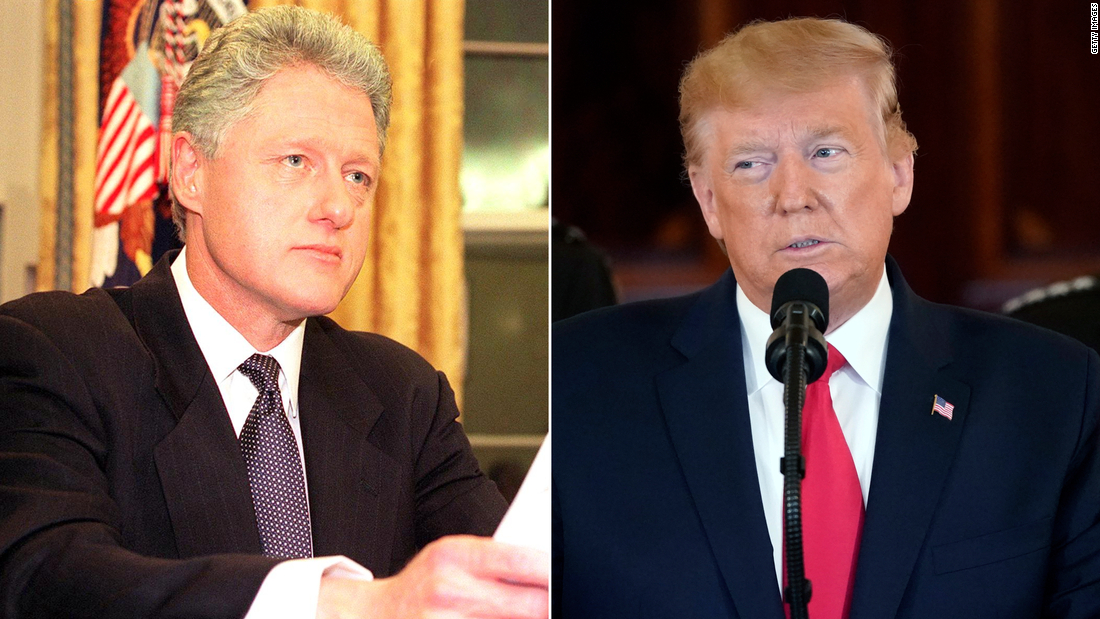 (CNN)A President impeached at home and using lethal force abroad. Threats of a nuclear program in the Middle East, questions about an international coalition and a Gulf War in the not-so distant memory.

Read Clinton’s address here.
Read Trump’s address here.
But history, rather than repeating itself, has become inverted with the blunt and deadly application of American military might.
It’s like bizarro world, because the elements are largely the same, just reversed.
Clinton said he was building up an international coalition. Trump has taken pride in breaking coalitions down. Clinton used the military to attacking Iraq’s weapons program. Trump took out a general visiting Iraq in part as an act of retribution. Clinton’s enemy was Saddam Hussein in Iraq. Trump’s enemy is Iran.
The constant is that the problems created by despotic leaders in the Middle East — and US responses to them — carry on from President to President to President. 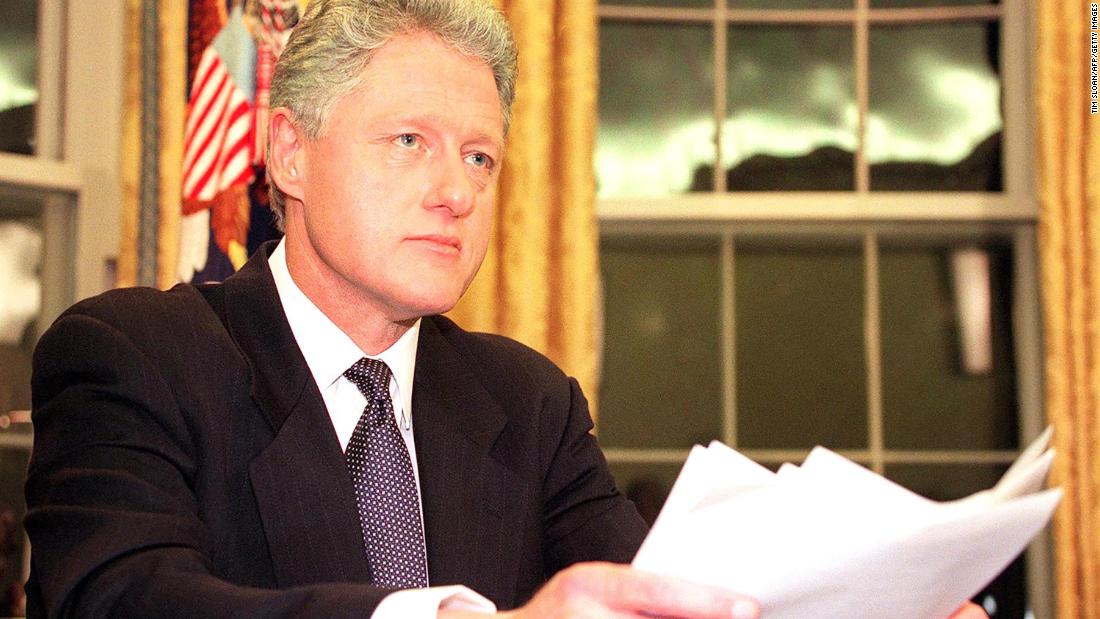 Republicans delayed Clinton’s impeachment in the House by a week when he launched days of airstrikes against Iraq beginning on December 16, 1998.
Twenty-one years later, Trump is already impeached and facing an uncertain Senate trial.
Clinton announced the strikes the day they occurred in an address to the nation from the Oval Office.
Trump instead waited, speaking first from his private club in Florida the day after strikes, in a phone interview with a conservative radio program and during an appearance with the Greek Prime Minister days later, and finally, more formally from the White House five days after the strike took place and the day after retaliatory strikes by Iran.
Clinton appeared alone, seated at the Resolute desk. Trump, during his White House address, emerged from the Blue Room, backlit and flanked by his three Cabinet secretaries and a grip of generals. After the speech, they all exited the way he had come — into the light. 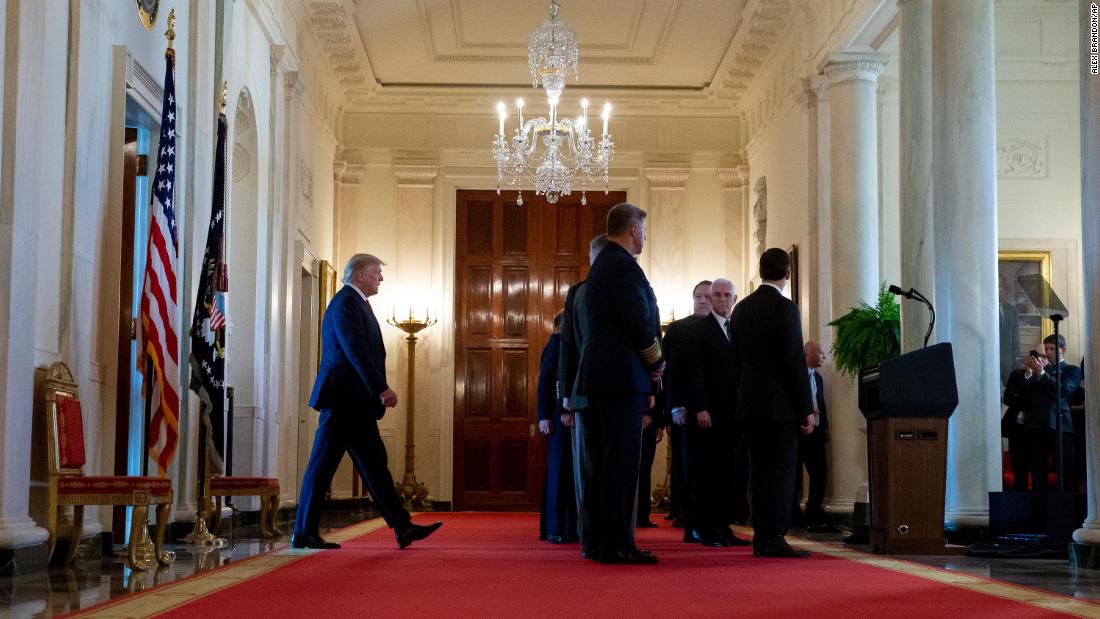 Trump’s strike targeted and killed an individual, top Iranian general Qasem Solemaini, who was traveling in Iraq. It was meant both to disrupt future plots against Americans in the Middle East, but also, according to Trump, as retribution for his past actions. Some Democrats have said it was an illegal assassination.
Clinton’s strikes, which were sustained over three days, targeted Iraq’s nuclear and chemical weapons capabilities. He specifically mentioned Hussein’s use of chemical weapons against his own civilians, Kurdish Iraqis persecuted in the northern part of the country.
Trump’s strike to take out Soleimani came despite recent steps to withdraw US troops from parts of Iraq and Syria, an effort which many view as a betrayal of the Kurds, who relied on US support and influence to protect them from Turkey.

Clinton argued that his strikes had to be conducted when they were because it was right after a report on Iraq’s lack of compliance with UN resolutions, but also so that they could be concluded before the beginning of the Muslim holy month of Ramadan.
Trump said soon after killing Solemaini that he had drawn up a list of targets, including cultural sites, that he would hit if Iran retaliated. He retreated from the threat after his Secretary of Defense said the military would follow the laws on conflict, which prohibit the targeting of civilians or cultural sites.

Both Trump and Clinton promised economic sanctions and the issue took up large portions of their speeches. Clinton said sanctions were needed to keep Iraq from using oil money to pursue its weapons programs and endanger the world community.
Trump, similarly, argued that Iran used money from the sale of oil after 2015 nuclear deal to finance a terror campaign. He said other countries should formally abandon the deal like he did in order to pursue a new deal that would let Iran prosper.
Clinton seemed to be justifying sanctions and explaining why they were necessary, even though they would cause hardship to the Iraqi population.

Clinton did not mention Middle East oil in his remarks. Trump claimed the US, which is now the top world producer of energy and oil, is free of foreign oil. “We are independent, and we do not need Middle East oil,” he said, although that ignores the importance of foreign oil in the world oil market.

On changing Iraq and Iran

Clinton said the US would work with the opposition leader in Iraq to change the regime there. And he noted it would take time. He was so very right. His successor, George W. Bush, launched a war in Iraq and US troops remain there to this day.
As retaliation for the killing of Soleimani, the Iranian government launched ballistic missile attacks on bases housing US troops, although none were killed. Trump told the people of Iran the US wants them “to have a future and a great future — one that you deserve, one of prosperity at home, and harmony with the nations of the world.”

Notably, Clinton talked about the need to end the Hussein regime in Iraq. It took a war instigated by his successor to accomplish that. But the power vacuum created by Hussein’s ouster arguably emboldened Iran and helped create the situation Trump is dealing with.

Clinton, who launched the strikes as he was being impeached, mentioned impeachment during his address.
“Saddam Hussein and the other enemies of peace may have thought that the serious debate currently before the House of Representatives would distract Americans or weaken our resolve to face him down. But once more, the United States has proven that although we are never eager to use force, when we must act in America’s vital interests, we will do so,” he said.
Trump did not mention his impeachment or impending Senate trial during his address from the White House. He did tout his own presidency, arguing he has given new funding to the military and bragging about US energy independence.
But Trump was asked about impeachment by Rush Limbaugh days after his strike.”It’s so sad for our country,” he told Limbaugh. “We’re fighting with Iran, we’re fighting will all of these different places- and in many cases doing great, making trade deals and doing so good- but I have to spend, and my team has to spend time on this stuff.”

Clinton ended his speech promising the world would be a safer and more peaceful place in the future because of US leadership.
“In the century we’re leaving, America has often made the difference between chaos and community, fear and hope,” Clinton said, promising leadership against “enemies of peace” in the future.
Two decades into that new century, the focus on community might be the biggest difference between Clinton and every other recent US president compared to Trump, who seems to thrive on chaos.