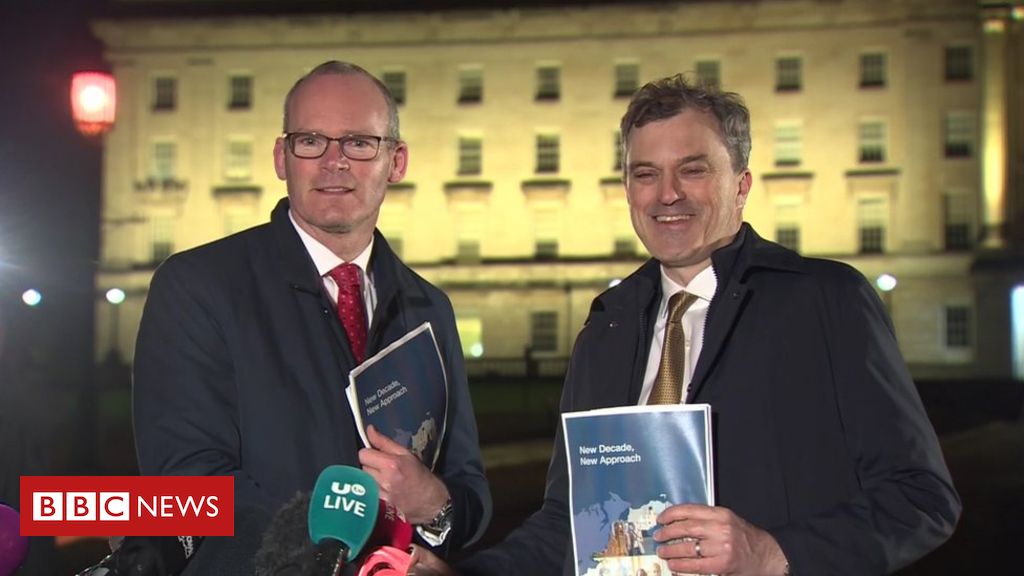 The British and Irish governments must deliver the “promised financial package”, Conor Murphy has said.

The new finance minister said the local parties had “done their part by restoring the power-sharing executive”.

“The two governments must now honour their pledge and provide the funding needed to deliver on the New Decade, New Approach document,” he said.

Sinn Féin and the DUP, along with the SDLP, UUP and Alliance, re-entered devolved government on Saturday.

Stormont’s power-sharing coalition, led by the DUP and Sinn Féin, collapsed in January 2017.

The DUP and Sinn Féin supported the deal to restore Stormont’s political institutions.

“To deliver these commitments, the governments pledged a substantial injection of funding, over and above the block grant,” he added.

BBC News NI Economics and Business Editor John Campbell said he understood there was now some nervousness among the parties and officials about exactly how much money will be on offer.

“The deal was done without anyone being clear about the numbers so there is still much to be pinned down,” he added.

“The subtext of Mr Murphy’s statement is: ‘The government’s have raised public expectations and if they don’t come up with the cash the honeymoon will end very quickly.'”

I look forward to discussions this week with the new executive based on prioritisation of its programme and value for money in the best interests of taxpayers.

The new executive is likely to meet for the first time on Tuesday.

On Sunday evening, the NI Secretary Julian Smith tweeted that he was looking forward to meeting with the new executive.

The new health minister, Robin Swann, said he has already made contact with trade unions over the ongoing dispute regarding pay parity and staffing levels.

Mr Swann said he hoped to meet them “as soon as possible”.

Saturday marked the first meeting of the Northern Ireland Assembly in three years.

A speaker was chosen and the other ministerial positions filled.

The positions are known as a “diarchy” which means they are equal and govern together.

Addressing the assembly, Mrs Foster said the politicians have “many differences”.

“Michelle’s narrative of the past 40 years could not be more different to mine,” she said.

“I’m not sure we will ever agree on much about the past, but we can agree there was too much suffering, and that we cannot allow society to drift backwards and allow division to grow.”

She added that it was “time for Stormont to move forward”.

Michelle O’Neill said it was her “sincere wish that 2020 brings real change”.

“I see no contradiction in declaring and delivering on our firm commitment to power sharing with unionism in the Stormont Assembly while also initiating a mature and inclusive debate about new political arrangements which examine Ireland’s future beyond Brexit,” she said.

“Similarly, there is no contradiction in unionism working the existing constitutional arrangements while taking its rightful place in the conversation about what a new Ireland would look like.”

The prime minister called it a “momentous day”.

“The parties of Northern Ireland have shown great leadership in coming together to accept this fair and balanced deal in the interests of everyone in Northern Ireland,” Boris Johnson said.

All five main parties in Northern Ireland – the DUP, Sinn Féin, Alliance, SDLP and UUP – have joined the new executive.

Their first item of business at Stormont on Saturday was the election of Sinn Féin’s Alex Maskey as the assembly’s new speaker.

She said it followed conversations with Arlene Foster and Michelle O’Neill on Friday night.

Mrs Long said she was “honoured to have the support of all sides of the house”.

With the exception of the role of justice minister, the posts are shared out using a system called D’Hondt, in which ministerial posts are allocated according to parties’ representation in the assembly.

The other members of the executive are:

What caused Stormont to collapse?

Relations between the DUP and Sinn Féin had deteriorated in recent years as the two parties were diametrically opposed not only on Northern Ireland’s position within the UK, but also issues such as the Irish language; same-sex marriage; abortion and how to deal with the legacy of the Troubles.

But unexpectedly it was a row over a green energy scheme which pushed their relationship past breaking point.

The Renewable Heat Incentive (RHI) scheme was set up by DUP leader Arlene Foster when she was enterprise minister, but it ran over budget and at one point threatened to cost taxpayers £490m.

Sinn Féin demanded that Mrs Foster step aside as first minister during an inquiry into the RHI scheme and when she refused, they pulled out of government on 9 January 2017.