Tears and relief as the UK’s MEPs bid goodbye 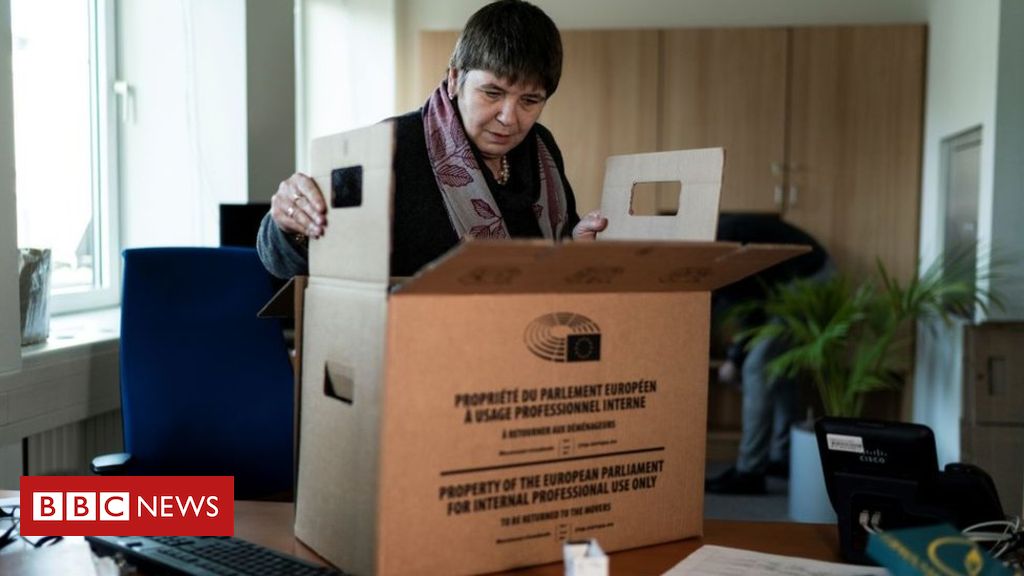 As the clock strikes 23:00 GMT on Friday, 31 January, the 73 MEPs who represent Great Britain and Northern Ireland in the European Parliament will bid farewell to their roles.

For some of them, there is only delight and relief as the UK approaches Brexit. For others, there have been tears and goodbye hugs.

“How I am feeling is how somebody feels when you have a redundancy and a bereavement at the same time,” says Green MEP Molly Scott Cato, who has represented south-west England since 2014.

It’s been a tearful goodbye and a “grim, grim week”, she says, during a break from packing up her Strasbourg office.

But, in contrast, Brexit could not have come soon enough for Jake Pugh.

“We are delighted,” says the Brexit Party MEP for Yorkshire and the Humber. “We were hired to be fired.”

He is one of 29 Brexit Party MEPs who were elected in last May’s European elections – a vote many considered as confirmation of the UK’s desire to leave the EU.

Nine months on there remains a clear divide over Brexit among the MEPs, but the politicians appear united about a feeling of pride at what they have achieved.

“There has been so much warmth and comradeship,” says Labour’s Seb Dance of his final week in Strasbourg. “Most people are pretty sad about the whole thing.”

The Labour MEP for London had previously campaigned for another vote on the UK’s membership of the EU.

Speaking to the BBC as he dashes between trains in Paris, he says he is proud of the things that “never got the headlines” during his six years in the role.

He highlights his involvement in the European Parliament’s special inquiry committee into the Volkswagen emissions scandal.

Ms Scott Cato says she is proud of her work on the issue of sustainable finance and new EU restrictions on the use of antibiotics in farms.

The European Parliament is a “real parliament”, she says, expressing her frustration with the UK’s first-past-the-post system – which means that parties like hers struggle to get people elected in Westminster.

“We don’t get the parliamentary representation we should have.”

Green Party colleague Magid Magid says there is a sense of sadness, but he feels “truly grateful and humble for this amazing opportunity”.

Mr Pugh says he “fully recognises there are MEPs with different political outlooks who are sad to be leaving” but, he says, the EU “has some real issues”.

“However cynical I was about the EU before I got here, it is way worse than I thought,” he says.

The Eurozone is a “disaster”, he says, and MEPs in Brussels and Strasbourg “are very remote from their electorate”.

Brexit is “really good news for the younger generation”, he says, adding that he has pursued Brexit for them, so young people can enjoy the same freedom he had growing up.

It’s clear that view is shared among his colleagues, a number of whom shared their delight on Twitter at leaving the parliament building in Strasbourg for the final time.

Belinda de Lucy says leaving no more taxpayers’ money will be wasted “on this ridiculous vanity project”, while Ben Habib says he will not give the parliament “a second thought” after leaving.

“I won’t miss being in this institution… but of course I have been privileged and enjoyed being here for this historic moment.”

And John Longworth, the former Brexit Party MEP turned Conservative, says that his time in the European Parliament has “reinforced” his view that the “whole set-up is bizarre, bureaucratic and wasteful”.

They say that they are proud at having achieved what they set out to do – Brexit.

But even arch-Brexiteer Nigel Farage – who has been an MEP for south-east England since 1999 – called his time in European Parliament “an amazing journey”.

He told his LBC radio show he will miss the “drama” and being “shouted at by (European Parliament Brexit co-ordinator) Guy Verhofstadt” and “mocked by hundreds many times over”.

The UK’s newly vacated parliament seats will be spread out among the EU’s 27 remaining countries – Spain and France will gain five more seats in a process that takes into account the population of a country.

From Friday, the UK MEPs will no longer have to regularly do the four and a half hour journey from London to Strasbourg, via Paris, or the two-hour trip to Brussels.

But many of the pro-EU MEPs are hoping that they can keep the close ties formed with the bloc.

Grazie bene to our wonderful friends @eurodeputatipd – our brilliant Italian colleagues have been very supportive and their leader @brandobenifei such a good friend to @LabMEPs – we will miss you but we’ll be back presto, amici! 🇮🇹 🇮🇹 🇮🇹 🇪🇺🇪🇺🇪🇺 pic.twitter.com/p7Rf9KwfFI

“We have built up relationships with colleagues, lots of them were in tears – not just Brits,” Labour’s Richard Corbett says.

It has been a sad and emotional time, he adds. But this is also tinged with “a lot of anger and frustration”.

Wednesday will be the final time that the UK’s MEPs sit in Brussels – when the Parliament is expected to rubber-stamp Boris Johnson’s withdrawal deal taking the UK out of the EU.

As a party is held in London’s Parliament Square to celebrate Brexit on Friday, a vigil is expected to be held in Brussels.

Some MEPs will then move on to other jobs – the Brexit Party’s Jake Pugh says he will return to his business. Others are not sure yet what they will do, but are keen to maintain European relationships.