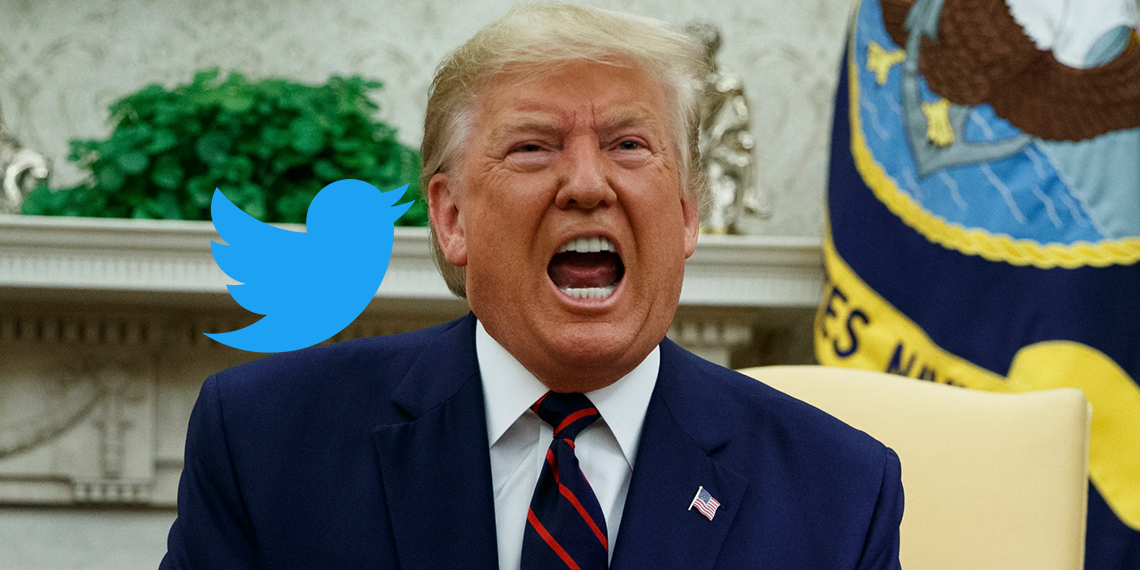 If you’ve been living under a rock—or don’t subscribe to The SUP yet for some reason—you may not know that for the past what-seems-like-forever, the President has been under some sort of investigation — from misconduct prior to running for president, to misconduct during his campaign to finally, abusing his power while in office.

However, like any other sub-par white guy, our man Donald has way too much unearned confidence, and, in a totally unsurprising move, is running for reelection come November.

Since crazy sh*t comes out of the White House at least twice a day, I thought it was important to remind you of some of the most ridiculous things you may have forgotten about.

We all know that POTUS has an affinity for a certain social media platform on which he pretty consistently incriminates himself. I scoured the internet and a platform full of Donnie T.’s tweets to pull this list together, and now I would like to set myself on fire and cry for a while. You’re welcome!

If you’re a masochist and want to go through the platform I used for, like, fun or whatever, you can find it here at http://www.trumptwitterarchive.com/.

1. On Winning the Election

The electoral college is a disaster for a democracy.

To put this in context, Hillary Clinton beat Trump in 2016 by close to 2.9 million popular votes, which pretty much means that the electoral college is the main reason he is even in the White House. It’s good to know that he agrees he should never have been elected President.

2. On Being Laughed At

We need a President who isn't a laughing stock to the entire World. We need a truly great leader, a genius at strategy and winning. Respect!

Last year, I made fun of my friend for hooking up with someone she said she’d never talk to again and then I got mad at her for making fun of me for doing the exact same thing. Since I’m turning 21 in a week, it’s harmless and kind of funny. Imagine how insane would it be if the president acted like a 20-year-old girl? Good thing you don’t have to!

Last December, five-ish years after this was tweeted via a f*cking Android, the leaders of France, Canada, and Great Britain all shared a laugh at the President’s expense. So, yeah, Donnie, it would be nice if our president were taken seriously.

3. On Being Productive and Golf

Too busy playing golf? @BarackObama sends form letters with an electronic signature to the parents of fallen SEALs http://t.co/ELKcqTyr

We pay for Obama's travel so he can fundraise millions so Democrats can run on lies. Then we pay for his golf.

Could you guys even imagine our Commander-in-Chief traveling around the country to host fundraising rallies or to play golf while there are serious matters to attend to? Seriously—I could not imagine a world in which a President went to a campaign rally while the House was voting on whether to impeach him. It would be even more insane if the President were playing golf during, say, a f*cking devastating hurricane.

Be prepared, there is a small chance that our horrendous leadership could unknowingly lead us into World War III.

In order to get elected, @BarackObama will start a war with Iran.

Yeah. It would be f*cking crazy if someone made a decision that put our country at danger of being forced to enter a massive war. From instigating a Twitter fight with North Korea to ordering a drone strike that killed Iranian Major General Qasem Soleimani, this President is not doing well to avoid, you know, a third World War. Even better, in 2011, Trump said that Obama would start a war with Iran to win reelection. His visions are playing out with Raven Simone accuracy. Way to go, man.

Why does @BarackObama always have to rely on teleprompters?

This scathing criticism of Obama’s teleprompter use is coming directly from the guy who allegedly snorts Adderall to be able to read off a teleprompter. Last summer, Trump blamed a teleprompter problem when he got sh*t for saying that the “Continental Army took over the airports during the Revolutionary War.” Wild that his reliance on teleprompters is so extreme that it prevents him from knowing literally anything about history.

6. On Giving Credit Where Credit Is Due

Like many of us, Trump requires external validation and is constantly seeking approval. Unlike many of us, he is not showing signs of growing out of that need and is also the F*CKING PRESIDENT OF THE UNITED STATES. So, anyway, Trump criticized Obama for taking credit for the killing of Bin Laden.

Crazy because, in a briefing given after the killing of Soleimani, he, um, took credit. He literally said, “last night, at my direction, the United States military successfully executed a flawless precision strike that killed the number-one terrorist anywhere in the world, Qasem Soleimani.”

7. On College Records and Applications

For the sake of transparency, @BarackObama should release all his college applications and transcripts–both from Occidental and Columbia.

Back in the good ol’ days of Obama (we miss you), Donnie was really passionate about the release of a ton of Obama’s records including his birth certificate and college applications. But these days, our President, who is obviously really smart, had his lawyer threaten U Penn to get his transcripts covered up. Donnie says he is a very stable genius so who cares if he hid his transcripts, and that we still haven’t seen his tax returns. I think we should take him at his word and believe him when he says he’s really smart and rich the same way we do for guys who claim they are six feet on dating apps.

8. On His Own Impeachment

An interesting cartoon that is circulating. pic.twitter.com/OPG2R2ytkr

I want to let this cartoon that Trump tweeted in 2014 speak for itself because I’m f*cking speechless but let me follow it up with something he tweeted 5 months prior.

Are you allowed to impeach a president for gross incompetence?

9. On Pelosi, Clinton, and Impeachment

Check out this exchange I had with then private citizen @realDonaldTrump on Oct. 15, 2008. We spoke about House Speaker Nancy Pelosi and he then offered his thoughts about impeachment. pic.twitter.com/mXlsG9SjbB

As a treat, the last one I’ll leave you with is a surprisingly coherent video in which Donald f*cking Trump himself says the last things we would expect to hear from him in 2020.

Trump says (referring to Pelosi), “I’m very impressed by her, I think she is a very impressive person, I like her a lot”. Then, he follows it up with “it seemed like [Pelosi] was gonna really look to impeach Bush and get him out of office which would have been a wonderful thing.”

Why did he think she should impeach Bush? “For the war… well he lied! He got us into the war with lies, and I mean look at the trouble Bill Clinton got into for something that was totally unimportant.”

Every action the President takes seems like the one that will finally end it, and when that’s never the case, it can be easy to get discouraged. That’s why stuff like this is important. We can’t just get distracted by his crazy fixation on his inability to flush a toilet and forget about all the truly evil and insane things this man has done.

The clusterf*ck that is this administration is going to stay in the White House unless you—and all of your friends and loved ones—actually pay attention and get informed. It’s not like you have to start only watching CNN or quit your job to go volunteer for whoever the nominee will be, but you have to do something (vote and subscribe to the newsletter, for starters).