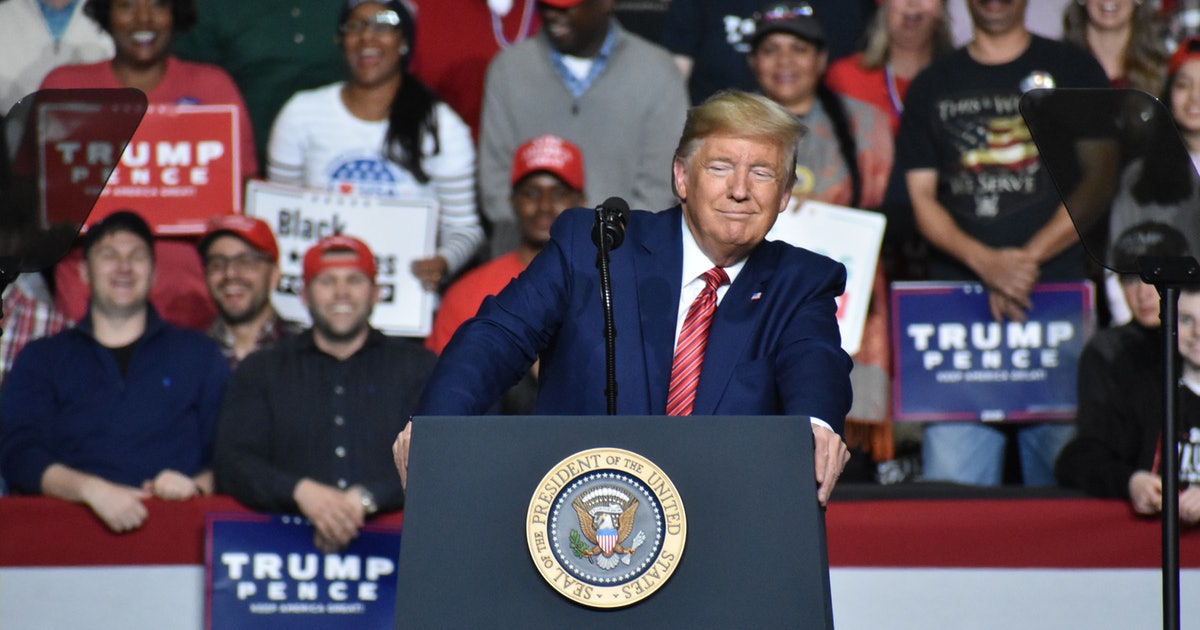 These Tweets About Trump’s Coronavirus “Hoax” Comment Tear Him Apart

While most of the world is concerned about the spread of coronavirus, President Donald Trump doesn’t seem overly worried. At least, not according to comments he made in South Carolina on Friday, Feb. 28, when he implied criticisms of his administration’s response to the coronavirus were a “hoax” meant to damage him politically. Unsurprisingly, many people were not thrilled with his assessment of the situation. These tweets about Trump’s coronavirus “hoax” comment are full of disbelief he would downplay this public health concern.

On Friday, the same day that three new coronavirus cases unconnected to travel were reported on the West Coast, Trump took to the stage at a rally in North Charleston, South Carolina. At the event, he boasted about surviving multiple scandals, including Special Counsel Robert Mueller’s investigation into possible ties between the Trump campaign and Russia, which concluded in early 2019, and Trump’s impeachment trial, in which the president was acquitted on Feb. 6. Now, he said, coronavirus fears were being used against him.

“Now the Democrats are politicizing the coronavirus,” he told the crowd on Feb. 28. “They tried to beat [me] on Russia, Russia, Russia, that didn’t work out too well. They tried the impeachment hoax. That was on a perfect conversation. They tried anything, they tried it over and over, they’ve been doing it since [I] got in … and this is their new hoax.” Elite Daily reached out to the White House for any additional comment regarding the president’s remarks and intent, but did not immediately hear back.

The coronavirus has been making its way around the globe after an initial outbreak in Wuhan, China. While most cases of the disease are reportedly mild, as of Feb. 29 more than 83,000 cases, including some 2,800 deaths, had been reported worldwide in over 50 countries, per CBS News. Health officials are concerned about the international spread of the virus, and though the World Health Organization (WHO) and the U.S. Centers for Disease Control and Prevention (CDC) have not declared a pandemic, some health experts think it’s only a matter of time. A global health crisis could have economic effects, as well — in the United States, some companies are already planning for business slowdowns and disruptions, and on Feb. 28 stock markets dropped dramatically, an ominous sign for the future.

Meanwhile, the Trump administration has been criticized for an allegedly inadequate and disorganized response to the virus, including accusations the administration has downplayed the public health threat, hindered the availability of testing for people who may have contracted the virus, and left the response to unqualified or underprepared officials. A whistleblower complaint reported by on Feb. 27 also alleged that federal health employees sent to work with people under quarantine did not get proper medical training or protective gear to shield them from possible contamination. Elite Daily reached out to the White House for comment regarding the criticisms and the reported whistleblower complaint, but did not immediately hear back. Vice President Mike Pence took over the coronavirus task force on Feb. 26.

Given the criticisms of the response, many people were not happy that the president seemed to be so dismissive of the situation.

The president has a history of referring to news stories he doesn’t like or that are critical of him as “hoaxes.” Besides his South Carolina speech, he repeatedly referred to the impeachment proceedings against him as a “hoax,” and did the same with Mueller’s investigation. He has also previously called man-made climate change a hoax, although he later walked that back. The morning after his coronavirus comments, Trump tweeted that he would hold a Feb. 29 press conference on coronavirus developments.