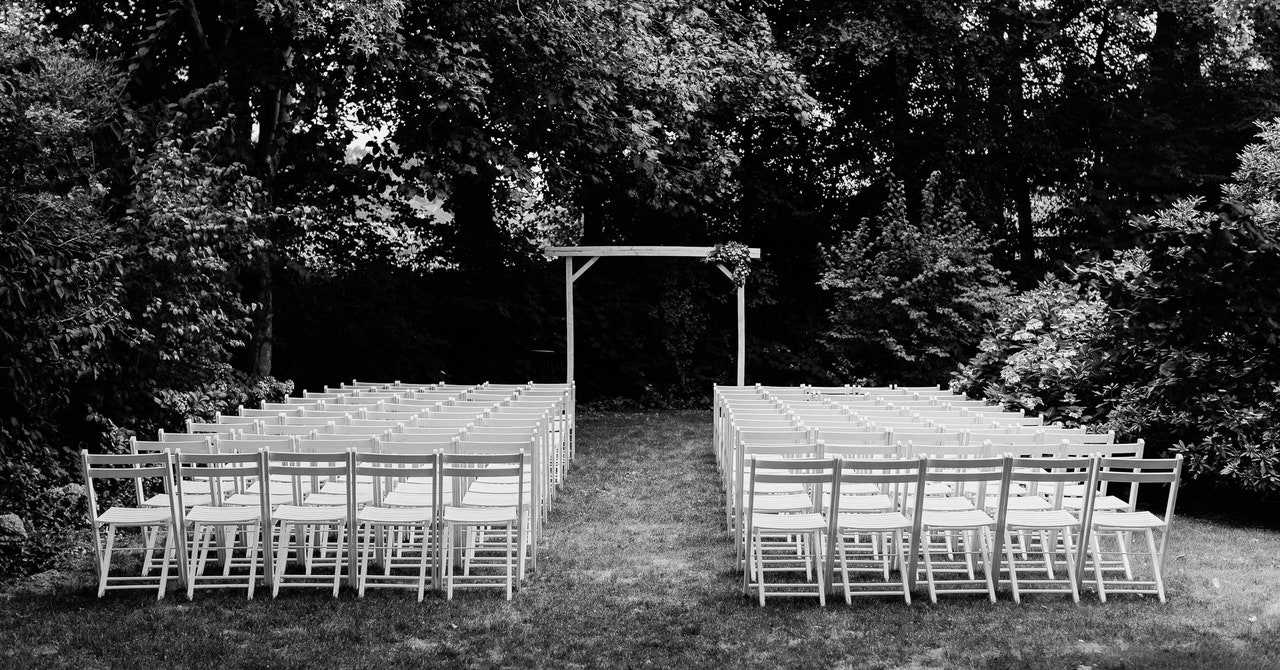 The moderators of r/weddingplanning are no strangers to controversy. Divisive dresses, family dramas, and anxious brides and grooms are par for the course for the volunteer supervisors of Reddit’s go-to forum for the recently betrothed. Then came the coronavirus.

Suddenly, the usual mix of wedding dress pictures and etiquette questions became dominated by a new kind of concern. “I would say nonstop we’re moderating recently trying to contain posts and keep subscribers as calm as possible,” says Ashley, writing in a joint response from multiple people behind the shared "wedditmoderator" account (she and the other moderators who replied asked not to be identified by their real names or individual Reddit usernames owing to previous experiences of harassment). “I realized it was going to be a big deal when we started getting numerous reports on all kinds of comments and posts. It was insane.”

The wedding industry has been hit hard by the coronavirus pandemic, with couples being forced to reconsider, postpone or completely scrap their plans due to health advice and government lockdowns. For many of r/weddingplanning’s 125,000 subscribers, known as "Wedditors," the subreddit became the first port of call to ask for advice, seek condolences or simply vent. The popular flair tags “Dress/Attire” and “Relationships/Family” became more frequently interspersed with “Tough Times”. Posts are fraught with emotion: should I cancel my wedding? Will I get any money back? What if that means my terminally ill father won’t be able to attend? For the moderators, the usually sunny community became a hotbed of anxiety way above the usual pre-wedding jitters.

The coronavirus posts largely tracked the spread of the virus. It started around the beginning of February with a few posts about concerns over delays to wedding dresses being made in China, where the outbreak first started. Then, a few posts trickled in from international brides and grooms (the subreddit skews heavily American), and people planning destination weddings or honeymoons in Italy. At the end of February, people started asking questions about insurance coverage for cancellations, and by the start of March there was an influx of posts from users seeking advice for their imminent plans. “That was when we started discussing how to moderate all these similar posts without the whole subreddit turning into an all virus, all the time echo chamber,” says moderator Addy.

Reddit communities are largely left to their own devices to decide their own rules and how to enforce them. Some, such as the popular r/amitheasshole subreddit, have placed a total moratorium on coronavirus posts in order to prevent the sharing of disinformation or keep their communities a place where people can get away from the relentless headlines. Others, such as r/teachers, are trying to proactively provide resources for people who now find themselves in a very different situation. And of course, plenty of coronavirus-specific forums have been created—r/coronavirus has 1.7 million subscribers.

Initially, the r/weddingplanning moderators didn’t remove any posts unless they broke other rules (users are asked to be respectful, Tuesdays are reserved for text-only posts, and memes are not allowed—these belong in r/trollxweddings instead) and set their automoderator to comment on coronavirus threads with links to resources such as the World Health Organization. They were reluctant to sequester all coronavirus posts into a single megathread, for fear of making people more anxious. “We felt that putting everyone in one place to talk about this could exacerbate anxieties like a panic chamber,” says Emilia, who became a moderator shortly after planning her own wedding. But the posts kept increasing and, after discussing on their Discord server, they decided that putting all the virus-related discussion in one place would allow Wedditors to support each other more easily without completely swamping the subreddit for users who wanted to see the usual wedding-related fare.

The difficulty in deciding how to manage the coronavirus posts was exacerbated by a lack of clear advice and the conflicting needs of different users—some of whom have weddings planned imminently, and others who are just starting to plan. The moderators were keen to operate best practices from a public health perspective, but weren’t always sure how—especially when there was limited official health advice available. “Several of us have science backgrounds so we can moderate some content but none of us are pandemic experts,” Emilia says. “This is a wedding planning subreddit!”

They first automatically redirected all coronavirus-related posts to the pinned ‘Daily Discussion’ thread, but the automoderator didn’t catch every post and some people got upset when their posts were removed or redirected. “It sounds easy—all coronavirus threads in one place—but there were a lot of nuances we didn’t anticipate because we got so many different variations on the topic,” Emilia says.

By March 15, the moderators were struggling to keep up with demand and the public health situation in the US and Europe had changed significantly. The mods introduced a daily COVID-19 Megathread, which is now the first thing people see when they visit the subreddit. Comments are divided into months of the year, so members can easily find other wedding planners working to a similar timeline.

Although the moderators say that many subscribers have been kind and thoughtful to one another, the response from the community hasn’t always been positive. After all, most of the subreddit’s active users are currently planning weddings, and are having to face difficult decisions over what is supposed to be a joyful occasion. “Weddit as a community is going through a lot of emotions, and these emotions have changed over time as the situation has changed,” says Maeve. “Disbelief, sadness, and anger are three emotions we see a lot. Lots of anger.” Sometimes this gets directed at the moderators. “People upset or unclear about why their post was moved, upset about no megathread, upset about having a megathread, upset that we’re not explicitly saying you should postpone or cancel your wedding, upset that we’re allowing people to imply you should cancel your wedding, the whole gamut,” Emilia says.

A particularly controversial topic, especially when official advice on social distancing and gatherings was unclear, was whether couples should go ahead with their weddings or cancel. In one instance, a user whose comment had been deleted wrote to the mods that, “Blood is going to be on your hands if you continue to censor any dissent toward brides proudly refusing to cancel and in doing so, risking countless lives.” But in that case, the mods explain, they had removed the post because its language did not meet the subreddit’s number one rule of “constructive criticism and respect”—the user had told the person who posted to “get the fuck over themselves” and “fuck those bridezillas who think their wedding is worth people literally dying.”

Even apparently anodyne posts can cause schisms. In the past couple of weeks, many Wedditors have been sharing pictures of the dresses they didn’t get to wear in an attempt to lighten the mood and maintain a celebratory atmosphere. But dress pictures on r/weddingplanning have always been surprisingly divisive, with some users complaining that the subreddit is overwhelmed with dress posts and that the new wave of dress posts is just copycat spammers trying to reap karma.

It’s been a tough time for the moderators, who didn’t exactly expect to be sifting through posts about a pandemic when they took on the r/weddingplanning mantle. They all say that they are pleased to have the support of each other. Addy, who is also a moderator on some sport subreddits, says the vibe there is notably different: “There, it’s been quieter and more about finding anything to fill the unexpected gap in content, which is a huge contrast from dealing with the (very understandable) stress and crises on r/weddingplanning.” She says that r/weddingplanning is usually her “moderator oasis” compared to dealing with the rivalry, sexism and racism on the sport forums. “It’s so sad to now see r/weddingplanning as the more emotionally taxing place to moderate (although still extremely light on the bigotry, thankfully),” she says.

“It’s hard because not only do we have a duty to moderate a community in turmoil, but we also have to lead our real lives,” says Maeve. “In a time of such uncertainty, panic and fear, it’s hard for me to prioritize this additional volunteer role of /r/weddingplanning moderator, because that has to come last. I have to worry first about how I’m going to keep my family safe and healthy. What will happen to our jobs? Will we have enough food to eat and enough money to survive this? Moderating /r/weddingplanning is important, and something I have given years of my life to. It’s just hard in the midst of a pandemic to log into Reddit and see a million reported posts, angry modmails, and posts by users in crisis mode … We love our community and we want to help, but what does help even look like? What can we do? It seems hopeless.”