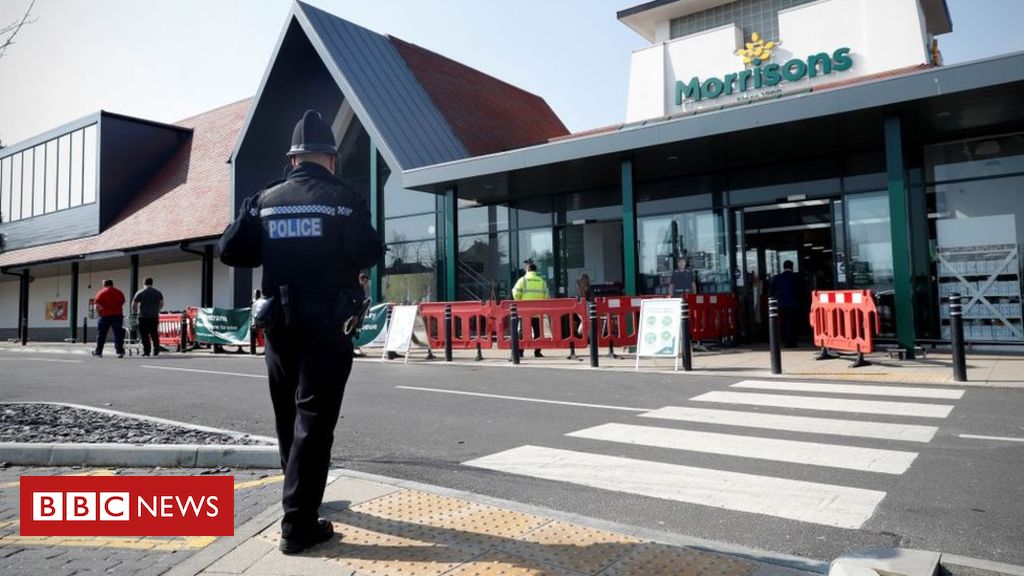 Downing Street says people can buy whatever they want from shops that remain open amid concerns some police are overstepping lockdown powers.

There have been cases of police warning shoppers against buying “non-essential” items.

No 10 also said people can use their gardens as they wish, after a video showed police confronting a family for letting their children play outside.

Meanwhile, the PM has been up and walking as his recovery continues.

Downing Street said Boris Johnson, who was discharged from intensive care to a hospital ward on Thursday night, “has been able to do short walks, between periods of rest, as part of the care he is receiving to aid his recovery”.

The spokesman said Mr Johnson had spoken to his doctors and thanked “the whole clinical team for the incredible care he has received”.

A further 866 people have died in hospitals in England after testing positive for coronavirus, NHS England announced.

In Scotland, 48 more people have died, in Wales there were 29 more deaths, and in Northern Ireland there were 10.

Asked about suggestions that police were patrolling the supermarket aisles to see what people were buying, Downing Street said people were allowed to buy whatever they wanted from shops permitted to be open.

“We set out a list of shops which could remain open and if the shops are on that list then they are free to sell whatever they have in stock,” the prime minister’s official spokesman said.

Police in Cambridge had to clarify a social media post – since deleted – by an “over-exuberant” officer who suggested they were monitoring aisles of “non-essential” goods in supermarkets.

“The force position, in line with national guidance, is that we are not monitoring what people are buying from supermarkets,” they said.

On Thursday, Home Secretary Priti Patel said it was “not appropriate” for police to be checking people’s supermarket trolleys after Northamptonshire Police threatened to introduce the measures.

Chief Constable Nick Adderley said the force would consider roadblocks and searches of people’s shopping if the public did not follow the rules. He later called his remarks “clumsy”.

With South Yorkshire Police also having apologised for a “well-intentioned but ill-informed” officer who told a family not to play in their own front garden, Downing Street said people could use their gardens as they choose – as long as they are with members of their household.

The government is seeking to reassure the public about the lockdown rules as it stresses the measures are working to reduce the spread of infection and the number of people admitted to hospital.

Newly-elected Labour leader Sir Keir Starmer urged the government to be transparent over its lockdown strategy and to clarify how long Mr Johnson will be “out of action”.

“We need robust replacement arrangements in place and we need to know what they are, as soon as possible,” he said.

Earlier, the prime minister’s father, Stanley Johnson, said there would have to be a “period of adjustment” before his son returned to work.

Housing Secretary Robert Jenrick has been accused of breaching the rules on travel, but Downing Street said it was “confident” he complied.

The MP for Newark in Nottinghamshire travelled from London to a second home in Herefordshire, and separately visited his parents in Shropshire, the Daily Mail and the Guardian reported.

The government has advised against travel to second homes – and urged people to distance themselves from elderly relatives.

Mr Jenrick has said he was delivering essentials to his parents, including medicines, which is allowed under the rules, and his family consider Herefordshire to be his primary home.

No 10 said ministers sometimes had “no option” but to travel to work from Whitehall and Mr Jenrick “has been doing important work in London on safeguarding the vulnerable”.

How have you been affected by the issues relating to coronavirus? Share your experiences by emailing haveyoursay@bbc.co.uk.