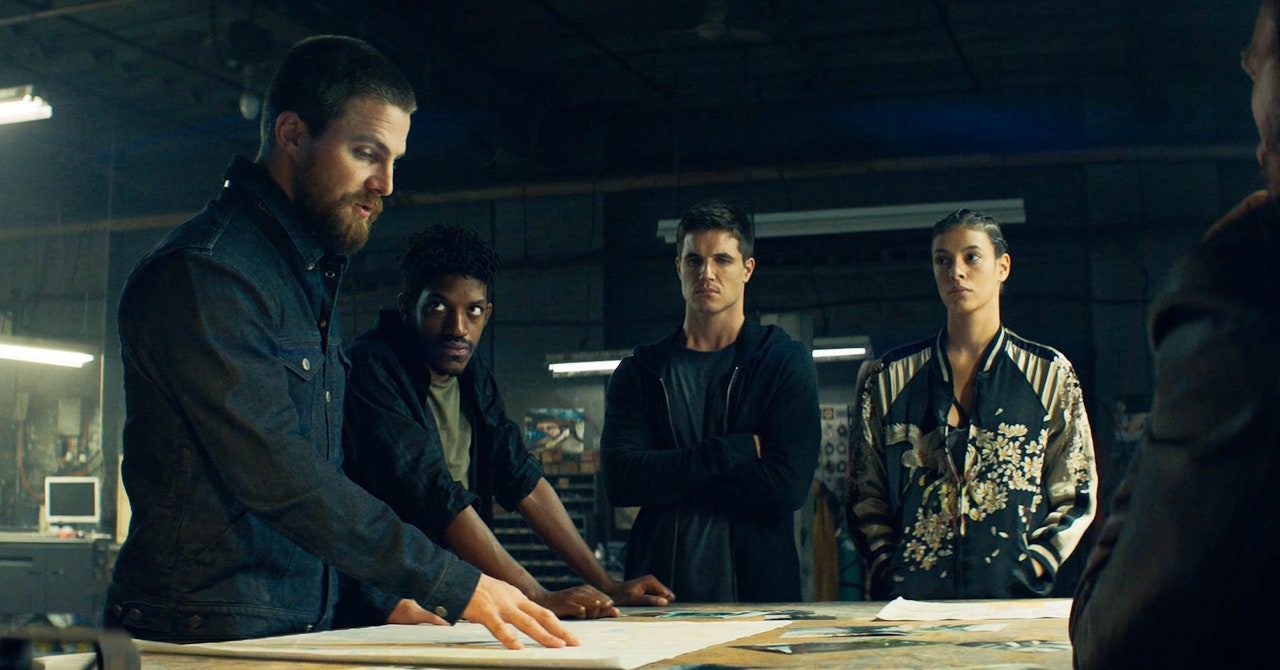 On the surface, Code 8 is essentially a grab bag of sci-fi and genre tropes. To paraphrase Bill Hader’s Stefon, this movie has everything: superpowered X-Men-esque mutants, dystopian surveillance drones, robo-cops that look like Chappie after a glow-up, an allegory for the human condition. It’s about a guy named Connor (Robbie Amell) in a fictional metropolis called Lincoln City, where 4 percent of the population is born with supernatural abilities (in Connor's case, he can manipulate electricity). In this alternate universe, people with powers have to register their abilities with the government, but they often work off the books, doing construction and other odd jobs. Connor’s mother is struggling with terminal illness, so he begins doing crimes to pay for her care. Again, tropes. It's working: Despite the fact that Code 8 never had a big national release—it currently ranks among the Top 10 most popular things on Netflix in the US.

Related Stories
TV
Tiger King Is Cruel and Appalling—Why Are We All Watching It?
TV
Reality TV Has Never Felt More Untethered From Real Life
Fandom
Netflix Can Kill The OA, but It Can't Kill a Movement

How? How did an indie sci-fi movie, which landed on Netflix on April 11, join the ranks of Tiger King and Ozark? Yes, lots of people are at home, sheltering in place to stop the spread of the coronavirus, and that means they’re digging deep into the streaming service’s archive. But they could’ve picked anything—why this? The most obvious answer is the film’s star. Robbie Amell and his brother, Stephen Amell, both star in Code 8 and helped finance the film by raising $2.5 million on the crowdfunding site Indiegogo. Stephen Amell is Oliver Queen/Green Arrow on the CW show Arrow (Robbie has appeared on the show, too), and both have devoted fanbases. As the movie has progressed from a 2016 short film to its latest incarnation, those devotees have followed along and participated in hype campaigns on social media. They got excited when the film did a limited run in theaters when it went to video-on-demand. Now, that enthusiasm has carried over to Netflix.

That traction is significant, not just for Code 8 but for indie films in general. Netflix has been famously tight-lipped about its viewership numbers, but back in February the company announced it would be adding a new row to everyone’s queues that shows the 10 most popular shows and movies in each country. Code 8 is currently in the third position on the list, but just being in the Top 10 alone is no small feat when one considers everything there is to watch on Netflix. Having a film like Code 8 break into those ranks proves there is an audience for indie sci-fi offerings and shows that fact to the world—which only encourages more people to watch.

Drawing attention to smaller movies and shows has been one of the big promises of streaming from the beginning. Netflix has stocked its shelves with smaller offerings—particularly genre programming—and while that’s kept a lot of writers, directors, crews, and actors employed, it’s been hard for Hollywood and the public at large to know whether those efforts are successful broadly. Over the years, Netflix has released data on obviously popular series like Stranger Things, but everything else seemed locked away in a black box. When filmmaker Ava DuVernay tweeted that her Netflix miniseries had been watched by more than 23 million accounts, it proved how large the appetite was for stories like the tale of the Central Park Five. As DuVernay put it, “Imagine believing the world doesn’t care about real stories of black people. It always made me sad … Our stories matter and can move across the globe. A new truth for a new day.” In releasing those numbers, DuVernay demonstrated the popularity of her series not only to its fans but also to its potential fans—who may be enticed to watch it because of its popularity—and to Hollywood itself.

Code 8, unlike Stranger Things or When They See Us, isn’t a Netflix original. It didn’t have the wind of the Netflix marketing machine at its back. That means the bulk of its traction with viewers is happening organically. Independent films, music, books, and media of all varieties have always had fandoms that were likely larger than they appeared to the naked eye, and the internet has always helped them grow. Code 8 is a fun movie; not a great one, but the kind of genre flick that helps pad out the endless reboots and remakes, the kind that makes people say, "Hollywood should be making more of these." The movie's popularity, while it may be an effect of lots of people being stuck at home and looking for things to watch, is also the result of something else: Viewers wanting more new science fiction and genre movies. It might lean on tropes, but it proves that if you make it, fans will come—and now, everyone knows it.