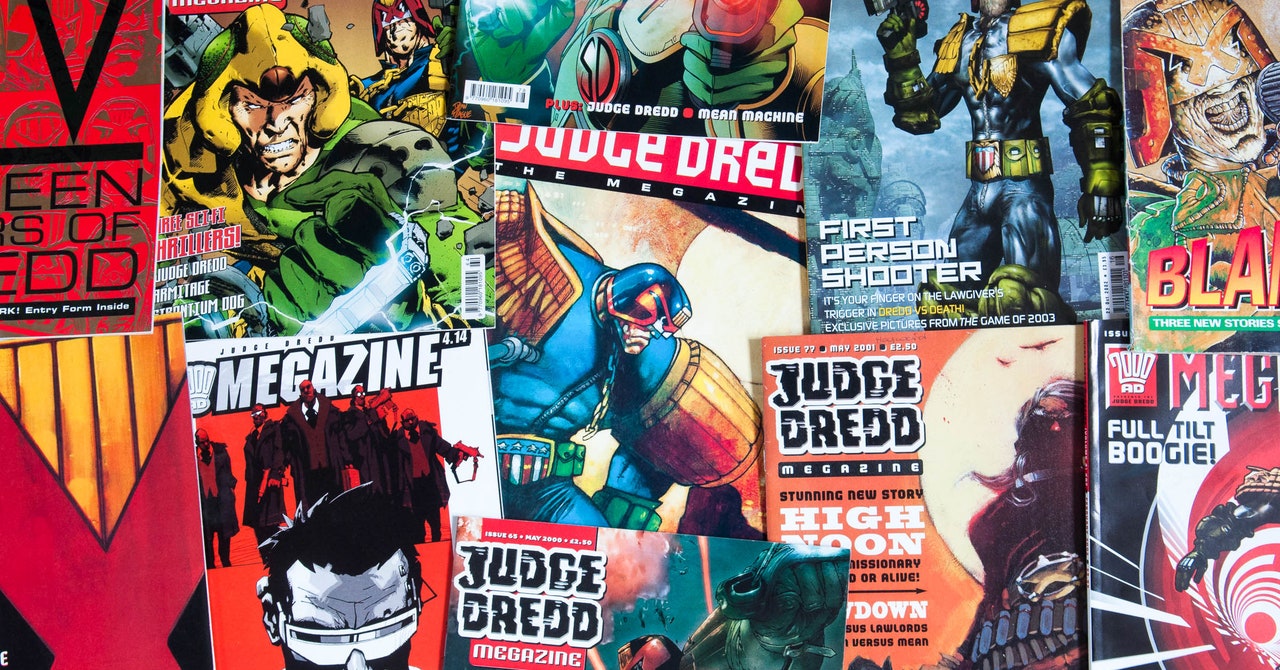 Last week, three US states—California, Washington, and Oregon—announced a new deal. Known as the Western States Pact, the agreement essentially combined the three entities into a West Coast super state for the purposes of dealing with Covid-19 and coordinating efforts to potentially restart their economies. For politicians looking to help their citizens cope, it seemed like a promising idea, so much so that states on the country's East Coast are planning a similar alliance. But for longtime readers of Judge Dredd, the serial from the pages of UK sci-fi anthology comic 2000 AD, it also seemed quite familiar. The Western States Pact is essentially Mega-City Two, the sister metropolis to Mega-City One, the massive urban area of the Dredd comics that stretches from Maine to Florida and as far west as Ohio.

Related Stories
Comics
5 Comics to Catch Up on While Self-Quarantined
Opinion
How Democracies Can Protect Both Public Health and Privacy
Geek's Guide to the Galaxy
Let’s Be Real: Judge Dredd Deserves Another Movie

This instance of reality mirroring science fiction isn't a rarity for Judge Dredd, which has demonstrated an uncanny ability to predict the future over the last four decades. Dredd, for example, introduced the concept of a dinosaur amusement park back in 1978, years before the 1993 movie Jurassic Park or the 1990 novel on which it was based. That's far from the point of Dredd—which was created, and still functions, as an action adventure strip with satirical subtext—but nonetheless, the current reality of life in the US has now reached a point where the country's best fictional allegory is a British comic strip about America's future a hundred-plus years from now.

The similarities don't stop there. The 2006-2007 storyline "Origins," which celebrated Dredd's 30th anniversary, outlined how America went from the United States to a nation of Mega-Cities. What happened? Well, the country ultimately fell into fascism at the hands of figures who make a series of empty promises. The storyline was likely inspired by Richard Nixon's presidency, as well as America's response to 9/11 and subsequent march to war in the Middle East. But it also has resonance in the era of President Trump, particularly in the figure of President Booth, the last US president in the world of Dredd, who is revealed to have won an election without fairly winning the popular vote.

But that's just politics. Outside of the halls of government, Dredd also has a prescient obsession with Covid-19-style viruses. Many of the comic's so-called "mega-epics"—stories that can run for nearly half a year in weekly serialization with ambitious scopes to back up their lengths—revolve around infectious diseases. "The Cursed Earth" sees the title character, a Mega-City One law enforcement officer, travel across the US to deliver a vaccine for the, uh, “2T(fru)T” (say it aloud) virus. "The Apocalypse War" is the direct sequel to a story in which Mega-City One has been infected with a virus that increases everyone’s xenophobia and anger, and "Sin City" sees a floating island outside Mega-City One locked down after it becomes host to a viral infection. It’s a strangely recurring theme.

The longest of all Dredd mega-epics, however, is also the ultimate Dredd story for right now. “Day of Chaos” ran 48 episodes through 2011 and 2012, and is, in part, a story about Mega-City One becoming overwhelmed by a virus that initially presents as the common cold, and is ignored by complacent citizens as a result. Authorities attempt to quarantine people to keep them safe, but those attempts ultimately prove ineffectual, leading to death on a truly staggering scale.

There’s a lot more to it—the virus in question, the so-called "Chaos Bug," is actually a form of biological terrorism, for one thing, and it’s part of a strategic attack against the city—but “Day of Chaos” is, at times, so in tune with the world today that it’s almost difficult to read. Conversations like, "Can we use that to fight it?" "Strict quarantine of all victims and potential victims—it might be possible" have a different impact today than when originally printed. And if scenes of crowds congregating and touching in old shows and movies make people uncomfortable now, watching mass graves being dug for plague victims feels even stranger, even worse, because of what's already happening and what could happen in the weeks to come.

Curiously, as disorienting and purposefully horrific as it is, "Day of Chaos" also captures parts of the experience of today that might not have seemed immediately obvious in advance: as the virus spreads, the story points out inefficiencies in testing—"Grand Hall can only spare two test teams. Probably pointless, anyway"—and the exhaustion felt by everyone as they deal with what’s happening. (It also identifies the surreal feeling that sheltering in place has created: "Inside the blocks it may be Hell on Earth. But out here—out here the Judges have largely regained control … There are the refugees. The bug victims. And people simply driven out by hunger and desperation. But for all that, the streets are strangely peaceful.")

"Day of Chaos," as with so much of the accurate forecasting of Judge Dredd as a whole, is clearly not presented as an aspirational future, or something that humanity could reach if it applied itself hard enough. Instead, it's just a narrative of what might happen if a new, highly-contagious virus landed in an unsuspecting, and somewhat unprepared, region. In that respect, it’s another mirror of the world right now, where it seems the worst-case scenarios often come true, and everyone just has to deal with the outcome.