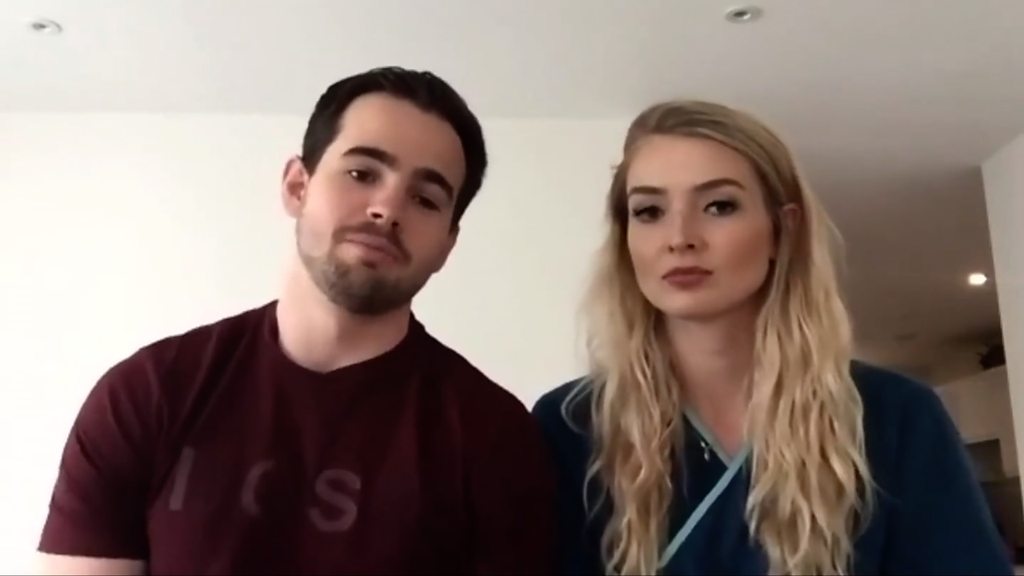 Brides and grooms say they are being charged thousands of pounds in cancellation and postponement fees for weddings that can’t go ahead because of the coronavirus lockdown.

While the majority of wedding companies across the UK have been flexible, a growing number of couples across the UK are locked in a battle with venues to get their money back.

Adam Gibbs, 36, and Sarah Summerskill, 33, from Woking, were told their dream day in May was off because of social distancing restrictions, but they would still have to pay the venue an 80% cancellation charge.

They had been planning their wedding for the last 18 months and were supposed to get married at Cain Manor in Surrey on 9 May – one of five venues part of the Bijou Weddings group. Their wedding package costs total £17,000, and the couple has so far paid £13,000.

However, the venue has now cancelled the event and told them to pay a cancellation fee amounting to 80% of the total cost of the wedding, as listed in their wedding contract. They were advised to claim the money back on insurance and then re-book the wedding.

But the couple has had their insurance claim declined on the basis that cancellation of the wedding and closure of the venue arose from a government order, and they feel “lost and hopeless”.

“The venue has still got £13,000 of our money and are still demanding additional payments [to fulfil the cancellation charge] in the next week. It’s not the kind of money you find down the back of the sofa,” Mr Gibbs told the BBC.

“It’s seems nonsensical to us that a venue can cancel on us and then charge us 80% [of the cost] without delivering a service.”

Initially, Bijou Weddings told the couple that they needed to pay the full cancellation charge for the wedding package, which amounts to £13,600. Since the couple had paid £13,000, this would mean they still owed the wedding company another £600.

But Bijou Weddings then said it would be willing to rebook their wedding date on another date in 2020 free of charge.

Bijou Weddings says that if customers are able to make insurance claims and get the cancellation fees refunded, then it will offer alternative dates later on this year or in 2021 or 2022 for rebooked weddings, and the new wedding would be charged at 2019 package prices. The company said it would also throw in a free bar float of £1,000.

And for customers who do not have insurance or could not claim on insurance, Bijou Weddings says it will rebook weddings free of charge and offer alternative dates, but only during 2020, and the wedding dates could not be on Fridays or Saturdays.

Some couples are still unhappy with the options given to them by Bijou Weddings though.

Jack Trowsdale, 27, and Claudia Dickens, 25, from West Sussex had already paid £21,000 for their wedding on 12 June at Botleys Mansion – another Bijou venue – when it was cancelled.

“We’d saved for so long and hard for it and then not only to find the wedding is cancelled, but to be told they think you owe them money for a wedding that didn’t even happen. It’s beyond belief almost,” said Mr Trowsdale.

The couple have both had their wages and hours reduced at work because of the virus. They told the BBC the excitement of planning their big day has been replaced by the stress of a full legal dispute.

They have since been offered an alternative wedding date on a weekday at no extra cost, but are seeking a full refund as “the ordeal has shattered” their hopes of a special day.

Sam Cutmore-Scott, managing director of Bijou Weddings said: “In our 25 years delivering weddings, this is the first time our venues have been forced to close. I should point out that Bijou has not voluntarily or arbitrarily cancelled any weddings – it has been forced to close its venues and halt weddings caught in the government’s social distancing restrictions.

“We have thus tried to accommodate the needs of couples who are immediately impacted, while still respecting our commitments to clients who have weddings booked in 2021 and beyond.”

He added that a majority of couples had successfully re-booked for a later date.

“Couples protect themselves from unforeseen circumstances by taking out wedding insurance which, in the normal course of events, covers cancellations that are caused by circumstances beyond the couple’s control.

“We sent cancellation charge information to all our impacted couples so that any with insurance could make a claim and make themselves whole again.

“We have not followed up or chased cancellation charges during this crisis period and, for those couples who do not have insurance or whose insurance is shirking their responsibilities, we have offered a broad variety of postponement options with no charge or rearrangement fee.”

‘They’ve backed us into a corner’

Due to existing bookings for next year, other wedding venues are finding it increasingly difficult to reschedule cancelled weddings for equivalent weekends in 2021.

Jenny Maybury, 39, and Michael Bromwich, 36, both from the Midlands, had their wedding moved from a Sunday in May, to a Wednesday in September.

Only 12 of the 75 guests could make the new date in September, so Jenny decided to ask the hotel for a refund of £5,355.

The venue, Abel’s Harp in Shropshire, told the couple no weekends were available, but has refused to compensate them for the difference in price, or for a reduction in the number of guests.

Unfortunately the couple do not have insurance for their wedding.

“They’ve backed us into a corner and taken it out of our control. We feel angry and heartbroken,” said Ms Maybury.

Another couple, Debra Bingham and her fiancé Jamie, who had booked the same venue, told the BBC they were told they’d have to pay £1,500 to move the date they had chosen this year to 2021, on top of what they had already paid.

Abel’s Harp did not respond when approached by the BBC for comment.

Lorraine Carroll has been in the wedding industry for over 30 years and is currently advising 250 brides and grooms who are in dispute with 15 different venues across the UK.

She accuses a small minority of venues acting “appallingly”, trying to profit through the coronavirus disruption and “making rules and fees up as they go along”.

“Clients are being treated disgraceful by venues and insurers are finding ways of avoiding paying out. Couples face losing thousands of pounds,” she said.

The Competition and Markets Authority has previously warned the wedding sector that excessive cancellation charges, even when contracts had been signed, are not legally binding.

In 2016, the authority, which ensures businesses treat customers fairly, wrote to more than 100 wedding and event venues reminding them of consumer protection laws.

The CMA says it is prepared to “use the tools at its disposal to intervene”.

Consumer rights group Which? says it has received complaints from other couples about wedding venue cancellations.

“It is unacceptable that some venues are refusing to provide any refund of couples’ significant upfront deposits or charging customers extortionate fees, particularly when it is not the couples’ decision to cancel,” said Adam French, Consumer Rights Editor at Which?.

“While many businesses will be struggling during this difficult time, it does not seem fair for customers to be charged fees or left thousands of pounds out of pocket for a service the venue can’t deliver.”

He added that businesses should take a “compassionate and flexible approach”.