Is the UK hitting these seven key coronavirus targets? 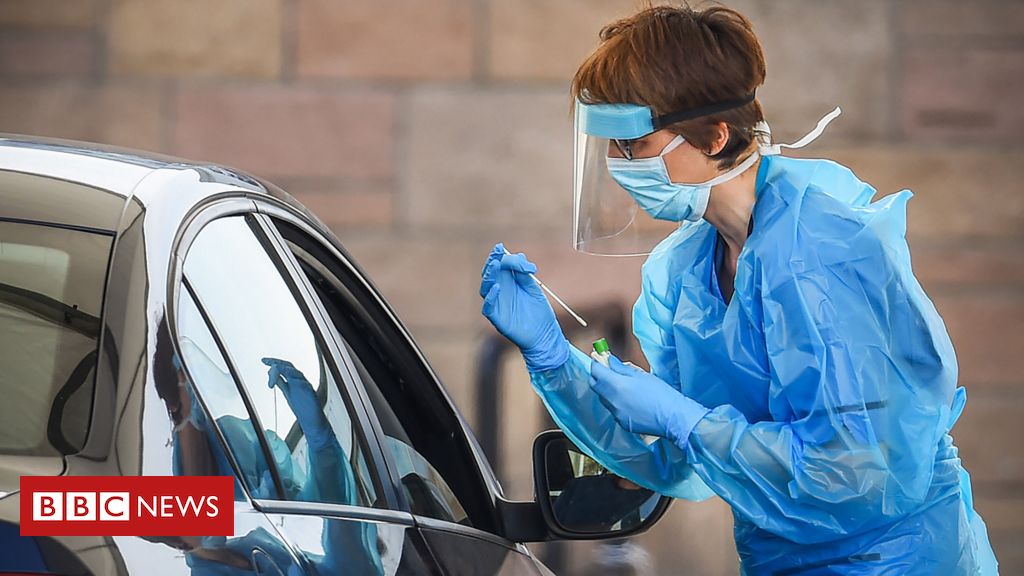 The UK government has set various targets during its efforts to tackle the coronavirus outbreak. Have they been met?

“We will massively scale up our testing capacity in the weeks ahead so we hit 25,000 tests a day” – Prime Minister Boris Johnson, 18 March

On the same day a press release from the Department of Health and Social Care (DHSC) gave more details of the tests to diagnose coronavirus and said “the increased capacity is expected to be ready within four weeks”.

When it comes to testing capacity – the amount of tests which could theoretically be carried out on any one day – that stood at more than 30,000 by mid-April.

“I am now setting the goal of 100,000 tests per day by the end of this month – that is the goal and I am determined that we will get there” – Matt Hancock, 2 April

With less than a week to go the government is a long way from its target.

He has suggested that not all of the tests are being used because of a “lack of demand” from NHS and other key workers. But the bodies which represent them say there have been problems accessing tests.

The devolved administrations in Wales and Scotland also made pledges on coronavirus testing.

Likewise, Nicola Sturgeon admitted at a press briefing on 23 April that Scotland was unlikely to achieve its original target of 10,000 tests per day by the end of April, saying “we are working towards a capacity of 3,500 by the end of April”.

“We are working with Boots and other partners to set up over 50 regional test centres around the country by the end of April” – Matt Hancock statement, 4 April

31 of the 50 regional test centres were operational by 23 April.

The “drive-through” test centres – for NHS and other key workers – are run by Boots and other commercial providers, with one walk-in centre run out of the Nightingale Hospital in London.

However, Local Government Minister Simon Clarke said that “some of these centres – in their early days – are in a pilot mode checking that they work, before they are brought fully on-stream”.

A DHSC spokesperson confirmed to the BBC they “expect 50 drive-through sites opened by the end of the month”.

4. Getting all care home workers the protective equipment they needed by late March

“On the personal protective equipment, the answer is by the end of this week.” – Boris Johnson, 25 March

On 25 March, Boris Johnson was asked in parliament when “every single person” working in care homes around the country would get the personal protective equipment (PPE) they needed and he replied: “The answer is by the end of this week.”

But that didn’t appear to happen. In early April, Nadra Ahmed, from the National Care Association, said: “The issue we hear most is: ‘I am desperate for masks. Has anyone got any gloves? I am down to my last stock.’ Once you run out, it is a question of being down to Marigolds and bin liners.”

According to those working in the care home sector, the situation has improved more recently but is yet to be completely resolved.

Martin Green, from Care England, said on 20 April that “access to PPE remains problematic” and that care homes still need “a consistent supply”.

A DHSC spokesperson said that by 20 April “over 900 million items of PPE” had been delivered “across the health and social care system within England”.

Concerns about the availability of PPE in care homes have also been raised in Scotland and Wales.

“Making sure that the NHS always has the capacity to treat patients is also mission critical” – Matt Hancock, 17 April

The government has met its objective.

On 22 April, the Health Secretary Matt Hancock told the House of Commons that: “We now have over 3,000 spare critical care beds in the NHS…three times more than we had at the start of this crisis.” He added that there are, in total, “10,000 beds currently free” in the NHS.

That figure does not include the extra beds made available in the temporary Nightingale hospitals which have been built to help deal with coronavirus cases (the total capacity in the London one, for example, is 4,000).

The government insists that nobody in need of critical care has been unable to get it due to a lack of beds or equipment.

So far, the government has managed to make 10,800 mechanical ventilators available in the NHS. Matt Hancock’s 18,000 target was for this type of ventilator, according to the DHSC.

The original UK target had been higher but was reduced, Mr Hancock said, because the lockdown and social distancing measures were working to slow the spread of the virus.

A spokesperson for the DHSC said: “Every patient who needs a ventilator has been able to receive this treatment and we are confident that there will be enough ventilators available for everyone who needs one. We continue to keep capacity ahead of demand.”

“I am making available an initial £330 billion of guarantees…that means any business who needs access to cash to pay their rent, the salaries, suppliers, or purchase stock, will be able to access a government-backed loan, on attractive terms” – Chancellor Rishi Sunak, 17 March

As well as support for larger firms, the £330bn scheme offers help to small and medium-sized businesses (SMEs) through the Coronavirus Business Interruption Loans Scheme (CBILS).

This involves the government guaranteeing 80% of loans to SMEs up to £5m made by various lenders such as High Street banks, as well as paying the charges and fees for the first year.

UK Finance, which represents the banking industry, said on 23 April that 36,200 applications for loans had been received so far, of which 16,600 had been approved. It said £2.8bn of loans had been guaranteed.

We do not know how much the government hoped would be lent out and indeed there is such uncertainty that the Office for Budget Responsibility (OBR) has not managed to cost the scheme so far.

“In an average week last year there was more than £1bn of new SME lending. The fact that CBILS are now only at that level at a time of the worst economic emergency in our lifetimes is a clear sign that they are inadequate.”

A Treasury spokesperson said: “More than 435,000 businesses have so far claimed £3.75 billion to pay the wages of furloughed staff – and half a million firms have benefitted from £6 billion of business grants.”

What claims do you want BBC Reality Check to investigate? Get in touch